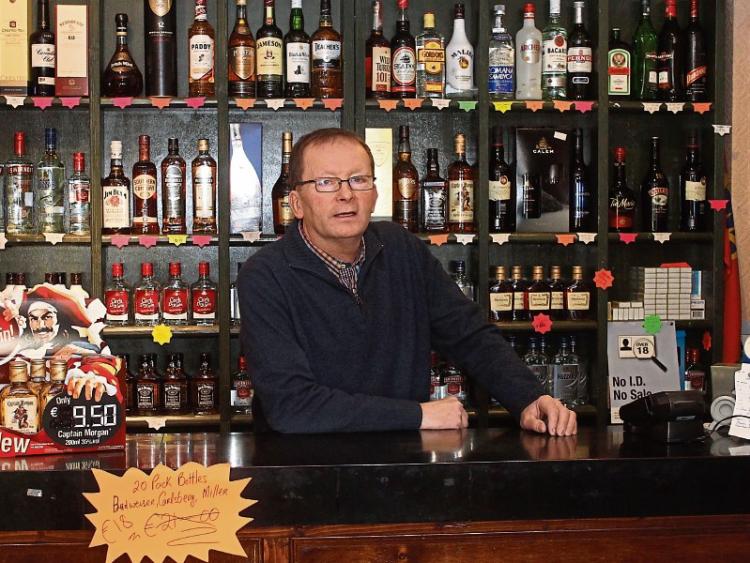 Due to the economic pick-up, Michael Lynch has seen spirits increase as well as the amount he is selling in the off-licence and pub Picture: Michael Cowhey

WHOEVER buys Lynch’s pub in Caherconlish will purchase much more than a licensed premises.

The name Michael Lynch is above the front door today – the same as it was in the 1840s. Remarkably, every owner has been called Michael Lynch.

The current Michael is the fifth generation to run the establishment and he has decided to call “time gentleman, please”. He started working in the family business when he was 15 and 45 years later he has put it on the market.

“I have given it a lot of thought but in the city there are businesses like Boyd’s, Newsom’s, Spaight’s, other pubs that have been there for generations, and you say to yourself they will never end but they have. I’ve thought a lot about the history side,” said Michael, who had a health scare two years ago and underwent a triple bypass.

“I spoke to my doctor and I said, ‘I hate to think it is going to finish on my watch’. He said, ‘You shouldn’t be thinking about that and think about the fact that you have been working in the bar for 45 years plus’,” said Michael.

Not only was his dad steeped in the publican trade, his mum Biddy (nee Ryan) had a bar on High Street, Caherconlish, which she sold to Jack Riordan. His brother Liam owns Pa McGrath’s in Boher.

Lynch’s is being sold as a going concern and has a loyal clientele. There is a front and middle bar, rear lounge, off-licence. Upstairs is a complete five bedroom house, albeit in need of refurbishment.

Michael is in excellent health now but being the proprietor often means 14-hour days.

“I’d like to have a little more time for the family and you are obviously busiest at Fridays and weekends,” said Michael, who is married to Valerie and they have three children - Julie, Michael and Joe.

His great great grandfather bought it from Murphy’s Brewery when it was a two-storey thatched pub. The thickness of the walls are a reminder of its long history. In the 1920s the Black and Tans raided it, threw all the drinkers out on the street and his grandparents thought they were going to torch it.

During his father’s time in charge a general merchants shop complemented the pub trade.

“We sold absolutely everything - coal, meat, fish, medicine, shoes, clothes, you name it. If you wanted a suit my father would measure you and go into Todd’s where he had an account. There was no transport in the Fifties and Sixties,” recalled Michael. It was a stopping point on the CIE bus route.

Passengers would get out to quench their thirst and a young Michael can recall all the parcels being dropped off as it doubled a courier service.

“I can remember getting boxes of chicks sticking their little beaks out through the holes for local farmers.”

Tragically, shortly after Limerick won the All-Ireland in 1973 his mother was killed in a car accident. Due to his father’s failing health the decision was made to close the shop and concentrate on the pub. A lounge was built where the off-licence is now .

Under Michael’s watch the pub thrived. He recalls monthly 45 drives – 15 tables of six competing for a fat pig. And after GAA club matches the men of Caherconlish, Caherline, Doon, Cappamore, Ballybricken and Fedamore would drown their sorrows or toast their success. Their golf society has been a huge part of the business for over 20 years and continues to be. Beside Michael pulling pints for the last 30 years has been Gerry Grant.

Lynch’s has been there for around 170 years and Michael agrees the pub culture has changed more in the last 20 years than it did in the previous 100 plus.

“People are more socially interactive these days with their mobile phones and Facebook, Twitter etc. Years ago there wasn’t a whole lot of places to go to meet people – the creamery, post office and pub were the main three.

“The creameries are gone, the post offices are largely gone and pubs are making the last stand,” said Michael.

The other big change has been the below cost selling of alcohol by supermarkets. Michael remembers a time when if you walked into a house and saw a bottle of wine with dinner you thought they were alcoholics. Now it is the norm.

But despite the changing times there will always be room for cosy pubs pouring a perfect pint of plain. Publicans are a good barometer for the mood of the population and he has seen an increase in their spirits as well as the amount of spirits he is dispensing due to increased footfall.

“You definitely can see there has been a pick-up. The population of Caherconlish has increased a lot with the housing estates and if the mining takes off after all the exploration it will be huge for the area. It is a busy bar and we are after a very good Christmas.”

But Michael’s mind is made up and he wishes to thank all his loyal customers over the decades.

“There have been some fantastic characters. If I started with the stories I wouldn’t stop.”

Gordon Kearney, of Rooney Auctioneers, is handling the sale and there have been a number of enquiries and viewings to date.