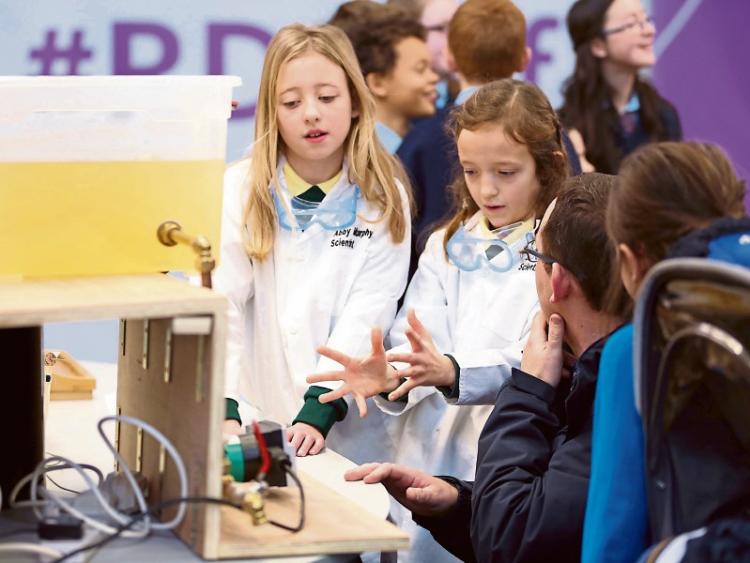 CHILDREN from all over the city and county arrived in their masses, at Mary Immaculate College, to explore a world of science that is much different to the one they are used to in their regular classrooms.

But it was in the classroom where the young innovators created their unique projects to be presented at the first RDS Primary Science Fair in Limerick, last weekend.

Between the fair that took place in Dublin and the exhibition that was inaugurally held at MIC on Friday and Saturday, pupils from more than 20 local primary schools relished the opportunity to conceptualise a scientific project and then to present it to hundreds of interested spectators.

The Limerick Leader, too, got the opportunity to learn from the children’s discoveries, over the weekend.

On Friday, five city and county schools — of 30 in total — were the first of the weekend’s Limerick lineup.

Representing the city were the kids from the Limerick Learning Hub, New Road, who each investigated the environmental factors that contributed to plant growth.

Meanwhile, pupils at Glenbrohane National School, in Garryspillane, found out which liquid is best used to prevent an apple from turning brown.

“The liquids that we used were water, vinegar, oil, salt water, freshly-squeezed lemon juice, 7up and milk, and then we used a control with no liquid,” one pupil began to explain.

“You can see that with the lemon juice it held the apple very, very well. Freshly-squeezed lemon worked the best — it held it off the longest from the brownness, and the acid preserved the apple.”

Also examining apples and fruit were the young scientists at Courtenay National School, Newcastle West, who were trying to find out which fruit juice had the highest vitamin C content.

The pupils said that they were “very surprised” with their findings, as they found that the more expensive products had the highest sugar content, but lowest in vitamin C. Orange juice that is 100% squeezed, they said, is the best source for vitamin C.

In light of the recent flooding that has affected Limerick, pupils at Scoil an Spioráid Naoimh, Ballysheedy, looked into the different local weather patterns in 2015 and 1995, and they found that the weather nowadays is “a lot warmer and a lot wetter, with more storms”.

Castleconnell National School pupils put the question: “Does listening to music while working improve your work?” They discovered that is does, but only in some aspects.

“We all do work, we all listen to songs, so we went to a few classes below us, and we gave them a few maths sheets,” explained a pupil. “And what we found at the end of the five weeks was that listening to music increases speed, but it lowers accuracy, and that rock music improves speed the most. Classical music improved speed the least.”

Teacher and project supervisor Therese O’Callaghan said that it was a “successful project” for the kids, but she wouldn’t advise her pupils to listen to AC/DC during their homework!

On the Saturday, from 10am to 3pm, nearly half of the participating pupils — from Munster and Galway — were from Limerick.

After studying microbes and diseases, the kids at St Paul’s National School tasked themselves with finding the best way of washing your hands, in order to stop the spread of germs. One of the scientists concluded:

“The most effective way to stop the spread of germs is to wash your hands all over for at least 20 seconds in warm water and soap.”

Caherconlish National School teacher, Eoin Maloney wanted to mix science and everyday life together in one lesson, so the Pallasgreen pupils investigated the perfect way to score a goal in soccer.

“They worked tirelessly at this project. Every Thursday and Friday, 5th and 6th class students work on coding for the last hour, and they work with Microsoft Excel and Powerpoint, and all that came into being with the experiment.

“We started the experiment before Christmas, and we worked out the mathematics of football, comparing left-footed kickers to right-footed kickers, girls and boys.

“We wanted to do an experiment where people wanted to be active, and we wanted to take away the stereotypical views about science; that it was ‘nerdy’, and that subconsciously children are doing science,” he explained at the fair.

Girls at St Anne’s Primary School, in Rathkeale, wanted to investigate how to make the perfect sponge cake. Their teachers Aileen McMahon and Therese Ryan acknowledged that the town had a strong history in bakeries, which they said influenced the project.

Meanwhile, at the other side of Limerick, pupils at Scoil Íde, Corbally, were intrigued by how touchcreen technology works, after noticing teacher Pat Butler’s old-fashioned Nokia — with buttons.

“We decided to investigate how they work, and that led us onto using coding and capacitive touch sensors. They found out that the human body stores electricity, so when swiping a phone, or an iPad, your hand will interact with the device. They were absolutely blown away by it. They were also fascinated by my old Nokia!”

Minister for Education and Skills Jan O’Sullivan launched the event on Fridat afternoon, and said that she was “delighted” that Limerick was able to host the event for the first time.