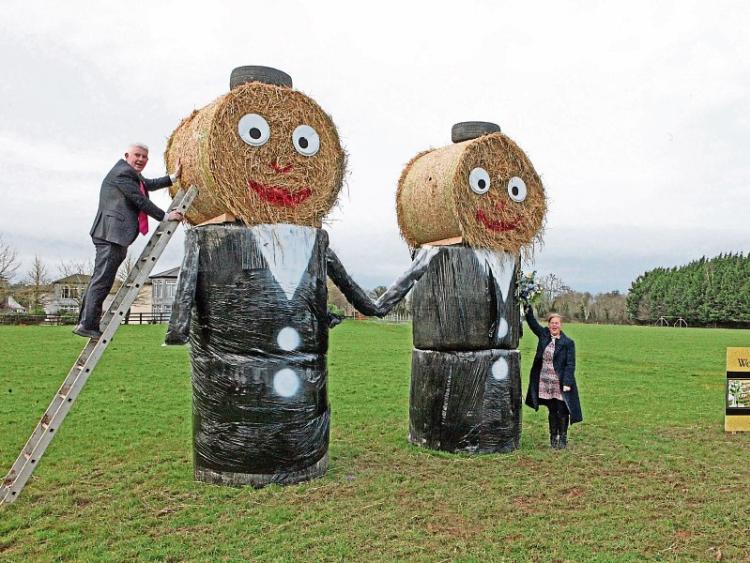 Love is Golden: David and Elaina Fitzgerald of the Woodlands Hotel putting the finishing touches on one of their straw bale couples this week Picture: Dave Gaynor

A local hotel is celebrating marriage equality, with giant same sex couples made of straw bales featuring in the marketing campaign for its upcoming wedding fair.

To promote their ‘Love is Golden’ wedding fair, the marketing team  at Fitzgerald’s Woodlands House Hotel erected four hay bale couples, one at the side of the main road outside Adare village and three more are at the entrance to the hotel itself.

Susan Burke, marketing manager with the hotel, said they have been getting a “great reaction” since the figures were put in place at the weekend to promote the upcoming wedding fair, which takes place on January 31.

“They went viral online and we started getting a lot of people ringing up about taking stands. They are definitely building interest for the day,” she said.

In light of the Yes vote in the marriage equality referendum last May, the hotel decided it would be a good opportunity to include same sex couples, along with the traditional bride and groom. “The focus was to highlight the fact that we cater for all types of weddings. We are not specifically trying to get more same sex weddings in; we are saying that everyone is welcome,” Susan explained.

She added that since the referendum has passed they have received a lot more enquiries about same sex marriages.

The hotel is already booked out for weddings for the rest of this year but in an increasingly competitive market, they are always looking for new ways to make that big day unforgettable.

“It is about constantly trying to do something different every day,” she said.

“Out of 120 weddings this year, there are none that will be the same.”

Assembling each of the eight figures involved using a mini crane to lift the bales into place, before dressing them in their wedding finery.

“A lot of work went into it,” commented Susan.

A time-lapse video of the figures being assembled had already got over 8,500 views on facebook by this Wednesday afternoon.

The wedding fair runs from 4pm to 7pm on January 31. Entry is free and there will be live music as well as 15 standholders displaying their fares in the banquet hall.