Tickets snapped up for The Coronas at King John's Castle 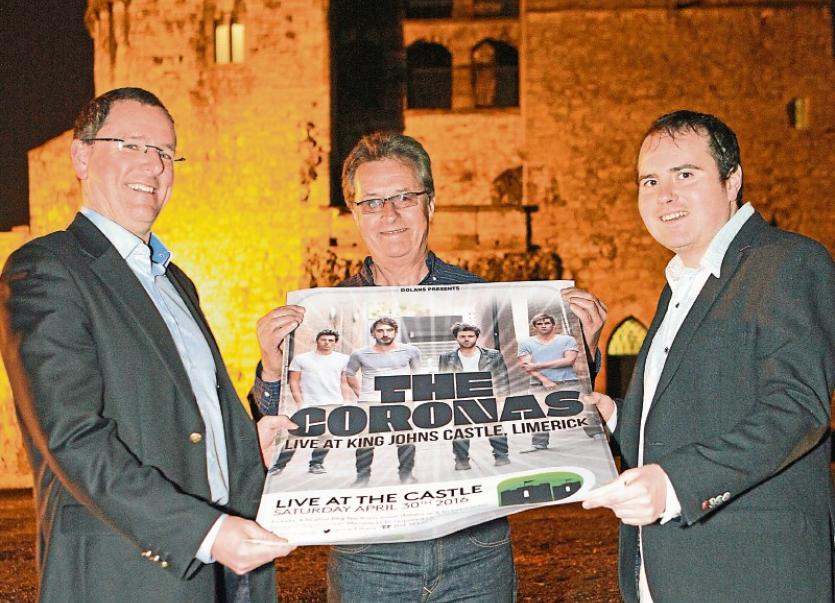 ALL 2,000 tickets for The Coronas’ gig at King John’s Castle in Limerick on the May Bank Holiday weekend have sold out, just over an hour after going on sale.

The gig is the first in a planned new series of shows at the 13th century castle, and plans for follow-up gigs will have received a boost with the inaugural show by one of Ireland’s top bands selling out in rapid time.

The Coronas will play in King John’s on Saturday, April 30 and Shannon Heritage CEO John Ruddle – running the gig in tandem with bookers Dolan’s in Limerick – said the much anticipated gig had proved to be the “hottest ticket in town”.

“We are delighted with the tremendous success of the event and the speed of ticket sales,” he said.

“It just shows that when you combine a great band like the Coronas with a unique venue like King John’s Castle you have a recipe for success.

“We are looking forward to welcoming Coronas fans who are in for a truly memorable night.”

Shannon Heritage believe that King John’s Castle offers an ‘ideal amphitheatre’ for gigs and plans are in place to run shows there “in the long term”.

Exactly five years to the day since becoming the first band to play in the Milk Market – or ‘Big Top’ – The Coronas will be the debut act at the planned for new series of gigs in the castle.

Mick Dolan said this week that he was “working on” getting more acts and while he said there was “nothing concrete this minute that we can announce, we are working on it”.

“This is an ongoing, long term project, this isn't a one off project - this is long term, this is going to keep happening.”

Shannon Heritage CEO John Ruddle said that there was “no better band” than The Coronas for the first gig in the castle since The Frames in 2004, and he said the top Irish band were a “perfect mix” for the body and King John’s Castle.

“We are certainly focused on making this a great success. Of course if this is good, this will lead to other things and we do hope to follow this up and possibly have more alternative uses of the castle after that,” he said.