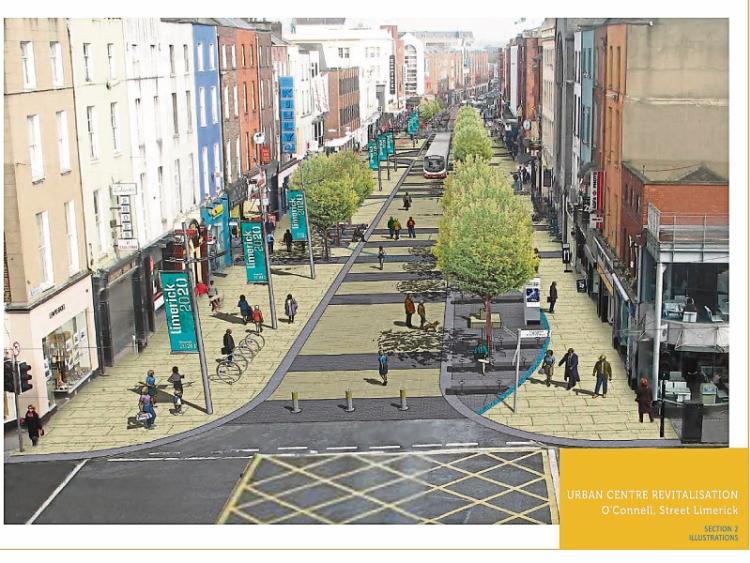 An impression of the revitalisation of Limerick city centre, which has received European funding. Picture: Limerick City and County Council

UP to €8m is to be spent ‘enhancing Limerick’s urban centre’, it has been announced.

A proposal from Limerick city centre has secured around €4.1m from the European Regional Development Fund, which is in turn to be matched by the local authority.

Financing for a range of urban enhancement projects – €40m in total from the European development fund – was announced this Tuesday afternoon by ministers Alan Kelly and Paschal Donohoe.

Limerick City and County Council said in a statement that it had, as lead designated authority in collaboration with Clare County Council, secured €4.5 million in EU funding from the Southern Regional Assembly’s Operational Programme 2014-2020 to “support sustainable urban development” for a project called the Limerick-Shannon Gateway”.

€4.1m will be spent revitalising O’Connell Street while an allocation of €400,000 is to be spent by Clare County Council in improving the Town Park in Shannon.

Work on O’Connell Street is expected to commence later this year and will last for 12 months, with up to 50 construction jobs a spin off from the investment.

The council said the works would give “a boost to retailers and ratepayers in the city, who will see the direct visual benefit of a transformed urban core with high quality footpaths, bus and cycle lanes, soft landscaping and a much-improved streetscape”.

“This successful application for funding was borne out of a collaborative approach taken by both local authorities to identify and present key shared goals, while making the difficult choices between competing needs so to identify two key priority projects of strategic importance to our shared Gateway,” explained Mayor of Limerick City and County, Cllr Liam Galvin.

Education minister Jan O’Sullivan has welcomed the investment, calling it a “positive development that will further enhance our revitalised city centre.

“The direct grant of €4.1m, funded by European Regional Development Fund, will be matched by funding from the local authority – resulting in a potential €8m funding for important improvement works.

“The capital funding will be used to enhance public spaces, widen footpaths, re-align bus corridors and provide better traffic management in the city.

“Limerick city’s core urban area is being transformed.  The bike scheme, the riverside boardwalk and the initiatives by the local authority and businesses to make the city centre increasingly attractive are just some of the efforts that are paying dividends.

“Recent decisions by LIT and UBER to locate new ventures in the heart of Limerick is hugely important.”

“This investment will assist the efforts that all those who love Limerick are making to revitalise the city centre and is very welcome.

“I would like to acknowledge the very positive role that Conn Murray and his team in the local authority have played in designing this project and securing the funding,” added Deputy O’Sullivan.

The project will seek to “improve the public realm, regenerate urban fabric, reduce air pollution and promote noise reduction” as well as aiming to “promote walking, cycling and public transport to/from/around the urban centre; and introduce sustainable travel information to the urban core”.