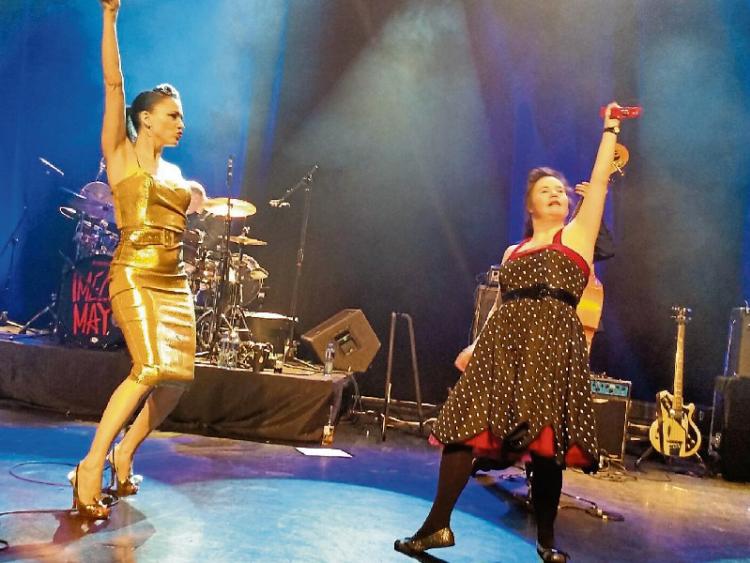 A YOUNG Limerick woman’s dance moves have gone viral on social media after she stole the show at an Imelda May concert.

Maura Ryan, aged 26, is a massive fan of the Dublin-born rockabilly singer. The Cappamore lady, who is a member of Down Syndrome Limerick, attended the show in the INEC in Killarney with mum Mary and sister Caitriona.

Maura was dressed to impress in a polka dot 1950s dress and even had her hair styled like Imelda’s famous quiff. But when the moment came to strut her stuff she wasn’t afraid to let her hair down.

Maura has met Imelda at a number of concerts in the last couple of years and when the singer recognised her, she said: “We need to find a way to get you up here on stage”.

Caitriona, sister, said Maura was delighted to get the opportunity to perform with her hero. She is such a big fan that she even attended one concert while her back was in a brace.

“Lots of willing volunteers helped to lift Maura up and the rest is history. She stole the show. What followed was a dance-off between the two. Maura has a big passion for dance and Imelda gave her a bit of space to dance. It was phenomenal.

“After the show so many people in the INEC came up to Maura complimenting her and shaking her hand - she even posed for some photographs.

“After the excitement Maura kept saying ‘I did it, I did It!’ It was very clear that this really made her night. She was very at home on stage thanks to Imelda. The crowd’s reaction was unreal , it was just a great moment.

“Our hearts were bursting with pride , it was a great start to the New Year,” said Caitriona, who recorded it on her phone and was encouraged to share it.

The talent, energy and joy displayed in Maura’s performance has certainly struck a chord with over 100,000 views and counting. Some even thought it was rehearsed and planned because it was so perfect.

“We are delighted with the feedback from our decision to share it. Maura’s Downs is only one part of her. A lot of families would be in a similar position and could identify with this. And particularly for parents of new born children wondering what is ahead.

“Maura has always enjoyed social occasions and outings. She is a very resilient and vibrant young lady, we think she is a great advocate for Down Syndrome adults nationwide,” said Caitriona.

Due to her dance moves it is no surprise that Maura never misses Down Syndrome Limerick’s hip hop and drama classes every Saturday.

Caitriona wished to say a massive thank you to Imelda May for making it all happen.

“She is such a lady to consider Maura and give her that attention and time. It made the night and kicked off 2016 brilliantly for us,” said Caitriona.

“She is good at technology and has the video on her phone. She loves showing the video when she meets people,” concluded Cait-riona.