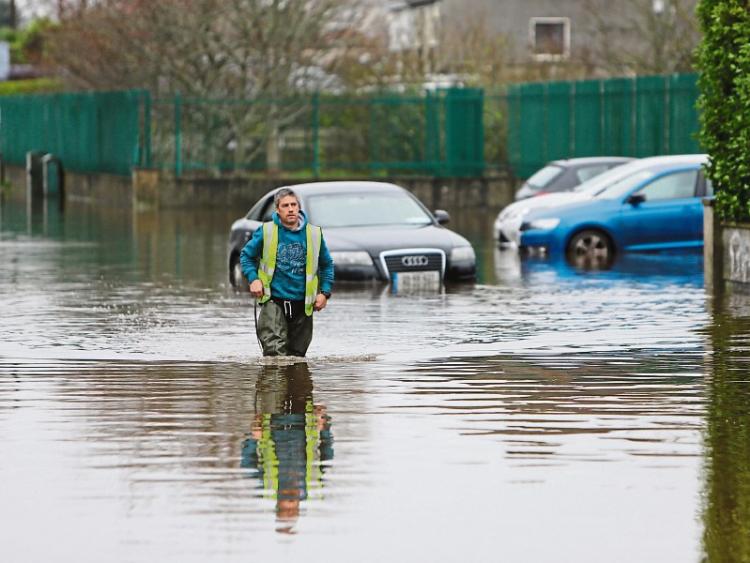 The scene in Richmond Park, Corbally on December 13, the day after the issue arose with the lock gates

Waterways Ireland has come in for more criticism for its handling of the flooding situation in Corbally last month.

A special meeting of Limerick City and County Council heard that the council had spent €500,000 so far dealing with the severe flooding of the past month. However the full repair cost is likely to come to as much as €10m.

Referring to an incident in Corbally on December 12 where a number of houses in Richmond Park were flooded when locke gates on the Park Canal could not be opened to release water, Cllr Kieran O’Hanlon said Waterways Ireland – who manage the canal – had to take some responsibility for what happened. “What happened in Corbally could and should have been prevented if Waterways Ireland were doing their work property,” the Fianna Fail councillor told the meeting. He called for another set of lock gates to be installed in order to prevent a similar situation arising in the future.

Council engineer Vincent Murray outlined how, after getting reports that the canal was overflowing in Corbally, council staff initially tried to open the lock gates but failed. They then contacted Waterways Ireland, but the lock keeper was also unable to open the gates. They were finally able to prise open the gates using an excavator. However, by that time one cottage was badly flooded and 12 other houses were also affected.

The engineer also outlined how the flood relief efforts were undermined by “ongoing messing and vandalism”. This included throwing sandbags and warning signs into the river, switching off pumps at night and making hoax calls to the emergency services.

Cllr O’Hanlon claimed that, on the night the problems arose with the canal in Corbally, the fire services had to leave the scene as a result of a hoax call.

Some councillors also questioned the future of the proposed Northern Distributor Road given the level of flooding along the proposed route. Sinn Fein’s Seighin O' Ceallaigh wondered whether the construction of the road would worsen the flooding situation, while Fine Gael’s Michael Sheahan commented: “I hope the Northern Distributor road as planned is now dead in the water, pardon the pun”

Cllr Michael Hourigan pointed out that having 60 agencies responsible for managing the Shannon was too many.