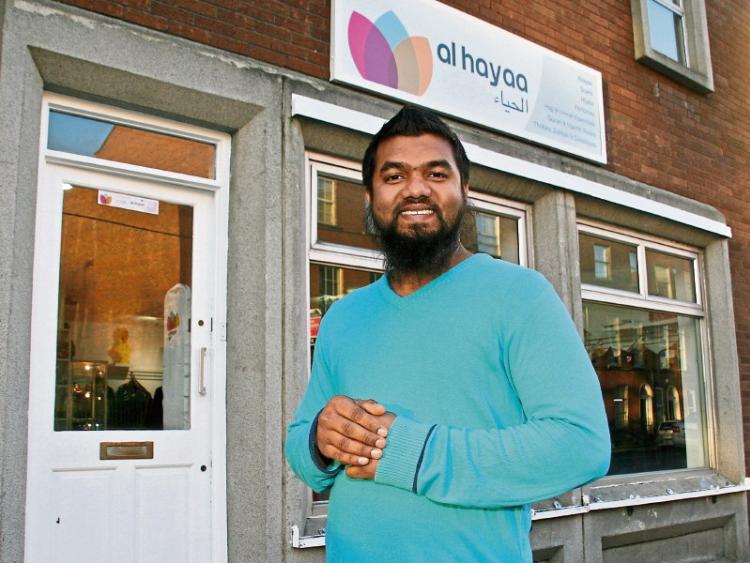 Foysal Khan, from Bangladesh, has opened what he believes is the first Islamic clothing store in the entire country, called Al Hayaa and situated on Henry Street

AS LIMERICK'S Muslim population continues to rise, a Bangladeshi man has opened what he claims is the first Islamic clothing store in the country on Henry Street.

Foysal Khan, who is a research assistant in the the areas of physics and energy in the University of Limerick, opened the store, Al Hayaa, meaning ‘modesty’, to cater for the growing Muslim population in the Mid-West.

It is estimated that there are now more than 2,000 Muslims living in Limerick, among some 49,000 nationally, with four mosques locally - in Pennywell, Windmill Street, O'Connell Street and in Dooradoyle.

“In Dublin you have some stores with food and clothing for Muslim people, but not entirely for Muslims. At the moment we have no competition, but we want to offer quality clothes at a reasonable and generous price,” he told the Limerick Leader.

Mr Khan, who moved to Limerick eight years ago to begin his studies, said he has largely found Limerick to be “warm, welcoming and friendly”. However, he said he has been called a “terrorist” on the streets of the city, particularly co-inciding the terrorist attacks in Paris last November and January. He said he would love to see more interactions between the different communities to end misconceptions surrounding Islam.

”What you see on TV or in the media is the complete opposite of what’s in my book [the Qu’ran] and my rulings, so how could a Muslim do such things?” To counter some perceptions of Islam, he said he has also handed out leaflets on ‘What is Islam?’, on O’Connell Street, only for people to deliberately and repeatedly knock over his stand.

“Another time someone spat at me and I have been told ‘You’re a terrorist, get out of my country’. But I don’t really react, because Islam teaches us tolerance. The Muslim population has become more vulnerable [after these terrorist attacks]. But these people [who insult us] are in a minority. Their accusations are false. I am here almost 10 years and it feels like home now.”

Mr Khan’s wife, from Pakistan, who wishes to be known only as Mrs Khan, manages the shop while he works in UL, or while he answers the call to prayer – five times a day at the nearby mosque in Henry Street. She has her own room in the shop to pray, while it is predominantly men who attend the mosque. “Praying five times in the whole day is not a lot, not for Allah and what he has given us,” she said.

Some 500 people regularly attend the nearby Alfurqan Muslim Community Centre on Windmill Street, just off Henry Street, which faces east towards Mecca. It is open from 7am to midnight.

Mrs Khan said they were inspired to establish the business as they couldn’t find a good selection of clothes suitable for them in Ireland. ”I would have to call my mother in Pakistan to send me clothes, or find something online but they are more expensive,” she explained.

“We have a lot of Irish people coming in here now. They are curious, and have admired our pashminas walking past. The response has been very good and we are very happy with it. We miss our families, but we have our community here,” she said.

The shop sells prayer mats, copies of the Qur’an (Koran), other Islamic books, as well as traditional dress for men, women and children, including hijabs and abayas. The clothing has been imported from Saudi Arabia, England, among other countries.

The abayas or cloaks for women are largely black, but with some embellishment, while men’s clothing can be in paler colours. He said they have many modernised abayas “purely for women to enjoy”. “This type of clothing is very important for women because of their religious beliefs. It is not invented by men – it’s a command from God, and it’s in the Quran. God does not want us to do something which is not good for us, and this is our duty. If you see pictures of the Mother Mary, is she wearing a mini-skirt? No. Or with naked hair? No. She’s wearing hijab actually, similar to Muslim women today.” He said the women’s clothing is about showing modesty and self-respect, “and not attracting people to you.”

They currently have a 20% discount.