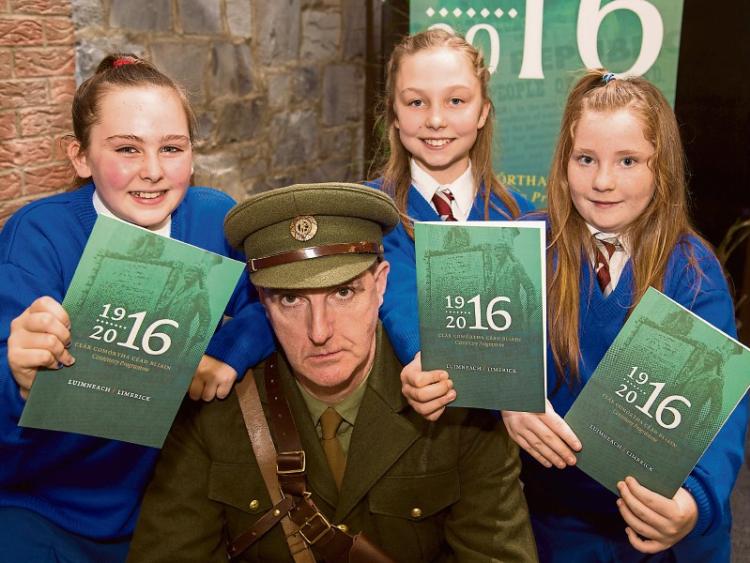 A re-enactment of a march by 300 Irish Volunteers, a genealogy exhibition, memorial gardens and a relay run all form part of Limerick’s plans to mark the centenary of the 1916 Rising.

Limerick City and County Council launched its Ireland 2016 Centenary programme on Monday night in the Granary, the fruits of consultation with interested local individuals and groups interested in marking the seminal moment in Irish history.

The council, which has put in place a local 1916 co-ordinator – Damien Brady – launched a series of events under the seven strands of the national Ireland 2016 programme, with the Irish Defence Forces represented at the event.

Mayor of Limerick City and County said it was a “comprehensive programme of events represents the outcome of many hours of reflection, consultation and discussion involving hundreds of people all over Limerick.

“I am particularly happy that it celebrates our National Flag, our Proclamation, our Army, and above all, those who fought and died for our independence,” he said. “I am pleased to note that the programme also acknowledges the key role that women played in the Rising. Our children and young people are central to the programme, which aims to capture their imagination so that they may better understand the events of 1916.

“My hope is that 2016 will belong to everyone in this City and County and indeed on this island, regardless of political or family background, or personal interpretation of our modern history.”

Conn Murray, CEO of the council, said a “diverse range of events” had been assembled for Limerick, stressing that the “story and events of 1916 belongs to all of us regardless of political or family background, or personal interpretation of our modern history.

“This programme is an opportunity for us to showcase some of the fantastic creativity and innovation which is taking place across our community and I look forward to ensuring that next year will be a truly once-in-a centenary experience for our citizens and our county,” he said.

Some of the events planned for Limerick City & County Council include:
- A re-enactment of a march by 300 Irish Volunteers to Glenquin Castle to receive a shipment of arms.
- ‘Roots of the Rising’ – the family history of Ned Daly and Con Colbert by Limerick Genealogy.
- Memorial Gardens will be erected at Limerick City, Newcastle West, Kilmallock and Rathkeale.
- ‘As If She Had a Right to be There’ – an exhibition of drawings by Ashlinn O’Keeffe relating to women’s involvement in Irish Struggle for Independence..
- Rith 2016 – a nationwide relay run to celebrate the Irish language will be visiting Limerick on 8th March 2016.
- ‘1916 Today – An Anthology of Reactions’ by Limerick Writers Centre.

The Ireland 2016 Centenary programme is available at www.ireland.ie.