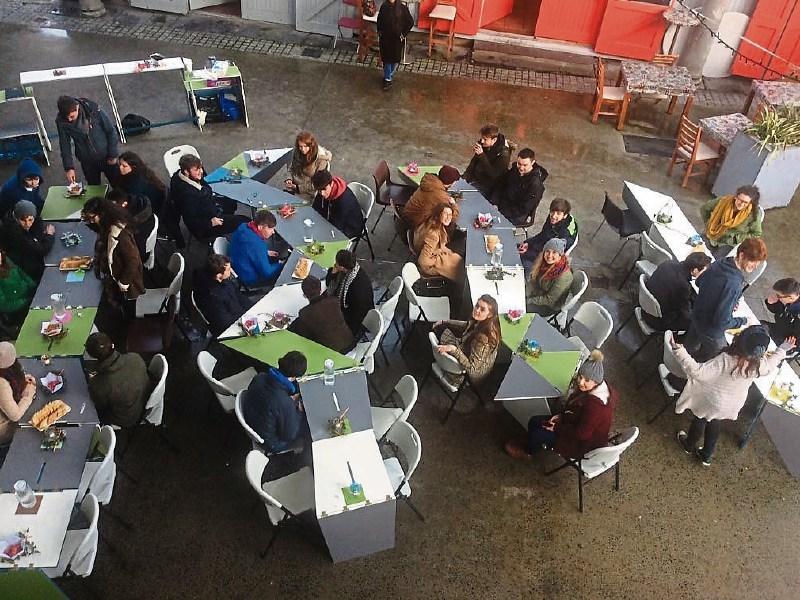 STUDENTS of the University of Limerick’s school of architecture are doing their bit to support refugees in the Calais camp.

They have built lightweight tables, along with other equipment, and will send them to the camp, hopefully in time for Christmas.

As the Milk Market’s festive lights were turned on, the students, and their lecturer Grainne Hassett held a solidarity lunch where they put some of their work on display.

As well as this, they offered food which reflects the cuisine of those in the refugee camp.

On the menu was Afghan spicy vegetable curry, and sweet cakes from Syria.

Grainne said: “A lot of people in Limerick have been working to welcome refugees and people living as refugees here. We have made some tables in the school of architecture which are collapsible. We will be bringing them out to the Calais camp for their library, theatre and children's centre too.”

Grainne – who visited the camp earlier this year – described it as a “triumph of human dignity with some of the most amazing people I have ever met.

“Although the food in the camp is amazing, and inspired by so many different cultures, people do not have enough to eat,” she stressed.

One of the students Greg Lotter, from Kilaloe, designed one of the tables. He explained: “We were meant to make tables for eight people using two sheets of plywood.

“Each table is collapsible. It folds up, and can be carried by just one person. That was the goal.”

The lightweight table, he added, was three weeks in the design stage, to ensure it weighs just half a sheet of plywood.

He said: “It is very important for everyone out there to do their bit for the refugees not only in Calais, but those who are struggling in the Balkans and around the world. We must give a helping hand during this Christmas period.”