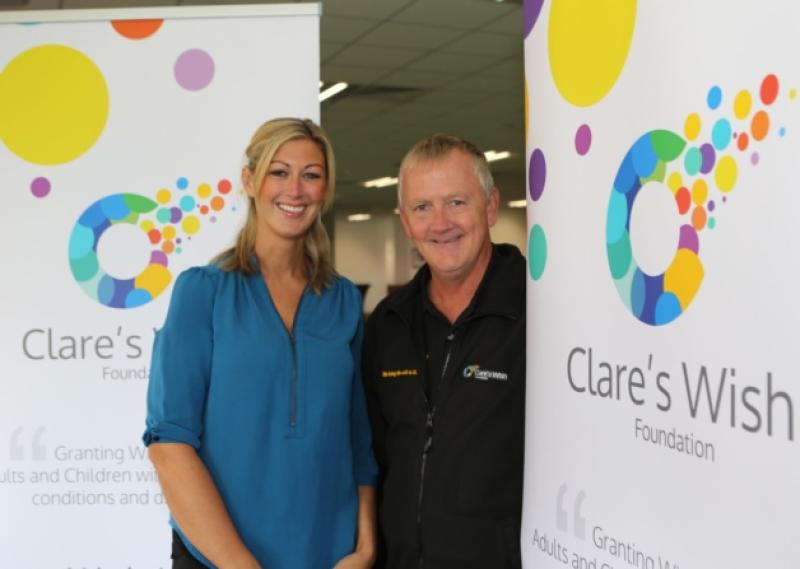 THOMOND Park has been a theatre of hopes and dreams for decades so where better to launch a charity that aims to grant wishes.

THOMOND Park has been a theatre of hopes and dreams for decades so where better to launch a charity that aims to grant wishes.

Kevin Clancy, of Clare’s Wish Foundation, and Elizabeth Hickey, hospitality and events manager at Thomond Park, met last week to discuss the official launch of the charity in the stadium on Saturday, October 12 at 8pm.

It is the only Irish charity to grant a wish to children and adults with life-threatening conditions and disabilities. Clare’s Wish Foundation is the brainchild of Kevin Clancy from Toomaline, Doon.

“The whole journey to where I am today started in June 2011. My dad Sean passed away in the intensive care unit in the Mater hospital after a six month battle with pancreatitis.

“It hit me hard, made me look at my own life and I felt the urge to help others,” said Kevin, who has over 25 years of retail, business and marketing experience, and is a former director of a small retail chain of motor shops.

In 2012, Kevin started to do some volunteer work.

“I Joined St John’s Ambulance - my dad was an ambulance driver with the HSE for over 25 years - and I also joined Share A Dream in Limerick,” said Kevin, who also wanted to do something on his own and so Clare’s Wish Foundation came into being in April of this year.

“Clare was my late sister. She passed away several years ago aged just 24 with Spina Bifida. We are the only charity in Ireland that grants a wish for adults and children,” said Kevin. As children they were very close, and he was her constant companion throughout their childhood years.

Clare was a big fan of Red Hurley and at one of his concerts the singer spent a lot of time with his sister and sang to her. He autographed an album with the message, ”To my darling Clare, with all my love, thank you for your thoughts and everything, with love, Red Hurley.”

Clare’s wish came true that day and she never forgot it. Neither did Kevin.

He saw how much this meant to his late sister and now hopes to replicate moments like this for others in similar positions.

While the launch night of the charity hasn’t even taken place yet, they have already granted their first wish.

They donated the photographer, car and music on the wedding day of a young lady battling cancer. He makes the point that if the charity only helped children then it wouldn’t have been able to grant that girl’s wish.

And to support many other causes like this they are hosting a launch night full of fun and music in Thomond Park on Saturday, October 12 from 8pm.

Finger food, raffle and spot prizes will round off a great night.

Tickets can be purchased - €20 and €10 for students - through their e-mail clareswishfoundation@gmail.com or on the door on the night. Thomond Park have kindly given the room for free and all proceeds will go to the charity.

Kevin says they are also looking for walkers and runners in the UL Womens Mini Marathon on October 12. Just email your details to clareswishfoundation@gmail.com

“We will provide a free T-shirt and also free entry to our launch night. So run and then enjoy a night out at Thomond,” said Kevin.

And help the charity on their journey to help others.