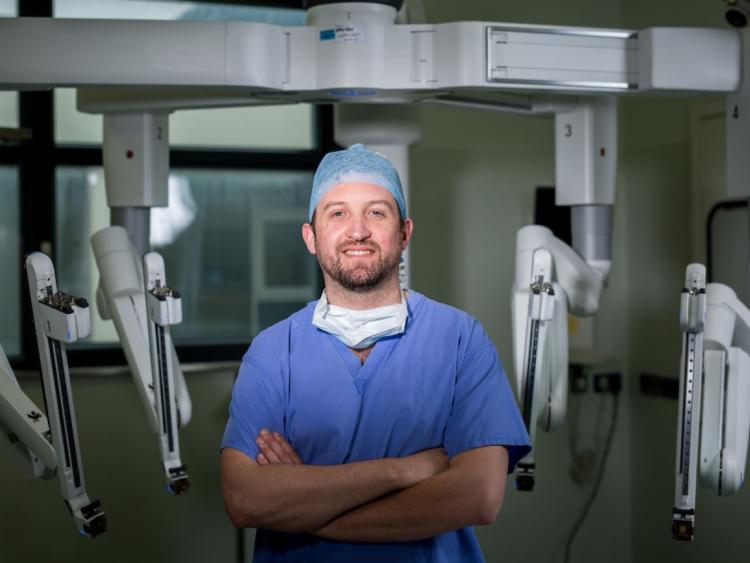 UHL-based colorectal and general surgeon Colin Peirce has been bestowed with one of the most prestigious honours a surgeon in Ireland can receive, when he was chosen to deliver the 43rd annual Millin Lecture for 2020.

A significant event in the RCSI calendar, the Millin Lecture is traditionally delivered during the College’s annual Millin Meeting each November, before an audience including the lecturer’s loved ones and hundreds of surgeons from all across Ireland.

This year, in line with public health guidance on social and physical distancing, Mr Peirce had to pre-record the Lecture, for online transmission during the College’s virtually hosted 2020 Millin Meeting week as part of the 2021 Charter Day Meetings.

Electrodes to robots - evidence based change in surgical practice

Distancing has not diminished the honour Mr Peirce feels for the recognition by his peers of his contributions to practice nationally and internationally, and for what the honour means for UL Hospitals Group.

The Millin Lecture is named in honour of the remarkable Irish surgeon Terence Millin, who is regarded as Ireland’s greatest urologist. Millin developed a radical operation for prostate cancer and trained surgeons worldwide to perform it, and he also played international rugby for Ireland in 1925.

Millin was also a two-term President of the RCSI. Recipients of the lecture honouring Millin are nominated by Fellows and selected by a panel of Council Members of the RCSI.

Those who receive the honour are drawn from all surgical specialties and will be either advanced in surgical training or in their first five years in consultant practice.

Mr Peirce, a native of Crecora, County Limerick, who was appointed to UL Hospitals Group as a Consultant Colorectal and General Surgeon in November 2016, is best known for his work on the pioneering robotics team who use the Da Vinci Xi Dual Console robot to perform colorectal surgery, delivering unique and nationally unparalleled surgical options to patients in the Mid-West region.

Immediately prior to his appointment, Mr Peirce had completed a year of international fellowship in the world-renowned Cleveland Clinic, Ohio, with a strong focus on robotic colorectal surgery.

Recently, Mr Peirce and the Robotic Colorectal Team at UHL made a breakthrough for treatment of early stage bowel cancer in this country by performing the first Robotic Trans-Anal Minimally Invasive Surgery (TAMIS) operation in Ireland.

Although his lecture focused in part on TAMIS and other robotic surgeries, Mr Peirce also covered other research which has been one of the cornerstones of his career to date. He has received a number of national and international awards and accolades and is a keen contributor to the surgical literature.

“I have a huge interest in surgical site infection, which in layperson’s language is what happens when the healing wound from an operation becomes infected. Unfortunately, this occurs worldwide more commonly than we would like, so I’ve designed and run a number of trials in Limerick and we’ve shown how we can reduce the incidence of postoperative wound infection," he explained.

“This is very important, because that kind of infection adds greatly to the patient’s healthcare costs, increases the time a patient needs to spend in the hospital and is also draining for the patient as it can take a number of weeks for a wound to heal. In one of the trials we were able to reduce the infection rate four-fold by applying a different sort of dressing – termed a negative pressure wound therapy dressing. This garnered a lot of international debate, led to the publication of further trials and ultimately, this has become a recommendation worldwide. It has sparked a lot of interest in the field and it is great to have been involved with something that can be described as ‘practice changing’,” he added.

Mr Peirce said he was very proud to have been awarded the honour of delivering the Millin Lecture. “My own hopes for the lecture would be that people would watch it, listen to it, and think about the things they are doing in practice and research, and how the findings can help them to improve. It’s a great honour to have been chosen for the entirety of the body of work, with contributions to research as well as clinical practice leading to practice change; it is about contributing to our overall body of knowledge to improve outcomes for our patients, something we must continue to strive to do each day we go to work,” he said.