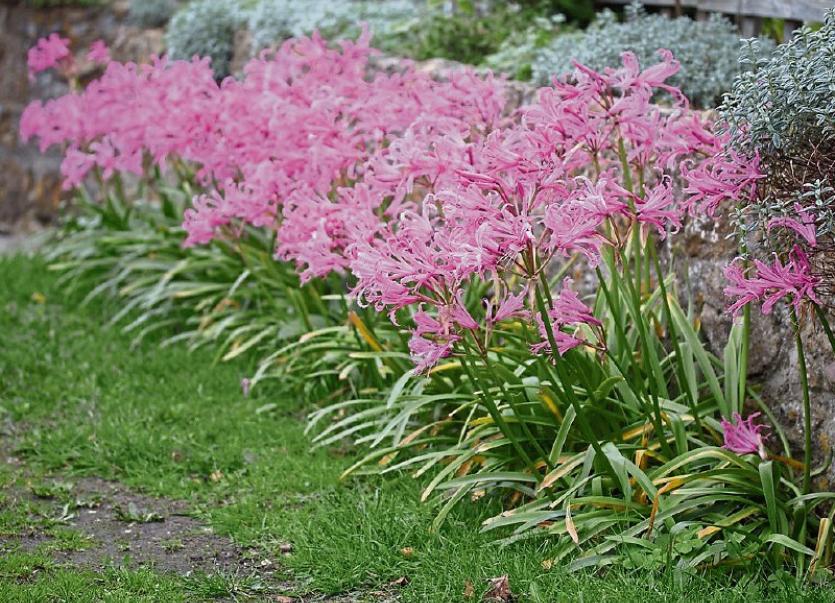 Nerines can be a colourful addition to any border or bed

LATE flowering bulbs continue to provide colour in the garden at this time of the year, when deciduous trees and shrubs are losing their leaves and most herbaceous plants are past their flowering period.

Nerines should be planted at the foot of a south-facing wall where they can bake in the sun. If you have heavy clay soil grow your nerines in pots or containers using a soil-based compost with some grit added to improve drainage. Plant three or four bulbs in a seven inch pot, with the shoulders of the bulbs just under the compost and the necks just above the soil.

Cover the top of the compost with a layer of grit so that water does not sit next to the bulbs causing them to rot. The bulbs soon settle in and begin to multiply. Do not be too quick to divide and repot the clump as they like to be overcrowded. Leave the pots in a sunny spot on the patio and when the first frost is forecasted, bring them indoors. After the leaves die down in early summer, keep them dry. When the first signs of emerging flowers appear in the autumn give them a thorough watering. Give your nerines a boost by feeding them with a high potash fertiliser such as tomato food. Do not use too much because the bulbs will produce a huge crop of leaves and very little flowers. Plant nerine bulbs in the autumn.

The kaffir lily likes a moist well-drained soil. Sow the rhizomes in soil with plenty of well rotted manure added to retain moisture and create the right conditions to allow the rhizomes to spread. If the plant is protected from frost with a mulch it can remain in the same location for several years. Plant in the autumn.

Move containers of shrubs or winter bedding to a sheltered spot when conditions turn very cold.

Lift and store dahlia tubers once the leaves are blackened by frost.

Rake autumn leaves from lawns and pick them out of borders for composting. Place bark mulch over the crowns of hardy fuchsias to provide protection from frost.

Plant deciduous trees and shrubs during this dormant period, when soil conditions are suitable. Plant trees and shrubs that have colourful barks or berries which look very well at this time of the year.

Remove fallen leaves from the garden pool, these leaves will reduce oxygen levels in the pool as the leaves decay and starve fish of oxygen. Place water pumps at the bottom of the pool to protect against frost.

In the vegetable garden continue to harvest parsnips, Brussels sprouts and leeks as you need them. Tidy up the garden, remove weeds and dig it so that frost can break down any lumps of clay present.