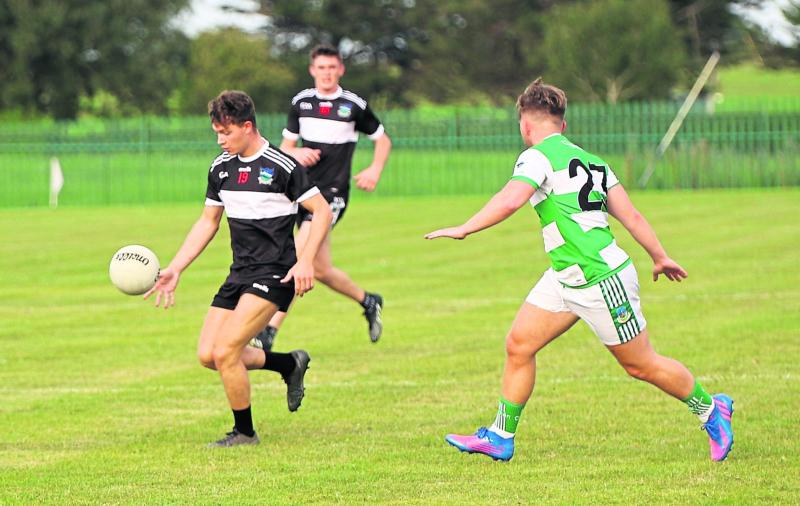 Newcastle West, already qualified for the knock-out stages of the championship, defeated Claughaun 1-16 to 0-6 at Mick Neville Park in their Round 4 clash.

The winners led 0-6 to 0-2 at half-time. Two Eoin Hurley frees opened the second half scoring and, when Newcastle picked it up again, Shane Stack and Todd Donovan followed up before Craig Kelly smothered Corbett's shot on goal.

After Hurley and Stack stretched the lead to ten, the Magpies' intensity cooled off, Claughan pressed forward and, despite the life being sucked from their attacks by blanket marking, Cian Byrnes turned off his spectacular high catch on the edge of the square but his rasper skimmed just over the crossbar.

A break from deep led to Claughaun keeper Ronan Power bringing off another top-drawer save, this time from Seán Murphy, before Byrnes edged the Hoops closer off a free.

However, that was met by sub Brian Hurley pointing with his first touch of the ball. Alex Kiely replied with a pair of frees before before Newcastle worked themselves up for a final flourish as Mike McMahon followed up his point from a mark by crashing to the net off a Corbett/Brian Hurley move before Emmett Rigter and Thomas Quilligan's free closed the scoring.

Claughaun set their sights now on a crucial round five meeting with neighbours Monaleen which will determine the final make-up for the quarter-finals.

Meanwhile, Kildimo-Pallaskenry finished strongly to claim a share of the spoils with Galtee Gaels at Caherconlish.

Galtee looked on course to claim a crucial win when leading by 1-13 to 0-11 after 48 minutes of an entertaining contest.

Galtee led 0-8 to 0-6 at half-time, with Zach McCarthy catching the eye in attack, scoring three smashing points from play.

Kildimo-Pallaskenry hit the woodwork on no fewer than three occasions during the opening half as they prized open their opponents defence in the hunt for goals.

The opening goal of the contest arrived just two minutes into the second half when Sean Casey finished to the net for Galtee Gaels after coming with the impressive Conor McGrath. Galtee's lead was now five points, 1-8 to 0-6.

A fourth point from Zach McCarthy had Galtee six points to the good after 36 minutes, 1-10 to 0-7.

However, Kildimo-Pallaskenry clawed their way back into contention, thanks to scores from Peter Nash, a Cathal Downes '45 and Darragh Deegan.

The crucial score of the half arrived in the 49th minute when Peter Nash goaled to leave just two points between the sides, 1-13 to 1-11.

While Galtee Gaels managed just one further point, courtesy of Robert Chields, Kildimo-Pallaskenry replied with three, all from Nash frees, including the equalising score in the first minute of stoppage time.

The result brings both sides onto three points ahead of their final group fixture.