Doodling pays off for Limerick student 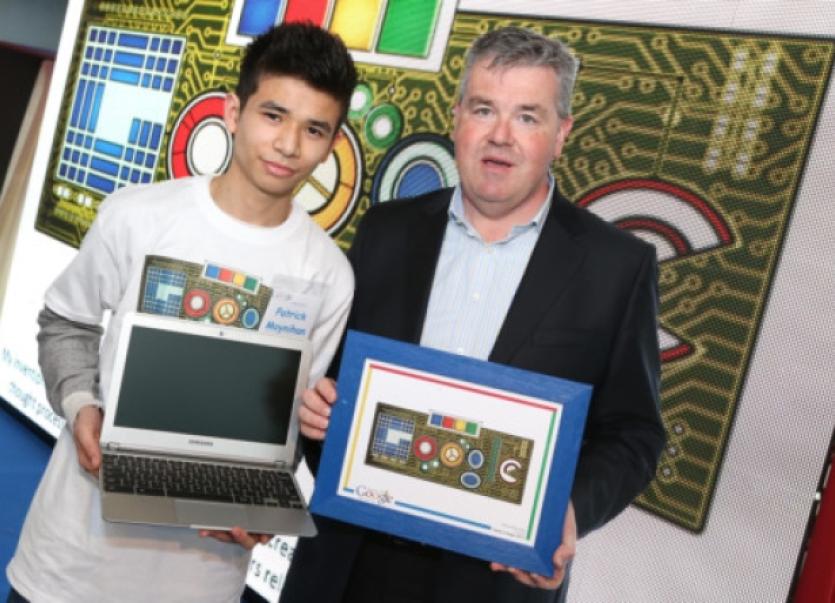 Patrick Moynihan beat out the other finalists and won the most public votes of any entry in his age category.

Google doodler Kevin Laughlin, who is part of the official doodle team based in Google Headquarters in Mountain View California, presented Patrick with his award at a special ceremony in Dublin.

Patrick and his fellow group winners and their teachers will receive a personal laptop each.

The theme of this year’s competition was, My Invention and Patrick’s doodle was called the complexity of simplicity and he described his doodle as: “My invention is the lit up boxes with Google’s colour scheme, created by the circuit.

This represents all the thought processes gone into making these simple colours relatable and recognisable with Google.”

John Herlihy, head of Google in Ireland said: “Creativity is the driving force of everything we do at Google which is why I enjoy the Doodle 4 Google competition so much. This year’s theme, My Invention really highlighted the potential that Irish children have to drive innovation in Ireland in the coming years.”

All of the Doodle 4 Google finalists were invited to Google for a special event and prize-giving to celebrate their achievements. They also had the opportunity to take part in a doodle workshop with professional doodler Kevin Laughlin.

An expert panel of judges including rugby player Rob Kearney chose the 75 finalists, who went forward to the online public vote in February.

Almost 100,000 votes were registered by the public.