An open invitation to take up the Dromtrasna Challenge 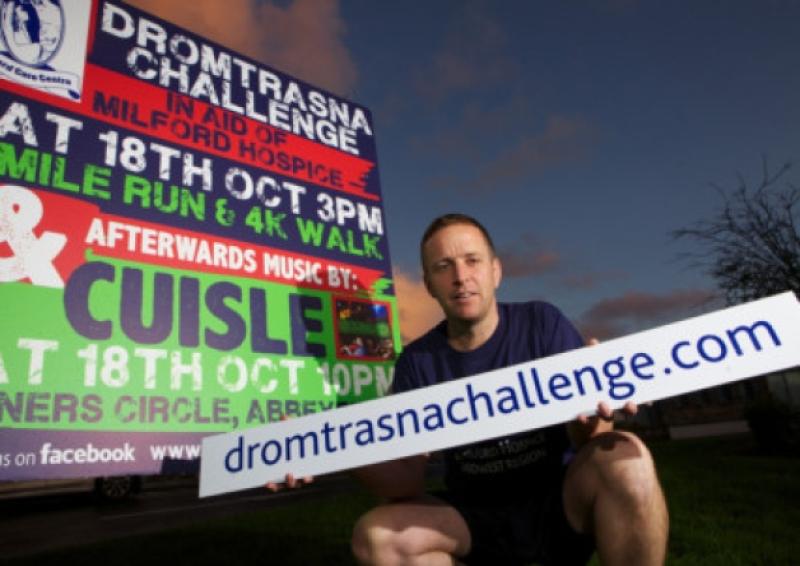 NEW York Marathon hopeful Kieran Flannery is hoping to convince several hundred men, women and children to join him in the Dromtrasna Challenge this Saturday when all funds raised in this 5-mile run and 4km walk will go towards Milford Hospice.

NEW York Marathon hopeful Kieran Flannery is hoping to convince several hundred men, women and children to join him in the Dromtrasna Challenge this Saturday when all funds raised in this 5-mile run and 4km walk will go towards Milford Hospice.

“It was an ideal opportunity to fund-raise,” Kieran, a teacher at Castletroy College, told the Limerick Leader this week.

A marathon man three times over, Kieran won his place, via a lottery, in this year’s New York Marathon and planned to make good use of it by fundraising for Milford.

But he then thought he would like to give value back to his sponsors and he decided to organise this Saturday’s double event near his own home at Dromtrasna, Abbeyfeale. He also hopes it will reach a wider audience than simply looking for sponsors himself.

The two selected routes are both loop trails, starting and ending at Dromtrasna NS, which is located about two miles from Abbeyfeale town.

Just look out for the signposts, Kieran says or simply head for the Garda station in Abbeyfeale and travel the road alongside it for about two miles.

There is no advance registration for the challenge so, Kieran says with a laugh, he doesn’t know how many to expect.

But already, a lot of his running buddies have committed to coming along as have many of his teaching colleagues. And up to 40 Transition Year pupils from Coláiste Ide agus Iosef in Abbeyfeale have pledged themselves to the event.

To add to the friendliness of the occasion, Kieran and a small group of fellow organisers will provide hot drinks and hot food for everyone at the end. And on Saturday night, in the Cellar Bar, Abbeyfeale, Limerick band Cuisle will play for the crowds.

“There is no admission but there will be donation buckets at the door,” says Kieran.

Milford Hospice is his chosen charity, ever since the school took it up a number of years ago, following the death of a teaching colleague who died in Milford. And already, an activity day at the school last Friday has started the funds rolling in.

Those answering Saturday’s challenge will do their bit by stumping up the admission fee of €10 per adult, €5 per child or €25 for a family entry. All participants will be entered for a big raffle on Saturday night.

“There is no on-line registration,” Kieran explains. Just turn up to register at 2 pm this Saturday and the walk and run get underway at 3pm.

If you can’t make it or are unable to walk or run but would still like to contribute, you can go to www.dromtrasnachallenge.com where there is a link to the online charity payment, mycharity.ie

Meanwhile, Kieran is well on track to run the New York Marathon on November 2. “I have the training done,” he says with confidence.