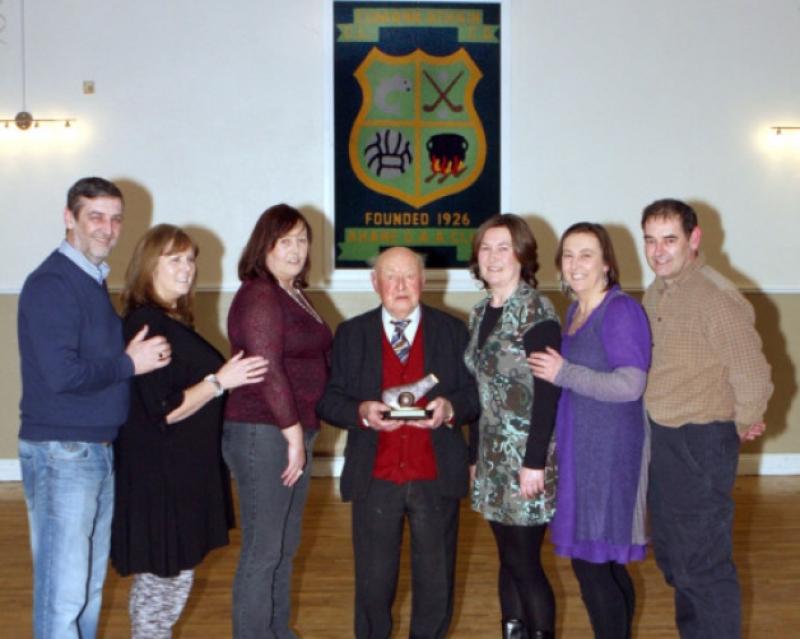 THERE are many legends associated with Ahane GAA club and one of them is Gerry Piggott.

THERE are many legends associated with Ahane GAA club and one of them is Gerry Piggott.

When you consider the club’s roll of honour it is hard to think of greater praise. The club joined together to celebrate the 90th birthday of their greatest ever supporter in the clubhouse.

A special cake with the Ahane crest was baked and senior hurling captain, Daniel Morrissey presented an ornamental bas and sliothar.

Gerry and his dog are a familiar sight at all Ahane and Limerick hurling matches. The proud president of the GAA club even called his Jack Russell “Ahane Og” - often seen sporting the club’s famous colours at matches by his master’s side.

Born in 1924, Gerry is as young a 90 year-old as you could meet. Born in Farranshone, he continues to live there to this day.

Mary Hassett, secretary of Ahane Bord na nOg, says that whilst Treaty Sarsfields were the GAA club in that area, Gerry is a lifelong supporter of Ahane since he was four years of age.

Gerry recalls being none too popular with the Treaty men when shouting for Ahane against Treaty! His aunt, Mrs Curran, lived in Fountain House, which was the old police barracks, at the junction of the Dublin and Newport road.

As soon as Gerry could cycle a bike, he would cycle out to his aunt’s house every Friday after school and remain there until Sunday evening. He has fond memories of going to Reilly’s field where Ahane trained and played and then into Reilly’s shop for currant buns and lemonade.

“He had many friends in the great Ahane team that won seven senior county titles in a row from 1933 to 1939. Gerry has a wealth of memories from that era and a wonderful sense of recall,” said Mary.

One of the famous stories he tells is about travelling to support the Limerick hurlers.

He remembers cycling to Thurles on Saturday evening for a game the following day when the front wheel of his bike seized and he carried the bike some 20 miles to Thurles.

It cost him ten shillings to have the bike repaired for the journey home. Accommodation would be sourced wherever and on one occasion he slept on a kitchen table in Dundrum!

Gerry worked as an upholsterer in Cannock’s for 33 years and to this day is as a master of the trade at his home in Farranshone. Mary says his home is a shrine to Ahane and Limerick hurling.

“His passion for Ahane hurling is never ending and he is one of the most loved and popular people in the club,” said Mary. This was demonstrated by the large turnout of extended family and friends at his 90th birthday.

See page 10 of Leader 2 for another photo