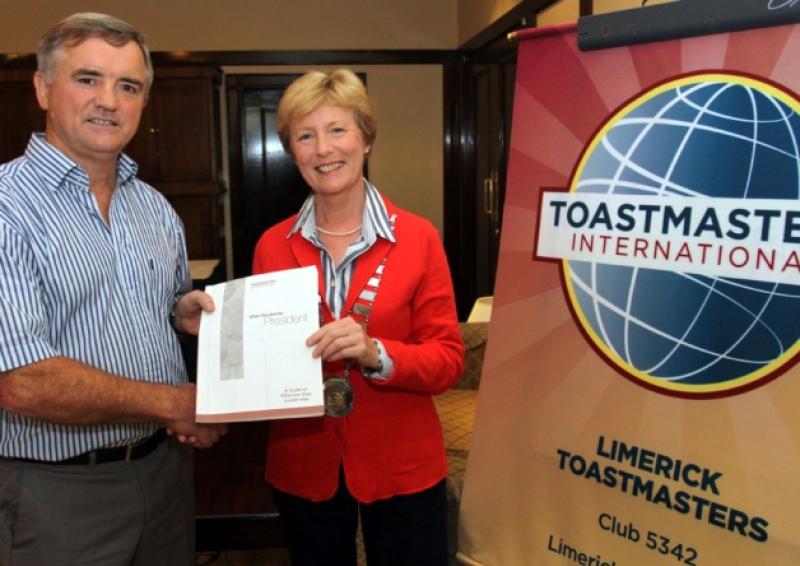 “It is the number one fear. People actually say they would rather be dead than have to speak in public,” said Mrs Gleeson.

She says the whole idea of Toastmasters is to help one and all to get over this paralysing fear.

Everyone has seen someone nervously give a speech and through no fault of their own it can be toe-curling embarrassing for the speaker and the audience.

Public speaking is not easy, especially when you are not used to it, and that is where Toastmasters comes in.

“Limerick Toastmasters focus is on helping all members build self-confidence by learning and practicing the public speaking skills required to effectively express themselves.

“It is for anybody who wants to improve their communication and leadership skills. That is what it is all about,” said Mrs Gleeson, who has taken on the role of president this year from Eamonn Finn.

It is an important year for Limerick Toastmasters as it is their 30th anniversary. All age groups are welcome and attend meetings.

“We have a lot of college students who may have to give a presentation as part of their studies; somebody might have to give a talk at work to their colleagues; a best man who has to deliver a speech; it might be preparing for an interview.

“There are many, many instances where the ability to be able to stand up and speak in front of a crowd is priceless.

It covers all of that through a carefully designed programme” said Mrs Gleeson, who many will know from her involvement with showjumping in Limerick Show.

Limerick Toastmasters are holding an open night on Monday, September 9 at 7.45pm on the second floor of the Savoy Hotel.

It is their first night after the summer recess and Mrs Gleeson said it is an introduction night for new members.

“Everyone is welcome. There is no pressure and anybody that comes on Monday night you will not have to speak!

“People might be afraid that they will have to speak but they don’t.

“There will be demonstrations so they can sit, listen and see what we are all about. They don’t have to open their mouth!” said Mrs Gleeson. Meetings are held on the second and fourth Monday and the Clarina woman says it is a warm, relaxed and friendly environment.

“Everyone is welcome from all over the city and county. We even have people from Clare. We are all in the same boat,” she says.

For more information log on to www.limericktoastmasters.com or go along to the Savoy Hotel on Henry Street on Monday, September 9.