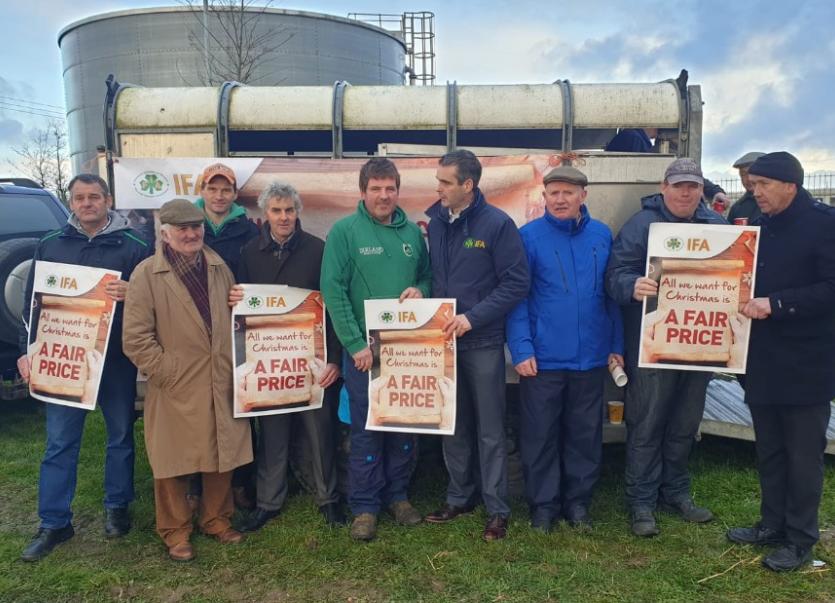 MEMBERS of the Irish Farmers Association have begun a blockade at the Lidl distribution centre near Charleville as the row over beef prices continues.

The blockade, which Limerick IFA members, began at 7am and will continue for 12 hours. The move follows a similar blockade on Thursday at the Aldi distribution centre in Naas, County Kildare.

It is a stepping of its campaign for an increase in the price of beef.

"Retailers have a powerful grip on the food chain and cannot shirk their responsibility to farmers. There is too much buck-passing between processors and retailers in their rush to grab all the profits, leaving farmers in a loss-making situation," he said.

As far back as last August, he said IFA warned Minister for Agriculture Michael Creed that the retailers had to be present at the talks "but it never happened".

"This was a serious error by the Minister as it gave the retailers a free pass. Irish prices are 20c/kg or €80 per animal behind the Bord Bia price tracker, and 50c/kg or €180 behind the UK price. Prices here have been well behind the EU and UK beef price for weeks.

"Farmers are justified in seeking an immediate and meaningful increase in the price of beef. We have had enough excuses from both processors and retailers. Our message to the retailers is clear: tell your beef processors to give their farmers a price increase.

"We will continue to take action until processors give a significant price increase," said Mr Healy.

One of those at the protest is IFA presidential candidate John Coughlan.

"All the parties to the talks, including the meat industry, are saying they want a deal. If so, why are we not all in a room right now looking to agree one? The lack of urgency is staggering. Farmers do not need a stop-start talking shop, they need action. The only people who benefit from delays are meat barons who are pocketing the additional margin which independent analysis shows is in the market,” said Mr Coughlan.

"We have 20 days to save €20 million. Every day that passes without progress, farm family livelihoods worsen. We need a new dynamic, because where we are is clearly not working," he added.

Meat Industry Ireland has described the blockades as unjustified and irresponsible.