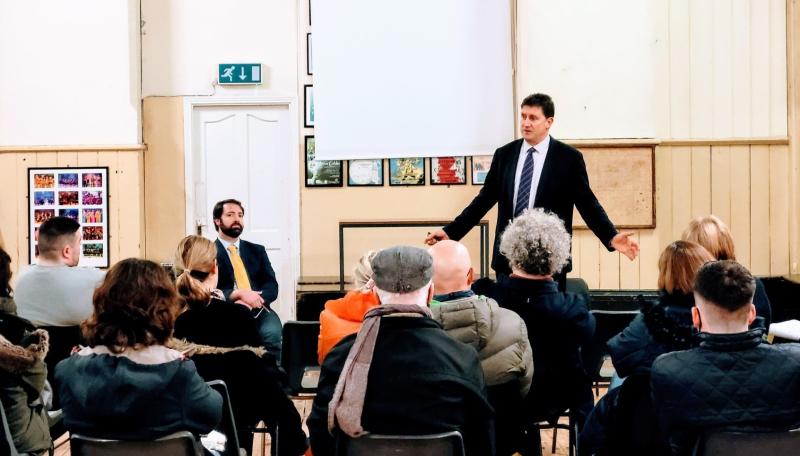 MINISTER Eamon Ryan has delivered a special address to Limerick councillors outlining his plans and ambitions for the future development of the county.

Speaking at County Hall in Dooradoyle, the Minister for Transport, Climate, Environment and Communications revealed his intention to develop strategic “acceleration teams” to work collectively and to deliver projects across three key areas.

These are: sustainable mobility, housing infrastructure and the development of economic opportunity within Limerick city and county.

“The council plays a key role in our climate plan,” the Green Party leader said, adding that a better balance is needed in the west and that Limerick’s 140k population is “simply not enough.”

The Minister stressed that while 95% of flights and shipments come through the capital as well as 74% of all new national housing stock being built there, Limerick must explore its potential over the next three years.

His goal, with the new acceleration teams, is that councils - such as Limerick City and County Council - will be better tasked to deliver on the Government's Climate Action Plan and can act as dedicated teams along with relevant agencies.

During yesterday's meeting, which lasted for more than 90 minutes, Mr Ryan touched on several key Limerick-based transport projects and he emphasised the need to put railway stations in Adare and Moyross before the 2027 Ryder Cup becomes an “international showcase.”

The Minister also suggested the development of an “iconic” Limerick project, that would see the roll out of a bus connection between University of Limerick, Mary Immaculate College and TUS.

Describing Limerick city as “flat and not so big”, Minister Ryan urged councillors to look at developing the centre through the reallocating of space, as opposed to continuous outward development into County Clare.

In terms of energy, the Minister suggested opening up the potential of Foynes Port, in addition to a “transformative” offshore wind project across the Shannon Estuary that would attract significant investment.

“Limerick is a real success in terms of industry, with 57 companies looking to invest due to our wind potential,” he added.

Towards the end of the meeting, when asked about the Northern Distributor Road by Cllr Conor Sheehan, the Minister said that it is not included in the €35bn in transport projects across the revised National Development Plan.

“Transport Infrastructure Ireland are advising against it. There are endless other projects that I am under pressure to deliver. The odds of the project getting money, is infinitesimally small next to nil,” he stated.