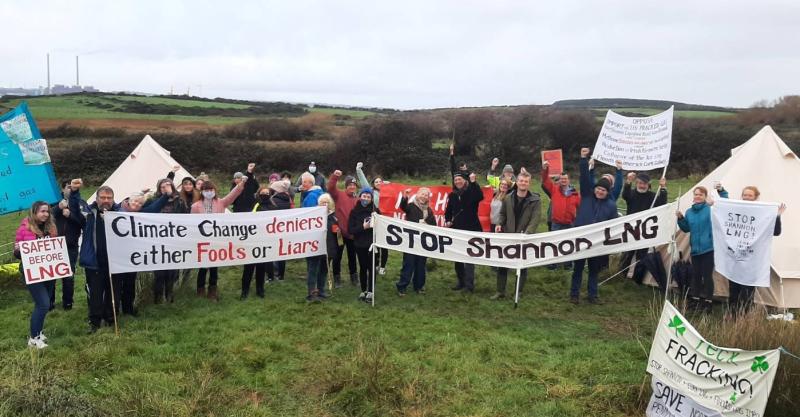 Around 50 people took part in the protest

OVER 50 people occupied the site of the proposed Shannon LNG plant between Tarbert and Ballylongford at the weekend in protest against a project which they said would “lock Ireland into climate-wrecking fossil fuels for decades.”

The protest came on foot of the new planning application to An Bord Pleanála by Shannon LNG, a subsidiary of US-based New Fortress Energy, for a floating gasification terminal on the Shannon Estuary, and a 600MW power plant.

An Bord Pleanála is expected to decide on the proposal by March next year.

Great to see so many groups travel from around the country to show solidarity with the local campaigners fighting against #ShannonLNG. Great also to hear Tony Lowes from @FIEIRELAND speak at the site too, as without them Shannon LNG wouldn't have needed to reapply for planning. pic.twitter.com/hcdGmbNBsL

Also in attendance was Tony Lowes from Friends of the Irish Environment who succeeded in their High Court case to quash an extension to the original planning permission.

Aine Treanor of Slí Eile said in a statement released after the protest: "This action has been an important chance for groups around the country to show their opposition to the Shannon LNG fracked gas import terminal.  It is a great show of solidarity with the very committed local campaigners, along with the affected communities in the US, which have been ravaged by the effects that fracked gas extraction has brought to their communities."

Shannon LNG has said it will not use fracked gas at the proposed new terminal and will, over time, move towards hydrogen.

However, this has been challenged by Séamus Diskin of Slí Eile who said:  “All of New Fortress Energy’s upstream operations involve fracked gas. Nowhere in Shannon LNG’s planning application does it commit to not using fracked gas, and it states, ‘It is neither necessary nor appropriate to include particulars of any one place where source gas might be extracted.’"