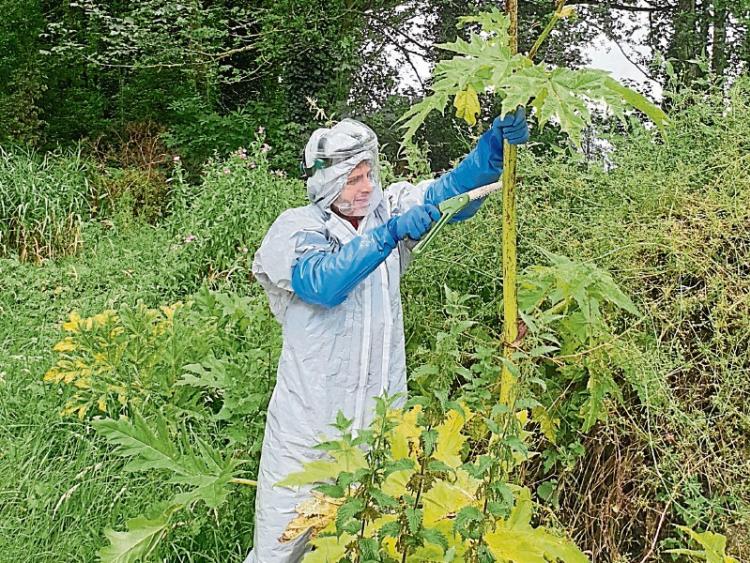 AN ALIEN species has landed in County Limerick that burns the skin and can leave scars.

Japanese knotweed has received lots of publicity but giant hogweed is another invasive plant that has taken root in County Limerick. It particularly likes riverbanks and has taken a shine to the Loobagh with a particular proliferation found south east of Kilmallock.

Anne Goggin, senior executive engineer in the council’s environment section, has led the way in tackling it head on. The council with the support of the Department of Culture, Heritage Council, Ballyhoura and Maigue Rivers Trust have commenced a three year plan to eradicate it.

Dr Frances Giaquinto gave councillors in the Cappamore-Kilmallock district an enlightening presentation on what they have achieved so far and what the future holds. She said giant hogweed can grow up to five metres tall and has huge leaves.

“The problem with giant hogweed is that it burns the skin on contact with long term effects. It spreads rapidly by seed dispersal and can turn up anywhere. It takes over and destroys native biodiversity. It ruins cultural and leisure activities along rivers. It contaminates fodder leading to widespread dispersal,” said Dr Giaquinto.

The botanist, applied ecologist and invasive non-native plant species specialist said they will be using minimum herbicide in their project.

“It is counterproductive to the council’s aim of restoring biodiversity. Herbicide lays soil bare, making it vulnerable to erosion, unwelcome weedy species, and 20 invaders like Japanese knotweed, giant butterbur and Indian balsam. Manual methods may be harder physical work but they may not be slower in the long run,” she said.

Dr Giaquinto and her team started in the summer and to date have cut off giant hogweed flowering heads along the Loobagh corridor and tributaries to stop its spread.

Next February they will physically dig out giant hogweed roots with spades, in August cut flowering heads again and in September control secondary invaders.

Dr Giaquinto is full of praise for south Limerick farmers. “We have got fantastic support from landowners, volunteers and local residents,” she said.

At the end of the presentation, Dr Giaquinto stressed again the dangers of coming into contact with giant hogweed. She spoke of a person getting “quite badly burnt” while they were foraging for blackberries.