As It Stands: The results of the Limerick election tallies 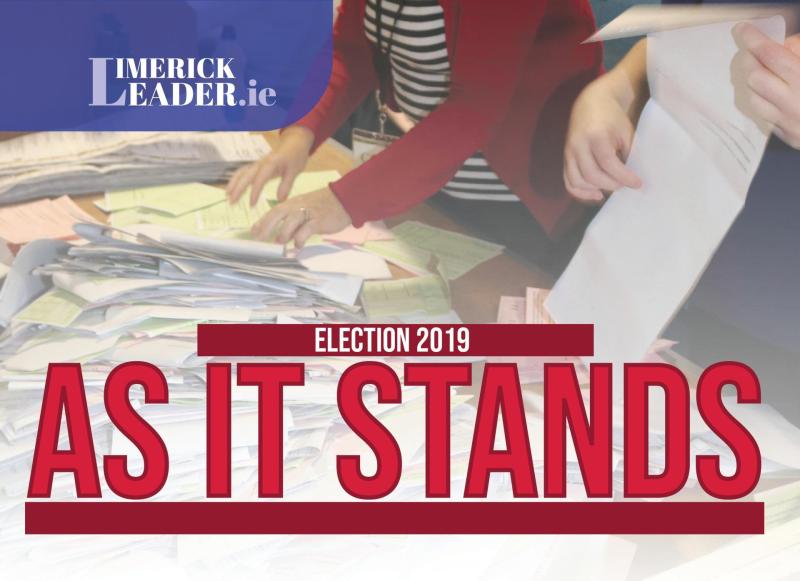 AFTER A long day at the Limerick Racecourse, the tallies in all six districts across the city and county have been completed, indicating an exciting day of results this Sunday.

Here is a rundown of all the different areas by all our reporters, who spent hours analysing tallies, minute-by-minute, and speaking with the various candidates at the count centre.

This Sunday morning, follow our live blog for the official results when candidates will discover their fate, whether they will be elected or eliminated. All day, for as long as it takes, we will be here to bring you all the updates.

The final tally from Limerick City East suggests there could be a shakeup on the way for the district, with two first time candidates neck and neck to top the poll.

With 97.9% of votes cast in the district tallied on Saturday, it looks like the quota for the Limerick City East will roughly be set at around 1,300 votes.

Just one box out of 48 was not tallied on Saturday; A tally was not taken of a box from Ballinacurra.

Fianna Fáil’s Catherine Slattery, from the Old Cork Road, and Fine Gael’s Michael Murphy, from Castleconnell, are currently tipped to top the poll in Limerick City East on 10.6% of the overall vote.

According to tallies taken at the Limerick Racecourse by Fine Gael, just six votes separate the two candidates, with Ms Slattery just ahead of Mr Murphy.

Labour’s Elena Secas, currently a sitting councillor, is close behind on 10.5% and first time candidate Sean Hartigan of the Green Party is predicted to take 9.6% of the vote.

With margins predicted to be so tight in City East, transfers will be incredibly important for candidates on Sunday.

Aontú’s Michael Ryan is currently on 6.5% compared to Fine Gael’s Marian Hurley is on 6.3%, and Sinn Fein’s Seighin Ó Ceallaigh and Sarah Jane Hennelly are neck and neck on 4.7%.

Based on this Saturday’s predictions, Paul Keller of Solidarity- People Before Profit and three Independents, Noel Hannon, Derek Mulcahy and Diarmuid Ryan are not set to win seats.

With tallies showing that three first time candidates polled favourably in City East, and with seven sitting councillors re-entering the race, it looks like the district will be set for a shakeup this Sunday.

IN City North, former Labour councillor Frankie Daly has hoovered up the vote, according to tallies.

He's on course to top the poll with hundreds of votes to spare, with indications he has pulled in 1,851 votes.

All eyes will be on where his transfers will go, with competition elsewhere in the ward set to be stiff, especially in the lower order.

The Green Party's Brian Leddin is currently placed second, according to tallies, and looks odds on for a seat now, while veteran Fianna Fail councillor Kieran O'Hanlon looks set to take the third seat.

Brian O'Connor has 315 votes, Eleanor McSherry is ahead with 448 votes, and could take a later seat, while former deputy mayor Denis McCarthy has polled just 255, tallies indicate.

Sinn Fein are waiting to see if its multi-candidate strategy north of the Shannon will pay off.

At present, its sitting councillor John Costelloe has 749 first preference votes, according to estimates.
If elected, it remains to be seen if his transfer goes to running mate Sharon Benson.

There was disappointment for Solidarity's outgoing councillor Mary Cahillane, who was co-opted in place of Cian Prendiville, who stepped down in October. She has conceded defeat after polling just 367 votes.

Meanwhile, in City West, a number of outgoing councillors are in the battle of their lives to hang onto their place in the seven-seater ward.

Fianna Fail councillor Sean Lynch is only marginally ahead of him on 584 votes, and lies in ninth place at present, while Independent John Loftus took just 44 first preference votes, according to tallies.

Fine Gael councillor Elenora Hogan is facing a nervous day tomorrow, as she has tallied at 679 votes, and may be reliant on transfers from party colleagues to see her over the line.

Mayor James Collins is on course to top the poll, with an estimated 1,378 votes.

His rival in City West, Cllr Daniel Butler, Fine Gael, is just behind him with 1,309 votes.

Despite troubles for Labour elsewhere in the city, long-serving councillor Joe Leddin looks set to win his fifth election in a row, and is currently tallying in third position.

A strong showing in Patrickswell sees Independent Fergus Kilcoyne in the fourth seat - with an estimated 744 votes at present.
Early optimism for Fianna Fail's Azad Kalam Talukder appears to have faded. He has tallied just shy of 700 first preference votes, and it remains to be seen if he will have enough transfers to see him home.

It looks like there will be a battle royale for the final two seats in City West - Cllrs Hogan, Lynch and Fine Gael's Daniel McSweeney all in the mix, along with the Social Democrats candidate Elisa O'Donovan.

Given his party's strong showing in this local election, Green candidate Brendan MacGabhann also remains very much in contention.

Local elections have a way of making fools of the best observers but the consensus is that Fine Gael will win a seat at Sinn Fein's expense in the seven seat Cappamore-Kilmallock municipal area.

Independent Cllr Brigid Teefy is the front runner with 2,410 or 15.9%, according to the tallies.

"I'm absolutely delighted," said Cllr Teefy, who admitted she was worried in the run-up.

Cappamore's Mr Ryan said it was "unbelievable" to poll so well on his first election outing. In two boxes in his home village he received 74% of the number ones.

Sinn Fein's Jim Hickey is a strong candidate but the party's first preferences fell from 12.79% in 2014 with Lisa Marie Sheehy to 5,4%.

Seasoned observers are calling it as follows: Brigid Teefy, Martin Ryan, Eddie Ryan, Gerald Mitchell, John Egan, Mike Donegan, and Greg Conway will be the new councillors for Cappamore-Kilmallock. But nothing is set in stone.

Fine Gael had a good election in Adare-Rathkeale where two of its councillors Adam Teskey and Stephen Keary are set to top the poll.

Cllr Teskey, who was only co-opted to the council in 2016, made a particularly strong showing with 2,444 on his tally while Cllr Keary also made a strong showing with 2073. Party activists are optimistic that their surplus could help secure a third seat for Leo Walsh sho is on 878 according to the tally.

Meanwhile, Independent Richard O’Donoghue, who stood as a Fianna Fail candidate in 2014, had a good campaign, boosting his vote from 912 first preferences to a tally vote of 1736 which he puts down to hard work.

The area’s other Independent, Emmett O’Brien, who stormed to victory in 2014, saw his share of the vote tumble, from 2,270 first preference votes to a tally vote of 1,552, still more than strong enough to retain his seat.

It looks set to be a good election for Fianna Fail in Adare-Rathkeale where they went into the election with just one sitting candidate. Cllr Kevin Sheahan will hold his seat on 1,241 while a second seat is possible, most likely for new candidate Bridie Collins of Adare who is polling at 986, ahead of her fellow candidate Trina O’Dea on 756.

Both candidates are expected to attract cross-party transfers. But the quota is high at 1,895  and transfers will decide whether Fine Gael or Fianna Fail takes the sixth seat.

New candidate Theresa Storey for the Green Party has produced a very credible first campaign at 535. Direct Democracy Ireland candidates Mark Keogh and John Putt came late into the campaign and failed to resonate with the electorate.

Fine Gael had its best performance  ever in Newcastle West where the party looks on course to take four of the six seats in this district, a phenomenal achievement by any standard and likely to be a national talking point. With four candidates in the field, the party’s share of the vote, according to the tally is 57%, a full 10% more than in 2014.

As expected Fine Gael’s Jerome Scanlan topped the tally with 2511 while his party colleague Liam Galvin, based in Abbeyfeale, pulled in 2,117. Glin’s Cllr John Sheahan clocked up 1,483 on the tally while newcomer Tom Ruddle, from the Newcastle West town area, pulled off an excellent first outing with 1,189 votes.

With Fianna Fail standing only two candidates, the odds were always that they would retain their two seats. Michael Collins looks set to see his vote increase, from 1,682 in 2014 to 2,172 this time out. Francis Foley’s vote remained steady at 1,162.

But for Sinn Fein, who won their first seat in Newcastle West in 2014, it was a disappointing turn out. Seamus Browne won 1,271 first preference votes in 2014 but his tally at closing this Saturday was down to 857.

He is not expected to hold the seat, adding to a very disappointing overall performance for the party in Limerick.

Independent candidate Christy Kelly saw his vote fall to 481 while Aontú’s Conor O’Donoghue was on 250 and Renua’s John Dalton was on 209. Sean O’Mahony got 23 votes on the tally.