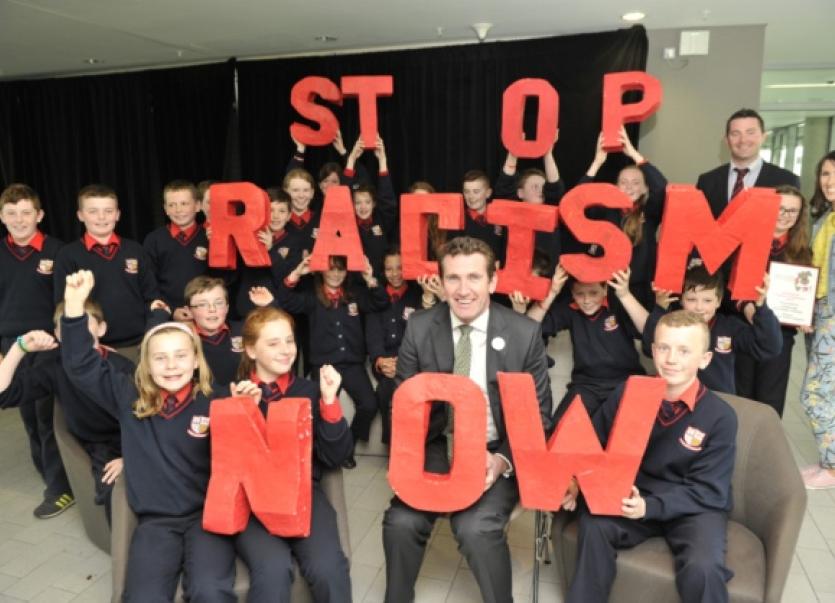 CAHERLINE NS is this year’s national winner in the primary schools category of Show Racism the Red Card’s creative competition.

CAHERLINE NS is this year’s national winner in the primary schools category of Show Racism the Red Card’s creative competition.

The winning art work has three elements: a photograph of each student in the class bearing the slogan Show Racism the Red Card, a painting by each student of people of various ethnicities and from different countries and, finally, a collage depicting a person with various skin tones. Caherline NS also produced an excellent video to promote respect.

Although the standard of entries was described as “terrific” by Minister Aodhan Ó Ríordáin, it is clear why this school – a first-time entry – won first prize. It gives a clear message of acceptance and equality, and echoes Red Card’s anti-racism views.

Creating their entry seems to have taught the students a lot.

“We learned that we’re all different, but we should respect people and who they are,” said Caherline pupil Zuzanna Gruszecka. “We shouldn’t judge people just because they’re different.”

Finalists of the competition gathered in the Aviva Stadium on Monday, April 20. It attracted 235 entries from around the 26 counties.

The organisation’s main aim is to spread an anti-racism message using the power of sport and sports people, and has worked with hundreds of schools and youth organisations to help young people better understand racism and how to deal with it. So how important are competitions and organisations such as these?

Caherline student Caitlyn Walsh thinks they “bring a lot of awareness” to the issue of racism, which remains prevalent. A recent survey showed an estimated 44% of soccer players had witnessed racism at some point in their careers.

When creating their piece, Caherline NS teacher Bridget Lambert said pupils “learnt about racism and how to cope with it in their own environment”. The children worked together as a class, with several students putting forward their ideas. Looking at the various forms of art displayed in the students’ exhibition, their joint effort and enthusiasm for the project is clear from a single glance at their work. Winning a national competition such as Show Racism the Red Card is a wonderful achievement for Caherline NS, said Michael McCarthy, principal.

“It is an award we are extremely proud of, given the plight that racism is not only in schools but also in society. We are proud that our video will help promote respect for all beliefs and all backgrounds. The award was the fruit of much hard work and planning by the pupils and staff. The video sends out a strong message that there is only one race - the human race. The project was co-ordinated and planned by Miss Lambert. She worked hard with the pupils and other staff members to create the award winning video. In all 88 pupils helped to make it. Well done to all,” said Mr McCarthy.

“Personally it was most pleasing to see the children realise that they can actually make a difference in promoting the equality and fairness by means of their video, which was a creative mix of art, song and performance. Education is the way forward in this respect - after all we are not born racist - it is something that is learned, as much as being born not knowing a poem or long division sum! The video can be seen by typing Caherline NS racism into YouTube,” he added.