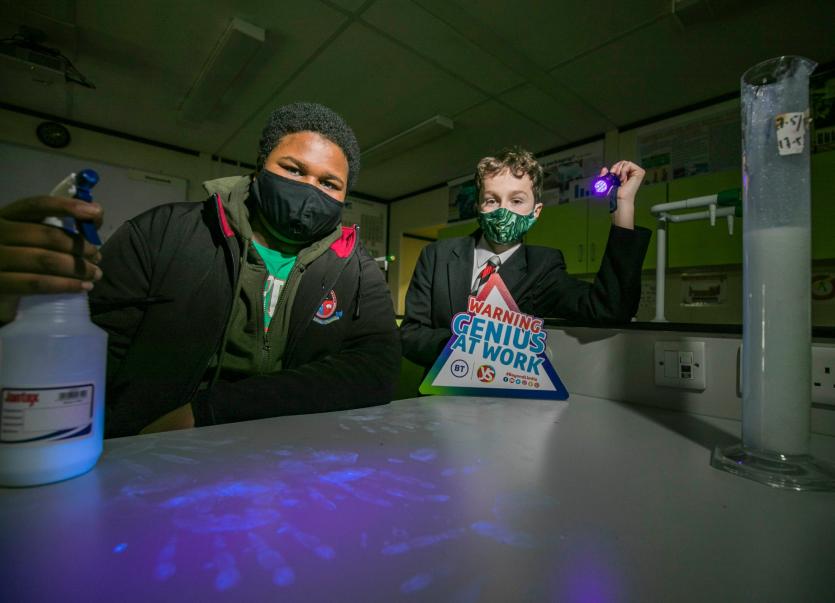 A total of 16 awards were presented to students from Limerick schools for their impressive projects entered in this year’s exhibition which concluded yesterday afternoon.

One of the Limerick award winners was Keelin Murphy from Laurel Hill Secondary School FCJ who was awarded the Fr Tom Burke Bursary Award after she was deemed, by the judges, to be the best communicator.

Keelin's project, in the Social and Behavioural Sciences category was entitled "The disproportionate nature of the gender gap in politics".

A huge congratulations to Keelin Murphy whose project “The Disproportionate Nature of the Gender Gap in Politics”won the Fr. Tom Burke Bursary award for best communicator! This is an amazing achievement! Well done Keelin! @BTYSTE @Limerick_Leader @Ml_Cregan pic.twitter.com/S5atWAp8kB

In addition to being awarded first prize in the technology category, Sarah Moloney of Gaelcholáiste Luimnigh won a special award, sponsored by Comreg, for her project 'Automated Pill Dispenser – increasing independence, efficiency and reducing dosage errors'.

Another special award, sponsored by Science for Development, was presented to Aronnya Khan Zakaria of Castletroy College  for her project which was entitled 'the development of racial prejudice in children: a statistical analysis on the influence of society and home life on a child’s thoughts and attitudes towards racism'.

This year's winning project looked at the development of racial prejudice in children. #BeyondLimits pic.twitter.com/v04Yu7MRB7

The overall winner of the competition was 17-year-old Gregory Tarr, aged 17, a 6th year student from Bandon Grammar School in County Cork.

Gregory has taken home the top prize of €7,500 and the BTYSTE perpetual trophy for his project titled “Detecting state-of-the-art deepfakes.” He presented his project in the senior age group of the Technology category.

Gregory impressed the judges with his project using a sophisticated artificial intelligence software program that can efficiently detect DeepFake media with state-of-the-art accuracy.

The software, which is over 150,000 lines of code, made significant improvements on speed and efficiency when compared to the current best model without sacrificing its ability to accurately detect the fake.

This tool could potentially be deployed at scale to filter out DeepFake media making the internet a safer place. This was Gregory’s fifth time competing at BTYSTE having competed on four other occasions in the RDS.

Gregory Tarr, Bandon Grammar School, Co Cork. For his project ‘Detecting state of the art deepfakes’
Stand 4308 on our virtual portal.
Well done, and thank you, everyone for embracing a digital-first exhibition due to Covid-19#BTYSTE #beyondlimits pic.twitter.com/9UgNnV5GFH

Chair of the Technology judging panel, Leonard Hobbs from Trinity College Dublin, said: “The winner this year demonstrated an expertise in computer science which was well beyond his years. The level of coding he deployed in developing the extremely complex program which detects fake videos, was guided by his deep understanding of this leading-edge technology".

Mr Leonard added: “the judges have been continually impressed by Gregory’s projects at the BT Young Scientist & Technology competition over the past few years and they were delighted that he had progressed to winning the top award this year."

Gregory will also represent Ireland at the European Union Contest for Young Scientists, which is scheduled to go ahead in Salamanca, Spain, in September 2021.

Speaking at the awards ceremony, which was streamed live online, Minister for Education Norma Foley congratulated all the students who took part in the Exhibition.

"I am inspired by all of the students’ ambitions to tackle from a scientific and technological view the national and international issues facing us in today’s society, including the global pandemic, climate change, mental health and socio-economic challenges. It is encouraging to witness the level of creativity and innovation of the students as demonstrated through their meticulously researched and ingenious projects. Each student is a credit to themselves, their families, schools, communities, and every one of them should be proud of their accomplishments,” she said.

BT Ireland has announced the public will have free access to the BTYSTE 2021 portal content until the end of January providing extended access to all of the content to audiences in Ireland and internationally.