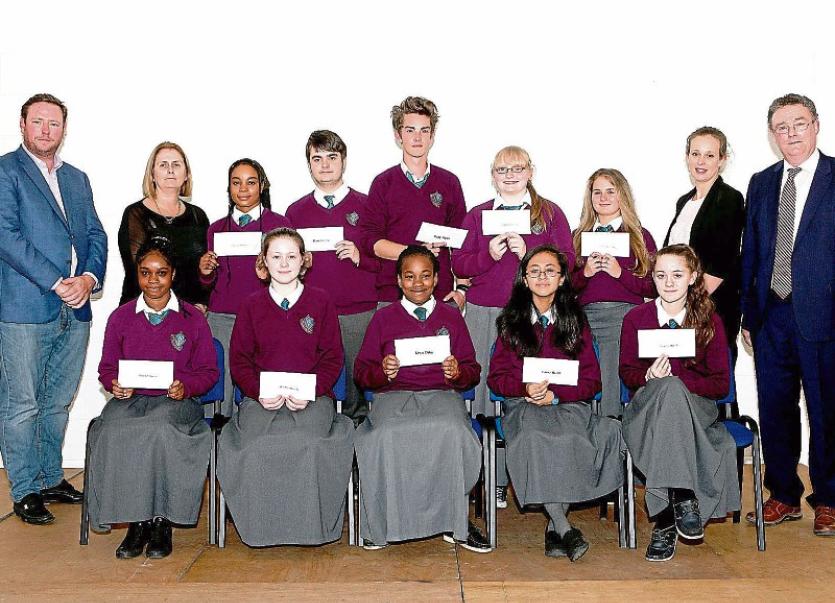 At the ceremony in a crowded PE hall on the Moylish campus, 650 students, staff and guests celebrated the inaugural Greaney Family Scholarships on Monday afternoon.

Mr Greaney, a native of Limerick, is now founder and president of Boston-based real estate investment company Synergy, and was in his hometown to present the new awards.

The school said that the initiative “encourages every student in Thomond Community College to strive to achieve their very best, academically”.

“I think this is unique, and the reason I think that is because I don’t know of any other school in the country that would have something similar. A lot of schools would have scholarships when students are in the 6th year and going onto the third level.

“But what David was interested in doing was trying to encourage students, from a very young age, to aspire to going to third level. He said that he would like to have a scaled ladder of progression as they go through 1st year, into 2nd, 3rd, etcetera, and to try and generate a bit of competition from the academic side. And to give reward to those students for the good work that they have been doing.”

Next year, the scholarship will extend to all years, and will expand its fund by €17,500.

Mr O’Brien said that the scholarship will provide a boost to students leaving secondary school and into third level.

“Also if you’re a parent, you are constantly trying to make provisions for your children so that they can go to college, and when you get something like this, it is really a boost to parents.”

The principal said that 10 students who were honoured on Monday “are very bright and very driven”, who are heavily-involved in extracurricular activities.

He added: “It all comes from the home because they are getting their support there.

“And it also comes from the primary schools as well, as they are instilling that ethos of striving to do well. And it pays off when they come in. We continue that baton in second level.”