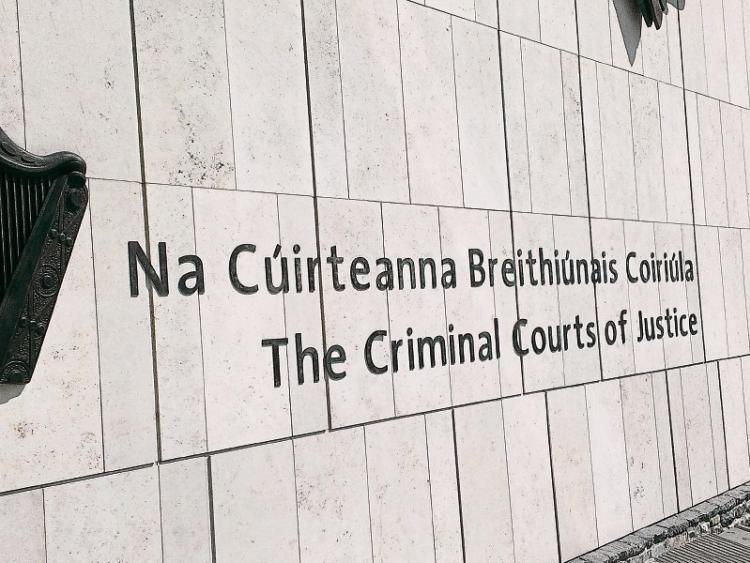 The trial is being heard at the Criminal Courts of Justice

A MURDER accused was in a “life or death situation” and acting in self-defence on the night he stabbed a man who later died, a jury at the Central Criminal Court has been told.

Robbie Walsh, 23, from Island View, Kilrush, County Clare has pleaded not guilty to murdering Karl ‘Gobbo’ Haugh, 25, in the Marian Estate in Kilkee on August 6, 2017.

Patrick Gageby SC, prosecuting, and Brendan Grehan SC, defending, made their closing arguments in the case before Ms Justice Carmel Stewart and a jury this Monday.

The court has previously heard Robbie Walsh and his cousins, Mitchell Walsh and Clinton Walsh, also from Kilrush, went to the Marian Estate on the Saturday night of the August Bank Holiday weekend in 2017 to smash up Mr Haugh’s car.

Its also heard Mitchell Walsh carried a knife, while Robbie Walsh and Clinton Walsh, or all three, carried metal bars.

The decision to vandalise Mr Haugh’s car followed an alleged separate physical altercation between Clinton Walsh and Mr Haugh earlier in the evening - when Clinton Walsh allegedly sought to get cocaine from Mr Haugh.

The jury has also previously seen video footage of Robbie Walsh telling a detective garda that, during an altercation between him and Mr Haugh, Mr Haugh “got a belt” across his shoulder from someone else and this caused Mr Haugh to drop a knife he was holding.

Robbie Walsh said he picked the knife up, Mr Haugh then grabbed him and started dragging him around “like a rag doll”.

Robbie Walsh said as he was being dragged around, he then swung his right arm around and stabbed Mr Haugh in the back.

Addressing the jury Mr Grehan told the jury the accused could have dropped the knife and taken a beating but “then there might be somebody else on trial here today”.

Mr Gageby recalled the evidence of Anthony Lucey, who lived next-door to the deceased, and how he told the court that before Mr Haugh was stabbed, the three Walsh men were outside his house with Mitchell Walsh asking “where does Gobbo live?”

Mr Gageby also said either Clinton or Mitchell Walsh asked if Mr Lucey was a “pussy”.

Mr Gageby said: “He [Mr Lucey] told you [the jury] they were angry and agitated and he called the gardai.”

Mr Gageby asked the jury to consider if the three Walshes went to the Marian Estate with the sole intention of trashing Mr Haugh’s car, why did they “knock on doors” looking for Mr Haugh’s home and why did they call Mr Lucey a “pussy”.

“I want to suggest, at a minimum, there’s a very large question mark over the idea it was just for a bit of vandalism,” he asked.

He said: “Stabbing someone in back with a knife is not a trivial matter and a person is presumed to intend the natural and probable consequences of their actions.”

He also recalled the evidence of one witness [Michael O’Gorman] who said he met Mitchell Walsh on a street in Kilkee earlier that Saturday night and who claimed Mitchell Walsh told him: “We own this town, I feel like stabbing someone.”

Mr Gageby said there was “no justification” for the stabbing of Mr Haugh.

Mr Grehan SC, defending, told the jury, Robbie Walsh has “always maintained he did this”.

He recalled a recorded phone call which took place between Robbie Walsh and Mr Haugh before the Walshes went to Marian Estate in which Robbie Walsh told Mr Haugh “these two fucking eejits are drunk, leave this to tomorrow”.

“Was he leading his cousins to Karl Haugh’s door? No,” Mr Grehan said.

Counsel said “if someone is waving a knife at you”, a person can’t be excepted to consider what would be the reasonable response.

He added that, in Robbie Walsh’s own words, he “thought he was f*cked”.

“This is a situation where somebody acted in total self-defence, they were being attacked with a knife. It was a life and death situation none of us would ever like to be in.”

Ms Justice Carmel Stewart will begin giving her charge to the jury from 11am on Tuesday.