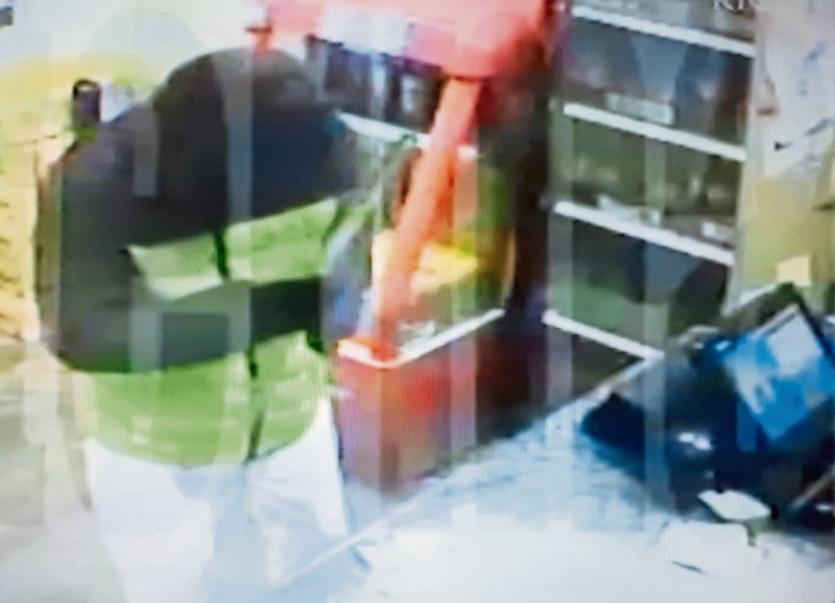 A still from the CCTV footage which was broadcast on Crimecall

GARDAI have issued an appeal for information about a break-in at an off-licence in the city centre earlier this year.

CCTV footage of the incident which happened in March was broadcast during Monday’s Crimecall programme on RTÉ One television.

In it, the culprit, who was wearing a bright-coloured puffy jacket and light-coloured pants, can be seen entering the premises at Church Street carrying what appears to be a weapon.

“We can see a man entering the off licence where he immediately goes to the till,” said Garda Greg Freegrove.

“He’s carrying a long blade –  possibly a sword –  and as he reaches into the till he removes a sum of cash,” he added.

The culprit, who was in the store for less than a minute, can be seen leaning over the counter and removing money from the cash register before putting it in his pocket and leaving the premises.

While the man’s face is covered throughout, investigating gardai are hopeful his distinctive jacket may result in him being identified.

No member of staff can be seen in the footage and it’s not known if the intruder interacted with workers when in the off-licence.

During Monday’s programme, CCTV footage from a camera located outside the premises show the man after he has left the off-licence.

“Up the street, he can be seen throwing the weapon away and running from the scene,” said Garda Freegrove.

Gardai at Henry Street are investigating the burglary and can be contacted at (061) 212400.