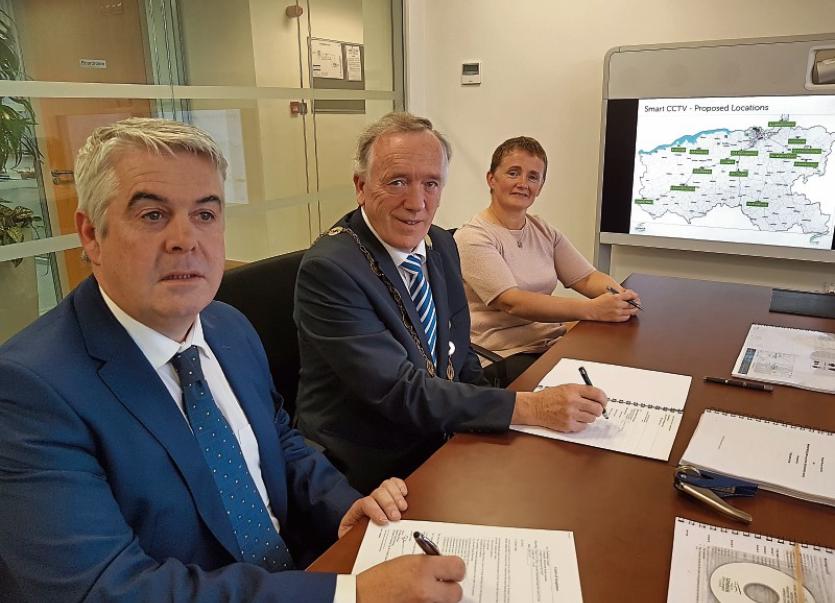 CONTRACTS have been signed for the installation of more than 40 hi-specification CCTV cameras in 14 towns and villages across County Limerick.

Limerick-based company Roadbridge was awarded the €350,000 contract to install the 44 cameras at 24 locations following a competitive tendering process by Limerick City and County Council.

As part of the roll out local NVR (video recording servers) with smart analytics capabilities, networking, communications and power management will be also be installed – allowing for remote access via smartphone to the live feed by authorised users.

The footage from the new cameras will be monitored 24 hours a day, seven days a week at Moyross Community Enterprise Centre, which is also being upgraded as part of the project.

“The Smart CCTV project enables us to work together with the gardaí and this is another example of the deep level of co-operation that exists between Limerick City and County Council and An Garda Síochána and illustrates the positive impact our work is having in various communities,” said Conn Murray, chief executive if Limerick City and County Council.

The pilot scheme links in with the one of the core objectives of the Joint Policing Committee Strategic Plan, which aims to review coverage, monitoring and maintenance of CCTV for its effectiveness and efficiency; extend and develop CCTV schemes outside of the city as well as combining CCTV with other aspects of surveillance.

“We have seen over the past number of years the benefit of having CCTV around the city.  It has been very beneficial to us in crime investigation and detection and from that point of view this project is going to transform crime investigation and detection in the county,” said the head of the Limerick garda division Chief Superintendent David Sheahan.