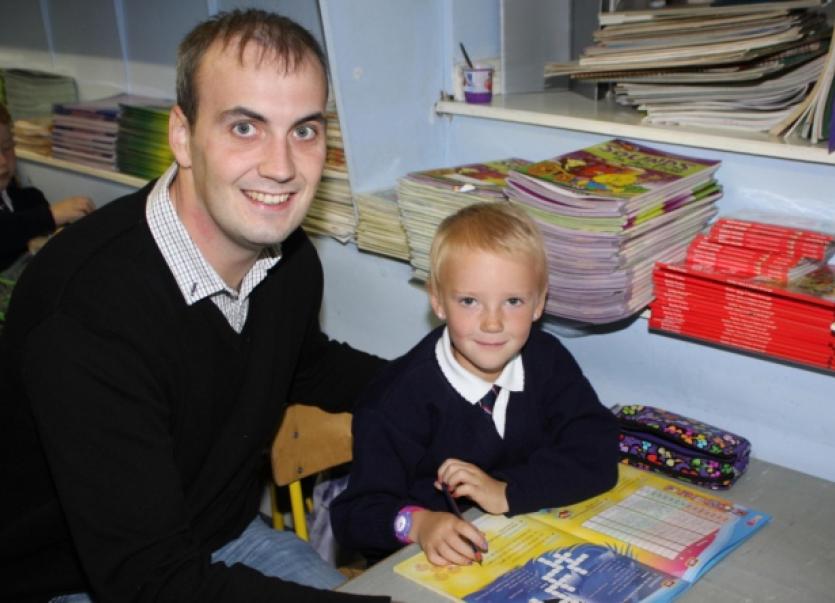 EVERY autumn, the largest childhood cancer awareness campaign, Light It Up Gold, rallies up and down the country, showing support to more than 1,200 young patients in Crumlin Childrens Hospital.

EVERY autumn, the largest childhood cancer awareness campaign, Light It Up Gold, rallies up and down the country, showing support to more than 1,200 young patients in Crumlin Childrens Hospital.

One of the leading faces of this year’s campaign is six-year-old Megan Maher, of Ardnacrusha.

An attentive first-class pupil in Gaelscoil Sáirséal, Bridge Street, and a “friendly and outgoing” character with all of her classmates, Megan’s rare condition goes unnoticed because she is no different from the rest of her contemporaries.

However, she suffers from an optic glioma tumour, which is a “rare, slow-growing, benign” tumour affecting the the optic nerves. She is blind in the right eye as a result.

Megan’s mother, Shari Maher-Daly, who spoke to the Limerick Leader about her daughter’s condition, says it went from a simple eye test, when she was five, to being sent to Temple Street after a few months.

“It actually began in Junior Infants with an eye test that the HSE would do, and they said that she may, or may not need glasses, and that they were happy to have her referred. But they said they would have her in May or June, so I kept chasing them and chasing them until I got them to see her in the end of October, but at that point Megan had lost sight completely in her right eye. And then it went a bit haywire. We went to the Regional Hospital and she was admitted and she was in Temple Street within three days. That was where they said she had an optic glioma tumour.”

However, when Megan began consultation with experts in Dublin, her mother was informed that her eyesight could have been mended if it had been brought to their attention in February 2012. Ms Maher-Daly says that was when she wanted Megan to get treated, but she was eighty-third on the waiting list at the time.

“We went to Temple Street to see Professor O’Keefe up there. He’s one of the top eye specialists in Ireland. He examined her there and said, because the optic nerve had been damaged, he couldn’t save her eyesight. Four weeks later, we were in Crumlin and we were told that she was to go through 18 months of chemo,” she explains.

Shari’s worst fear was the moment when Megan would finally realise the seriousness of her illness. But when Megan’s blonde hair began to fall out, her mother was surprised to see a “mature” reaction. She says that she and her husband were “more upset than Megan was”.

“She started treatment on November 27, and she could see that the long blonde hair was coming out. It was actually on the train to Dublin; she looked and she saw it. She said to me, ‘Look at my hair, it’s falling out.’ So I thought to myself, ‘Oh, here it goes,’ and I said to her: ‘Look, Megan, it is going to fall out.’ And she looked at me and asked, ‘Am I going to be bald?’ I said, ‘You are, but it will grow back.’ But that was it.

Because of her tumour, she occasionally suffers from neutropenia, which causes the immune system to break down and makes her vulnerable to infections. As a result, she was forced to pull out of swimming lessons and sleepovers with friends. Often, she is unable to attend classes if there is a sudden outbreak of any illnesses in the classroom.

“Because Megan is neutropenic, which means she has no immune system, she is out of school because you can’t risk her catching any bugs because that’s highly dangerous. So she would spend a lot of time at home, as opposed to school. If there’s an outbreak of anything at school, they ring me. She is out a good bit. But the school is brilliant. When I applied for home schooling, it was teachers from last year who would do the homeschooling with her.”

In the first few weeks of chemotherapy, Shari says Megan’s “spark” began to dwindle and she became “aggressive” and “distrusting” with unfamiliar faces. Because she cannot undergo chemotherapy when blood levels are not high enough, it is “impossible to pinpoint as to when her therapy will finish up”, she said.

She says she has to continuously stay with Megan at the hospital; when she is leaving the room, or when she is going to the bathroom.

“She once told one of the top oncologists as he was trying to give her medicine: ‘Can’t you see your medicine is making me sicker?’ And he actually started to laugh, turned to me and said, ‘That’s good. She’s a real fighter.’ Ms Maher-Daly says that was when the doctors saw the positive outcomes of the treatment.

Ever since, Megan has been gradually returning to her “outgoing” self with family and friends. She added that her tumour has not grown or spread.

“The plus side of all this is that it [the tumour] hasn’t got bigger, so it is stabilising. She had an MRI in June and she has another one in December. She has three in all. It is all positive at the moment because nothing has got worse,” she explains.

According to the “optimistic” mother, Megan’s only breakaway from her continuous treatment is going to school in Bridge Street.

“Everyone is so good and the school has been fantastic.

“I don’t think I’d be able to do it without them. They are on the ball. If anyone is even sniffling, they will call right away. She loves coming into school.

“And when she isn’t in the school, her friends would come over,” she affirms.

Gaelscoil Sáirséal’s acting principal, Ríona Uí Cheallaigh says Megan has a “great presence” in the school as she gets along with everyone and participates well in class.

“She seems like a regular first class pupil. She spends a lot of the time with friends and you really wouldn’t know that she had something wrong with her. She is so engaging in class and she is always smiling. She seems so happy, even though she has been through so much.”

Shari praises cancer awareness campaigns, such as Light It Up Gold and Aoibheann’s Pink Tie.