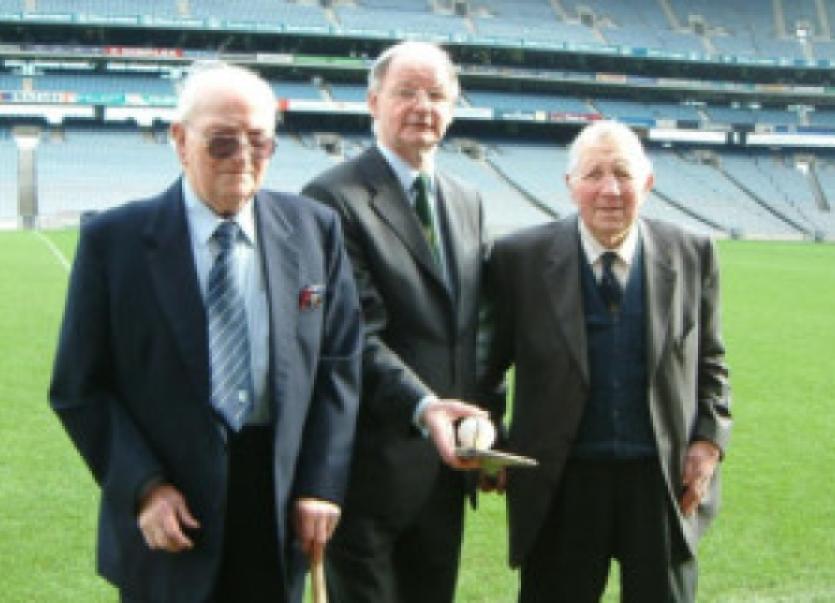 THE LATE, great Tony Herbert from Lisnagry left County Limerick for Dublin when he was just 23 years of age. But even then he had already accomplished more than most can dream of.

THE LATE, great Tony Herbert from Lisnagry left County Limerick for Dublin when he was just 23 years of age. But even then he had already accomplished more than most can dream of.

His peaceful passing at his home last Thursday night was a sad day not only for his family but for all Limerick GAA men and women. Just weeks after Tommy Cooke went to his God, Tony went to his eternal reward. He was 93. They were the last two survivors of the famous All-Ireland Limerick winning 1940 team.

Before he was 22 he had won nine championships with Ahane, an Oireachtas, Munster and All-Ireland medal with Limerick. He won his first championship when he was 16 playing with John and Mick Mackey.

His sporting career continued with Dublin and his club Faughs. Tony even instilled the same love for hurling in the streets of Crumlin that he experienced in the fields of Ahane. He started a street league that developed into St Columba’s GAA club.

But while Tony raised his family, worked and played sport for most of his life in Dublin, he remained a “staunch Limerick man”.

“My father was very Limerick, no doubt about that,” said one of his sons, Fergal. There will be some stories told now that all those legends are reunited in heaven, but their legacy on earth is more than intact.

Fergal said Limerick people, particularly from Ahane, travelled in force to Dublin. His close friend Charlie Chawke placed Tony’s 1940 All-Ireland medal on the head of his coffin and read the Hurler’s Prayer. “It was Charlie’s way of saying goodbye to my father. It was an emotional goodbye,” said Fergal.

Tony’s coffin was covered by the Ahane, Limerick, Faughs and Dublin jerseys. Another good friend, Eamonn Rea of the 1973 winning team, gave a graveside oration.

After the coffin was lowered into the grave his nephew Turlough Herbert broke into Where The Mulcair River Flows. “Turlough sang and sang brilliantly,” said Fergal.

“He got a huge Limerick send-off,” he said. Fergal did the eulogy in the church and could have spoken for hours due to the deep well of stories and his dad’s achievements.

“Charlie Chawke was one of the closest people to my father. My father loved Charlie and vice versa. Charlie is a superb Limerick man. He would go anywhere for Limerick, he brought my father everywhere to see Limerick play when he was able.

Whether it was in his political life as a Fianna Fáil member of Seanad Éireann or in the sporting world, Fergal describes his dad as “massive presence”.

“Eamonn Rea said at his graveside oration that in the 1973 Munster Championship final which Limerick won the last man on the field before the start was Tony Herbert. He said to Eamonn, ‘Make your presence felt’ and Eamonn made his presence felt,” said Fergal.

In the 1973 All-Ireland final Fergal said his father played a major part in suggesting that Eamon Cregan play centre back and Cregan gave “an exhibition”.

“He was close to any Limerick team he could get close to because they meant so much to him. I was with him in ’73 and he was absolutely enthralled once Limerick won,” said Fergal.

Tony played in two All-Irelands with Dublin, but it wasn’t to be. But he wasn’t only a GAA man. “Anything where Limerick was concerned meant a lot to him. He loved Young Munster, he reckoned there was cut in them, they had the Clohessys and John Earls playing for them,” smiles Fergal.

“His close friend during the Sixties was Gordon Wood. He went everywhere with my father. People used say to him, ‘Tony we know you, who is this guy with you?’ and he was a rugby international.

“My father never distinguished when it came to sport between rugby or GAA. He didn’t have any time for that, sport is sport.”

On leaving the church the soloist sang There is an Isle to applause. Tony’s remaining sibling after the passing of Sean, Tony, Eamonn, Mick, Helen who married John Mackey, and Maureen, is Eamonn Herbert. The two were close. Eamonn travelled every fortnight to see his brother in Dublin. While Tony’s health was failing his mind was as crisp as his cut of a sliothar.

“About three weeks ago we were talking, he loved going back to the Thirties. He asked me, “Do you know where John Mackey won his first medal?’ He said in Clonlara. John went over and he played minor with Clonlara. Of course he was illegal, going across the river.

“A few years ago I went into a pub in Clonlara and there was a photo of the minor team that won the championship and there was John Mackey kneeling in the front,” said Eamonn.

He described his brother as a “character”.

“He enjoyed life, he never forgot people. He got a lovely send-off,” he said.

Tony worked in insurance, corporation and in the Department of Education in Dublin but echoing his nephew, Eamonn said Limerick was always close to his brother’s heart.

Oliver Mann, chairman Limerick GAA County Board, said it was particularly poignant as it is the end of the link with the 1940 team.

“On behalf of Limerick GAA we would like to sympathise with his sons and daughters Patrick, Fergal, Ciaran, Brid, Carole and Maura, brother Eamon, extended family in Dublin and Limerick and many friends,” said Oliver.

Tony was laid to rest with his beloved wife Nancy in Kilmashogue Cemetery, now and forever a little piece of Limerick.