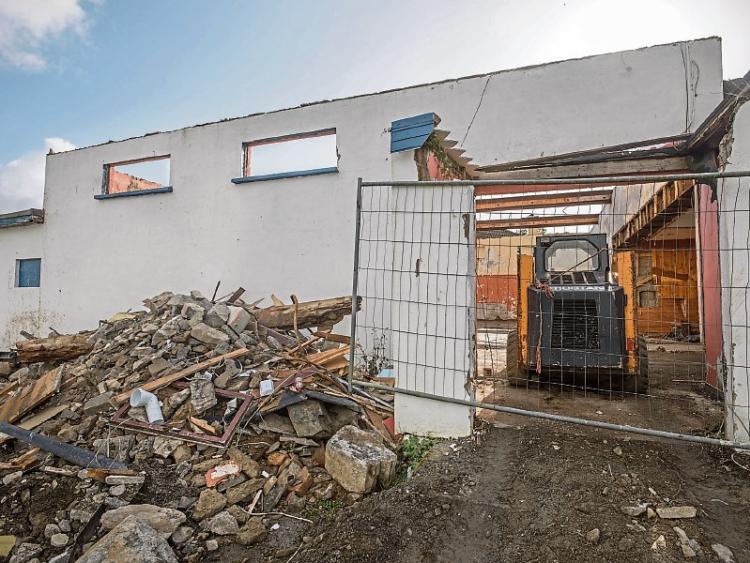 MEMORIES were stirred and shaken this week when the walls of the ballroom at the Ashford Tavern fell before the diggers.

The Tavern, for many decades before it closed, had been an iconic meeting place in West Limerick, a Ballroom of Romance where love was sparked or rekindled; a Hall of Fame for all the big musical names of the 60s, 70s and 80s and a Palace of Beauty where young women vied for the title Queen of the West.

But now, the Tavern, bought and owned by the community, is poised on the brink of a new future,and all as part of an ambitious five-year-plan for the parish of Killeedy.

“The work has started and we are making rapid progress,” said Jack O’Connor of the Kantoher Development Association which is one of the main drivers behind the project. “We are expecting to be ready in late spring or early summer.”

While the project involves demolishing a section of the lounge and dance hall, the bones of the Ashford Tavern will remain. The old, 19th century building fronting on to the street has been retained and will be refurbished to provide a Teach Cheoil where the musical heritage and tradition of the area will be nurtured, celebrated and promoted. To the rear, a section of the ballroom will also be refurbished to provide a gym and youth space and joining the two will be a new extension housing a kitchen, bathrooms and reception area.

The new complex will provide a base for the 130-plus members of the local Comhaltas Ceoltóirí Group who run weekly classes and sessions. But it will be flexible enough to provide for community events such as funerals and for a pop-up or seasonal cafe for the many walkers now discovering the Broadford/Ashford Walking Trails.

"We didn't want to clash with existing facilities in the parish," Jack O’Connor, secretary of the Kantoher Development Group explained. But a parish needs survey was conducted and the Tavern project has been designed precisely to meet those needs.

The project was launched almost two years ago when it was estimated to cost €260,000, of which approximately €180,000 has come from West Limerick Resources while local initiatives such as Buy a Brick, raffles and Siamsa Killeedy helped make up the difference.

Meanwhile, at the other side of the parish, work on the innovative reed bed waste water plant has been completed. “We are waiting for the official handing over,” Jack O’Connor said.

The eco-friendly plant will initially service the Kantoher Business Park where over 80 jobs have been created and allow it to expand.

But work has also been forging ahead on the Eco-Park which has involved transforming some of the old Kantoher ‘ponds’ into recreational lakes for water sports and activities. The project also includes a wildlife sanctuary as well as nature trails and a perimeter walk.

The official opening is expected within the next few weeks.