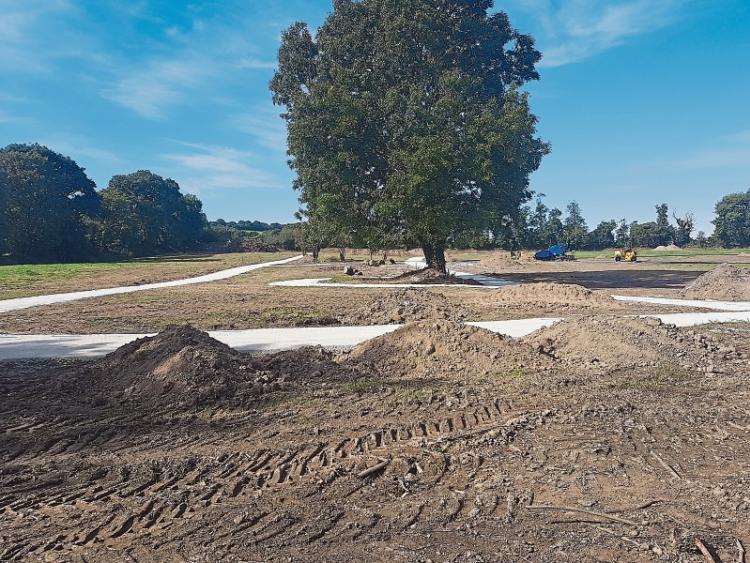 Work is underway on the seven acre site

THE dream of a town park in Dromcollogher is within touching distance and at the weekend, the people of the town got their first taste of things to come when the official turning of the sod took place.

But, as treasurer of Dromcollogher Community Council, Eileen Twomey explained, the work of transforming the field into a park is well underway.

And they expect to be opening the gates to the public within the next two to three weeks.

The project has been four years in the making, beginning with a presentation to local councillors and a survey of local people.

A second survey drilled a bit deeper to find out exactly what people wanted in their park and the consensus was something for young and old, for the 800 students who come into Dromcollogher every day, for the young families and for those using the Day Care Centre.

But fitness featured too and the Community Council was mindful of the research that said too many people lead sedentary lives.

Securing a long-term lease on seven acres of an eight-acre field owned by Limerick City and County Council and known locally as the Fair Field was the key to unlocking the project.

Then, came the fundraising.  €55,000 was raised locally through a hugely successful Strictly Come Dancing event  and a grant of €155,000 was secured  from West Limerick Resources, opening the way for the first phase of the work to get underway earlier this month.

“It is a beautiful, natural landscape,” Ms Twomey said. “We aim to keep a natural feel.”

Phase one, she explained, involves ground works, clearing the river bank and installing ducting for lighting and installing a perimeter path around the entire site with some internal paths. It will also include landscaping, with native trees and shrubs to match those already there.

Further phases will include a sensory garden, seating, an outdoor , a picnic area and playscapes for children.

“The jewel in the crown,” Ms Twomey said,” is the fairy fort located on the site.” There are, she added, some 40,000 such structures in the country but none in a public park and they intend to take full advantage of this with a fairy trail to capture a sense of magic for children.

The park, the Community Council is confident, will be an attraction for parents walking children, for adult runners and walkers, for park runs and treasure hunts and  for youngsters exploring nature. “We are going to leave a legacy for future generations,” Ms Twomey said.

Along with their other plans, the Community Council hopes it will help attract people back to live and work in what is a busy, thriving town and vibrant community.

The  park forms part of an overall plan for the town which is being developed by Dromcollogher Community Council in partnership with Limerick City and County Council. The plan includes a public realm plan which is now in draft form and which is due to be agreed shortly.