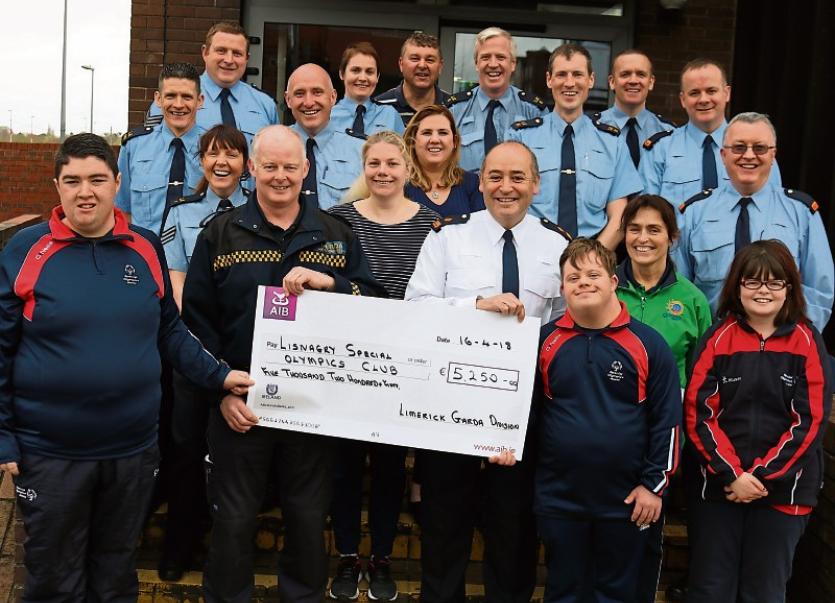 LOCAl gardai who climbed Croagh Patrick earlier this year have  presented a cheque for more than €5,200 to Lisnagry Special Olympics Club.

The sponsored climb took place in February to raise funds for the 17 athletes and 14 coaches from St Vincent’s centre who will be attending the Special Olympics Ireland Games in June.

“They have to pay for their own tracksuits and it’s costing around €400 per athlete so we decided to raise money to put towards that,” said Sgt Pat Brennan, who is attached to Henry Street garda station.

“We got an idea that we would climb Croagh Patrick and 30 people took sponsorship cards and in total we raised more than €5,200 so because of that the cost of the tracksuits has been halved,” added Sgt Brennan whose daughter, Laura, attends St Vincents.

Around 1,600 athletes will travel to Dublin to compete in the Special Olympics Ireland Games which take place between June 14 and June 17.

“It (the money) makes a huge difference to us because each athlete pays for their own way to go to the games so it was working out at €460 per athlete and because of the climb, that cost was reduced to €200,” said Susan Kenny one of the coaches at Lisnagry Special Olympics Club.

“There is a lot of support but it costs money to be up there (in Dublin) – transport, accommodation, food entertainment – it doesn’t run itself and we always need money and this was a really boost for us which we hadn’t expected,” she added.

Several gardai from across the Limerick division took part in February’s along with friends and family.

“It was cold, there was ice and snow on top of the mountain. We all met at 11am and we were back down by three,” added Sgt Brennan.