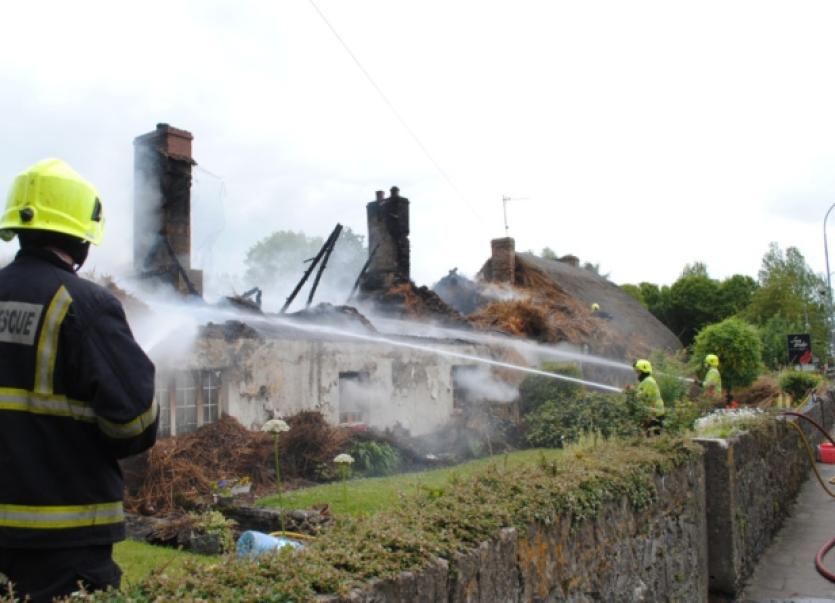 The owner of one of the two historic thatched cottages destroyed by a fire in Adare at the weekend has said the family is deeply upset by what happened.

The owner of one of the two historic thatched cottages destroyed by a fire in Adare at the weekend has said the family is deeply upset by what happened.

Henriette Benson said all their possessions were destroyed in the blaze which started on Saturday afternoon.

Several units of the fire brigade fought for several hours to get the fire under control and prevent it spreading to the neighbouring properties in the historic line of thatched houses.

“It is destroyed and we are very upset. Everything we had was in that house,” said Ms Benson.

Her parents Willie and Mary, who took great pride in the cottage and gardens, both died in the past 18 months.

However, there has been praise for the fire services for their efforts in preventing the fire causing further damage.

Eight units - from Rathkeale, Newcastle West, Foynes and Limerick city - fought the blaze for several hours on Saturday afternoon, with fire personnel remaining at the scene until almost midnight.

Lucy Erridge, who owns a shop next door to the Benson’s cottage, said she was “unbelievably lucky” that the fire did not spread and she attributed this to the excellent work of the fire brigade.

“It is completely down to them and they are complete heroes,” she said.

“They really did everything they could do to save my cottage.”

According to a fire service spokesman, they were able to prevent the fire spreading to her property by removing thatch to create a two-foot fire break.

Amazingly, Ms Erridge, who was not in the shop at the time the fire started, heard about it when she was contacted by her son who is currently working in Spain. He had seen a picture of the fire on social media and recognised the shop.

“He rang me and he said ‘Mum that looks suspiciously like your cottage’, Ms Erridge recalls.

When she arrived at the scene she was shocked to see smoke billowing from the neighbouring properties and fire fighters desperately trying to combat the flames.

“It looked touch and go for a while and one of the fire brigade said to me ‘you should think about removing some of your stock’,” she recalled.

As they began to remove the stock, the local community sprung into action to lend assistance. “People arrived from everywhere in the village and they passed stuff from hand to hand and they got everything out.”

Apart from water damage to the rear wall, the cottage escaped largely undamaged. “We are most fortunate. The place is very good and we hope to be open by Friday or Saturday, she added.

Maeve Martin-Kelly, manager of the nearby Adare Heritage Centre, said everybody in the village was “devastated” for those affected by the fire and particularly the Benson family. “The family is so well-known in the village and they have put so much into the community,” she said.

Ms Martin-Kelly added that the Adare business association would be working with Limerick City and County Council and the other relevant agencies in the weeks to put some temporary arrangements in place to cover up the damage.

“We would like to help in whatever way we can,” she said.

Meanwhile, local councillors passed a resolution at this week’s meeting of the Adare Rathkeale municipal area calling on the government to put in place a scheme to reduce the cost of fire insurance for thatched cottages which are used for residential purposes. The motion was put forward by Cllr Kevin Sheahan who warned: “there won’t be a thatched cottage left in the country because of fire insurance”.

He was supported by Cllr Emmett O’Brien who pointed out that insurance quotes for thatched cottages were “inordinately high”.

It is a view shared by Limerick TD Dan Neville, who said: “Adare is a bustling tourism village, with the cottages as the key attraction. I will discuss this issue with my colleague, Minister for Transport, Tourism and Sport, Paschal Donohoe and I intend to express to him the importance of addressing this issue without delay”.