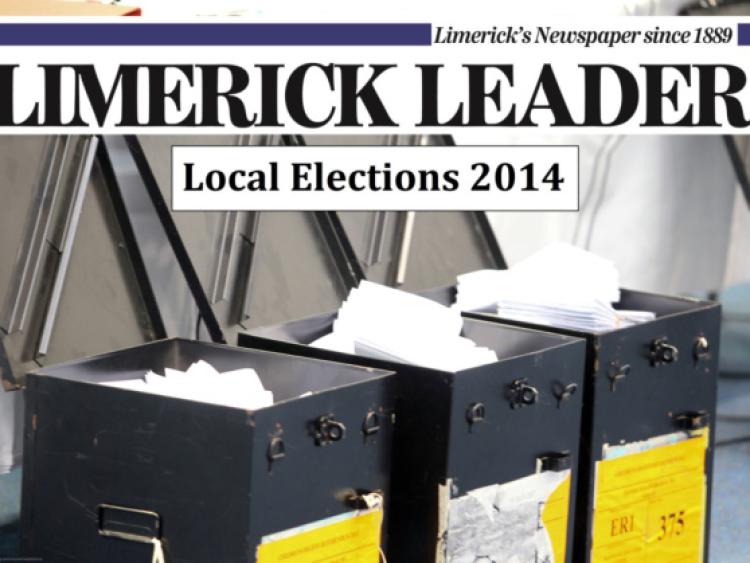 The Limerick Leader’s team of reporters and photographers are providing live coverage of the count from the UL Arena across the weekend on Twitter (@limerick_leader) and here at www.limerickleader.ie

The Limerick Leader’s team of reporters and photographers are providing live coverage of the count from the UL Arena across the weekend on Twitter (@limerick_leader) and here at www.limerickleader.ie

Michael Donegan (FF), Gerard Mitchell (FG) and Bill O’Donnell (FG) have all been elected in the Cappamore/Kilmallock electoral area following the sixth and final count without reaching a quota.

No candidate was elected following the third count in Limerick city east. The count has been adjourned to 9am tomorrow when the votes of Derek Mulcahy (Lab) will be distributed.

Noel Gleeson (FF) has been elected following the fifth count in Cappamore/Kilmallock. Mike Houlihan (FG) has been eliminated and his 1,208 votes are now being distributed. The count looks likely to conclude in the next hour or so.

No candidate was elected following the fourth count in Limerick City North. Frank Ryan (Ind) has been eliminated, and his 235 votes will be distributed. The count in City North is now adjourned until 9am tomorrow.

The counts are coming thick and fast at the UL Arena but there are still just six candidates elected to Limerick city and county council.

No candidate has been elected following the second count in Limerick city north. Patrick McCarty (Ind) has been eliminated and his votes will now be distributed.

No candidate has been elected following the third count in Cappamore / Kilmallock. Lisa Marie Sheehy’s surplus is now being distributed.

Sinn Fein’s Séighin Ó’Ceallaigh has topped the poll in Limerick city east with Shane Clifford of Fianna Fail also being elected on the first count having passed the quota.

No candidate has been elected following the second count in Cappamore / KIlmallock. Eddie Ryan’s surplus is now being distributed

Cllr Maurice Quinlivan has been elected in Limerick city north after topping the poll with 2,456 first preference votes. His surplus is now being distributed.

The returning officer, Eugene Griffin, has welcomed everyone to the count centre for the historic count which will see 40 councillors elected to the new Limerick City and County Council.

The counting of votes for Limerick city east, Limerick city north and Cappamore / Kilmallock is now underway with the results of first counts expected after 7pm.

The final tally of boxes in the Newcastle West electoral area shows that Cllr Jerome Scanlan (FG) is likely to top the poll with 18.5% of the vote. Cllr Liam Galvin (FG) at 13.6% and Cllr Michael Collins (FF) at 12.9% are also likely to take seats.

The final tally of boxes in the Adare/Rathkeale area shows that independent candidate Emmett O’Brien is likely to top the poll with 18.5% of the vote. Tom Neville, son of Deptuty Dan Neville is on 15.4%, Cllr Stephen Keary (FG) is on 14%, Cllr Kevin Sheahan (FF) is on 9.9%.

Cllr Rose Brennan (FG) has polled at 6.3% while Fianna Fail’s Richard O’Donoghue and Seamus Sheahan have 7.3% and 5.7% of the vote respectively. Cllrs James Kavanagh (FF) and Patrick C Fitzgerald (Ind) face a battle to retain their seats, according to the tallies.

FINE Gael councillor Michael Hourigan, who is set to take the second seat in City North, says his party have to “come back stronger” following the local elections.

There has been a huge swing towards Sinn Fein and the Anti-Austerity Alliance in the local election, and Cllr Hourigan says now is the time to “take stock”.

“I was disappointed with the Fine Gael vote in the city, and I think the people of City North have sent a message to the government that they are feeling the austerity,” he said.

He added: “I believe we need to sit up and take stock of what the people say. We are strong enough, and have the ability to come back stronger from this.”

Cllr Hourigan says the work he has done over the last five years “justifies” his election to the newly merged local authority.

With the sorting of boxes continuing at the UL Arena, the count proper is not expected to get underway until 4pm. The returning officer, Eugene Griffin has indicated the count will wrap up at 10pm before resuming at 9am tomorrow.

The Limerick Leader’s Nick Rabbitts reports that Anti Austerity Alliance candidate Cian Prendiville, who is on course to secure a seat Limerick city north says there is now a “huge network” of people ready to fight the water charges.

Mr Prendiville looks likely to take the fifth seat in the six-seater electoral area, with tallies showing he has taken 840 first preference votes.

He said: “It looks like the people of Limerick have used this election to send a message to the government that they cannot afford the water tax. Candidates who have said they oppose water charges have done well across the board.”

Mr Prendiville, of Woodview, believes he has taken votes from “disenfranchised Labour voters”.

He added if he does secure a seat at City Hall, he will use it to “start the process of building the fight against water charges from Monday.”

The Limerick Leader’s David Hurley reports that the latest tally in Adare/Rathkeale shows Tom Neville (FG) is leading the way with 14.7% of the vote. Independent candidate Emmett O’Brien is also performing well with 13.6% of the vote.

Stephen Keary (FG) is line to retain his seat with 12.7% of the vote while the three Fianna Fail candidates - Richard O’Donoghue, Cllr Kevin Sheahan and Seamuss Sheahan are neck-in-neck on 8.5%.

According to the Limerick Leader’s Áine Fitzgerald, the returning officer Eugene Griffin has said the #LimerickCount will not continue past 11pm and is certin to continue into tomorrow.

According to the Limerick Leader’s David Hurley, early tallies in the Newcastle West electoral area show that Fine Gael is performing well with Liam Galvin on 22.2% and Jerome Scanlan on 17.7%.

According the Limerick Leader’s Donal O’Regan, the tally desk for Cappamore/Kilmallock is deserted and it looks like voters have deserted Fine Gael.

It looks like three sitting Fine Gael councillors - Bill O’Donnell, John Egan and Mike Houlihan will be fighting it out for the last seat.

Tallies show O’Donnell and Egan on 7.5% with Houlihan on 7%.

Next comes Fianna Fail’s Noel Gleeson on 9% and Mike Donegan on 8.7%.

Fine Gael’s Gerald Mitchell looks like getting the sixth seat with 8.6% of the vote.

As it stands Fianna Fail are back in a big way in County Limerick with a likely three seats.

The Limerick Leader’s David Hurley reports that the final tally of boxes in Limerick city east shows that Sinn Fein’s Seighin O’Cellaigh looks set to top the poll with 14% of the vote.

Another first-time candidate, Shane Clifford (FF), is also in line to take a seat having secured 11.4% of the vote. Michael Sheahan (FG) is on 7.7% while Elena Secas (Lab) has bucked the trend by securing 7% of the vote. Marian Hurley (FG) and Leo Walsh (FG) are neck-in neck having secured 6.4% and 6% respectively.

According to the tallies, Cllr Quinlivan has taken 2,327 first preference votes, or 25.1% of the vote.

The first results from City North are not expected until this evening, with counting due to get under way at around 3pm.

The Limerick Leader’s Donal O’Regan reports that With 38 out of 56 boxes tallied in Cappamore/Kilmallock Fianna Fail’s Eddie Ryan; Sinn Fein’s Lisa Marie Sheehy and Brigid Teefy all look certain of being elected. They stand on 18.4%; 13.9% and 16.2% respectively.

Ms Sheehy, the 20-year-old UCC student from Glenroe, said she was “overwhelmed”.

It looks like being a dog fight for the remaining four seats with a real chance of a sitting Fine Gael councillor losing their seat.

The Limerick Leader’s Nick Rabbitts reports that with almost half the tallies in from Limerick city north, it looks like Councillors Maurice Quinlivan (SF) and Michael Hourigan (FG) will battle it out to top the poll.

According to the latest unofficial tallies, where 44.7% of the boxes have been opened, Cllr Quinlivan leads the way with 877 votes, and Cllr Hourigan is just behind with 824 votes.

Cllr Quinlivan said: “Sinn Fein are polling very very well. It does look like we are going to take a number of seats. I won’t be the only Sinn Fein councillor on the new authority, there will be a number.”

It also looks likely that there will be a Sinn Fein MEP in the shape of Liadh Ni Riada, with reports that she is getting a strong vote in areas as diverse as Janesboro, Caherdavin, Monaleen and Castletroy.

Richard Fahy, Mr Daly’s campaign manager says the 28-year-old has picked uip around 150 votes in Moyross, and puts this down to parents of the youngsters he has targetted through Northside Legacy.

While the European votes are not been officialy tallied at the UL Arena, there are early indications that Sinn Fein’s European candidate, Liadh Ni Riada, looks set to do very well in Limerick.

The Limerick Leader’s Donal O’Regan reports that with 4,681 votes tallied in Cappamore Kilmallock and 16 of 56 boxes opened Sinn Fein’s Lisa Marie Sheehy is continuing the national trend with 17.4% of number ones.

Boxes tallied have been mainly from Kilmallock, Galbally, Ardpatrick, Effin and Anglesboro.

Considering Kilmallock is Mike Houlihan’s stronghold it is somewhat surprising that he is only on 11.7%.

The two Independents - Brigid Teefy and Joe Meagher are on 6.4% and 2.4% respectively.

The Limerick Leader’s David Hurley reports that with 19 (38%) boxes from Limerick city east tallied, Sinn Fein’s Seighin O’Cellaigh is the leading candidate with 15.5% of the vote. Cllr Michael Sheahan (FG) and Elena Secas (Lab) are also polling well with 9.3% and 9.2% of the vote respectively. Marian Hurley (FG) and Cllr Kieran O’Hanlon are also performing well with over 7% of the vote.

At three boxes in Caherdavin, however, Cllr Quinlivan appears to be taking the fight to Cllr Hourigan and Mr Crowley.

And Mr Prendiville appears to be polling solidly in boxes near his home place of Woodview.

A number of candidates, who contested yesterday’s local elections, have arrived at the count centre at the UL Arena as the sorting of the boxes continues.

The first boxes have been opened and tallied in the Limerick city east, Limerick city north and Cappamore / Kilmallock electoral areas and there are indications that Sinn Fein polled well is yesterday’s local elections, we should have clearer trends by 11am.

It’s all kicked off at the UL Arena following yesterday’s local and European elections. There is areal buzz and sense of excitement in and around the count centre as the tallymen get to work as the votes are being sorted by count staff.

The first task is to separate the votes cast in the local elections from those cast in the European elections. Once that process is complete, the count proper will get underway starting with the Limerick city north, Limerick city east and Cappamore/Kilmallock electoral areas.

Unofficial figures, indicate the turnout in Limerick yesterday was around 50%.

The Limerick Leader’s team of reporters and photographers will be providing live coverage of the count from the UL Arena across the weekend on Twitter and at limerickleader.ie.