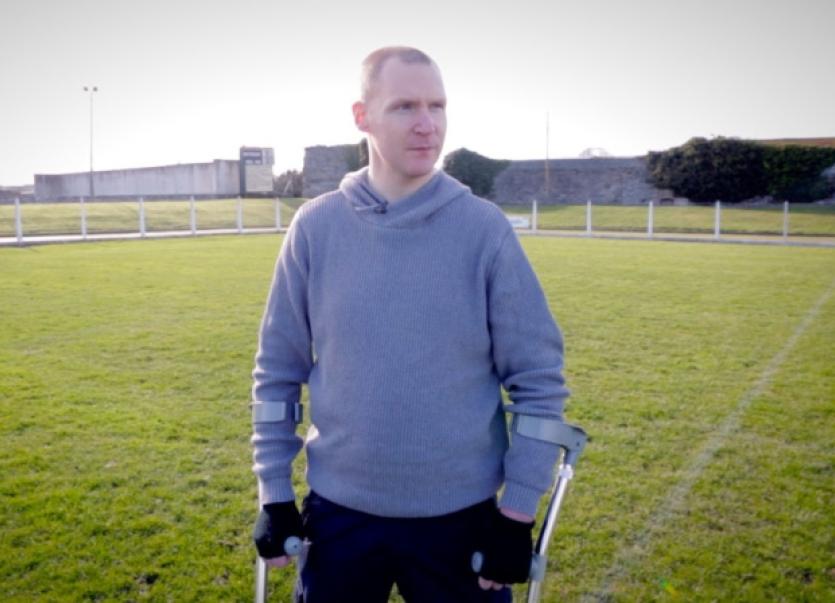 AN AWE-INSPIRING documentary chronicling the life of hurler Dessie Fitzgerald since a horrific injury left him paralysed has been launched to coincide with a fundraising drive in aid of the Charleville man.

AN AWE-INSPIRING documentary chronicling the life of hurler Dessie Fitzgerald since a horrific injury left him paralysed has been launched to coincide with a fundraising drive in aid of the Charleville man.

Everything changed for the talented hurler on Saturday, October 8, 2011 in a county semi-final against Kilbrin.

Dessie was particularly nervous the morning of the game because his younger brother Mike had passed away two months previously and he wanted Charleville to win the game for him.

Charleville were ahead. Dessie went to flick the ball away. His feet were off the ground and he ended up in a collision between two players.

Dessie’s wife Sarah was on the sideline. In the 10-minute online documentary entitled The Dessie Fitzgerald Story Sarah recalls seeing Dessie on the grass. He wasn’t moving.

“I remember seeing the fear in his face and it’s something I didn’t often see with Dessie.”

Dessie had been was on top of his game, was very fit and was enjoying life.

He was on the Cork minor hurling panel of 2000 which contested the All-Ireland final. Dessie won Harty Cup (Munster) and Croke Cup (All-Ireland) Colleges medals with St Colman’s, Fermoy in 2001.

Doctors in the Mater hospital told him that it was central spinal chord syndrome and that they didn’t know if he would move again.

“I used to lie on the bed and visualise myself actually moving - I would visualise my foot moving, my leg moving and I would do that as often as I could.”

Dessie and Sarah had planned their wedding for March 16, 2012.

He decided that it would be a great goal to move towards.

“The focus for me was to get up on my feet and hopefully take a few steps on the day.”

With the assistance of his two brothers Dessie was standing at the top of the altar of Holy Cross Church in Charleville when Sarah arrived.

While Dessie was always very positive in rehab, when he came home, something changed.

“Deep down I felt I’m not good enough to be going home. I felt so different and that’s when I started to get depressed. There was mornings I woke up and I felt I just didn’t want to get out of bed.”

He speaks in the documentary of an anger and frustration that built up within himself.

His life took an even sadder twist when his younger brother James passed away from Sudden Adult Death Syndrome in October 2012. “I was a walking ball of anger before that but I didn’t know what to do when I got that news. I was just distraught.”

When he saw the impact that James’ death had on his family, he knew that he had to pull himself through.

Much of his week is spent undergoing therapy. He attends a physiotherapist in Charleville twice a week and goes to an osteopath in Cork. He attends First Steps rehabilitation and also travels to France for laser treatment.

Due to ongoing intensive therapies and treatments he is now walking with the aid of crutches and has limited use of his hands.

“If funds weren’t an issue I would be going to France 10 times a year just because of the benefits it has. The costs involved with a spinal chord injury are pretty huge - the support I have received from Charleville GAA Club has absolutely astounded me. It’s not only Charleville GAA Club - it’s the whole community.”

As soon as he gets up in the morning, Dessie knows that it will take him two hours to get ready.

“It’s heartbreaking because he was such a strong physical person before and now something so easy can take him so long to do,” said Sarah.

A major goal for Dessie is to get back to work. The couple recently celebrated the birth of a little boy.

“It’s the most wonderful feeling in the world but I also feel so protective and I feel the need to get myself as fit and mobile as I possibly can.”

A very poignant moment in the documentary sees Dessie return for the first time to the pitch in Buttevant where the accident occurred.

“I want to be able to bring my son up here and hopefully walk out onto the field with him, unaided, without any crutches and without having to plan every move I make. Hopefully I’ll get involved and maybe coach them - that would be really good.”

The footage ends with a tribute by legendary broadcaster Micheal O’Muircheartaigh who first met Dessie in the National Rehabilitation Centre in Dun Laoghaire.

Micheal, who speaks of Dessie’s “infinite courage”, is urging people to get behind a number of fundraising events in July.

Charleville GAA Club launched The Dessie Fitzgerald Injury Fund on Friday night and fundraising events include a bucket collection at the Munster SHC Hurling Final on July 12, a fundraising banquet with Mícheál Ó Muircheartaigh in the Charleville Park Hotel on Friday, July 17, a golf classic in Charleville Golf Club on July 17 and 18, and a 5km walk/run in Doneraile Park on July 19.

For further details and to view the Dessie Fitzgerald Story log onto www.dessiefitzgerald.com