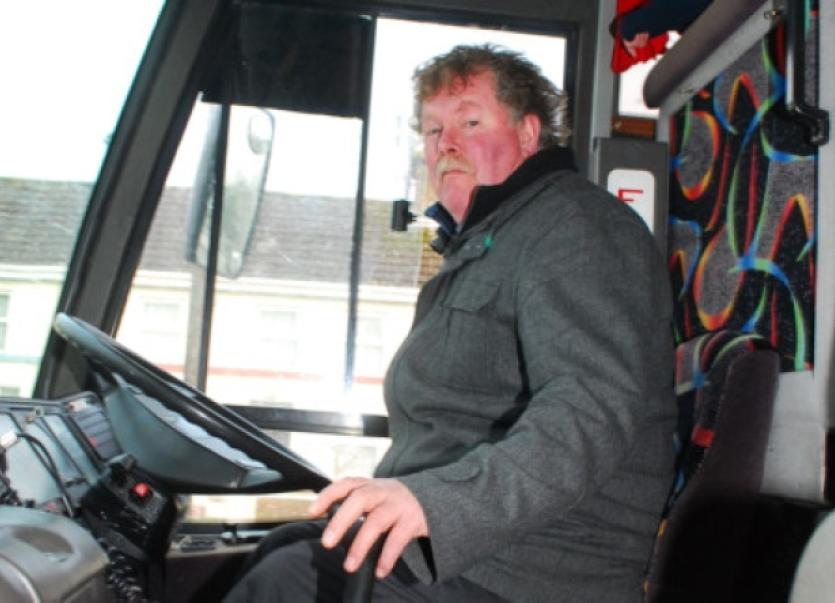 A SCHOOL bus carrying 50 primary school students had to be escorted by gardai as debris from Wednesday’s devastating storm battered the vehicle on its way from Kilmallock to Bruff.

A SCHOOL bus carrying 50 primary school students had to be escorted by gardai as debris from Wednesday’s devastating storm battered the vehicle on its way from Kilmallock to Bruff.

The bus driver, Davy Ryan from Bruff, described the conditions as the worst he has seen in his 35 years behind the wheel.

“I have never seen anything like it in my life,” Davy told the Leader from the roadside on Wednesday afternoon. “I went five different routes to get to Bruff. It took me over an hour and a half to get from Kilmallock to Bruff. I turned in four different places to get down there. Eventually I came across the gardai at McAuliffe’s pub and they took me down by Dromin.”

The schoolchildren from Scoil Dean Cussen in Bruff were on their way home having attended a school musical at Kilmallock Enterprise Centre when the storm struck.

“I’m driving 35 years and I’ve never seen anything like this,” Davy continued. “A bush flew across the road at one stage and whipped the wiper clean off the windscreen. I don’t know how it didn’t come through the windscreen.”

Davy and the gardai were forced to pull up four or five times on their journey to clear the road of debris.

“There were large bows of trees and branches all over the place. I saw sheets of timber flying through the air in the industrial estate in Kilmallock. It was absolutely unreal,” he said.

While he described the weather conditions as relatively calm when he made the journey to Kilmallock earlier in the morning, at a quarter to one “it just blew up all of a sudden”. “It was like a continuous hurricane for about an hour or a half.” The schoolchildren, he said, were “fine at first” but grew nervous as the conditions deteriorated. Davy, has been commended by parents and the local community for his calmness and professionalism in the eye of the storm. “I would die for them kids I would, absolutely - they are like my own family,” he said.

Meanwhile, at Scoil Mocheallog in Kilmallock “petrified” parents began arriving at the primary school shortly after one o’clock as staff and students took refuge from the storm in the school hall.

“There were slates flying so we moved the kids into the hall in the old girls school,”explained the school principal, Michael O’Connor. “I manned the door. The wind was so strong that it blew me back in on two separate occasions. It was unbelievable.”

Such was the severity of the storm that electricity was lost in the town for several hours leaving Michael unable to get a message out to parents of the 303 boys and girls who attend the school. “Parents were smart enough to realise how serious it was.”

Six miles away at O’Rourke’s Cross on the main Limerick to Cork road, businessman James Beechinor was left counting the cost of the battering storm.

The canopy of his Xpress Stop service station was “flattened” onto the shop building as gale force winds ripped through the business premises. “The wind blew it up on the front of the shop. We are closed now and we won’t be operating for a couple of days. I would say that this is worse than the mini tornado we had in Kilmallock before Christmas.”

According to gardai, over 40 trees were uprooted in the Bruff garda district during the storm and hundreds of homes were left without power.

There was no access to the town of Kilmallock or the village of Galbally as a result of fallen trees on approach roads. Electricity was down in Kilmallock, Croom, Bruff and Charleville at the time of going to press.

Cllr Eddie Ryan of Galbally described council workers as being “absolutely extended to the limit”. “People are basically helping the council to clear the road. I have had nearly 1000 phone calls from people. They have diggers, chainsaws and everything out there trying to clear the roads in Grange, Kilfinane and Galbally.”

Cllr Mike Houlihan was on his way to Limerick to a council meeting and had to turn back having come upon an articulated truck overturned on the road near Croom.