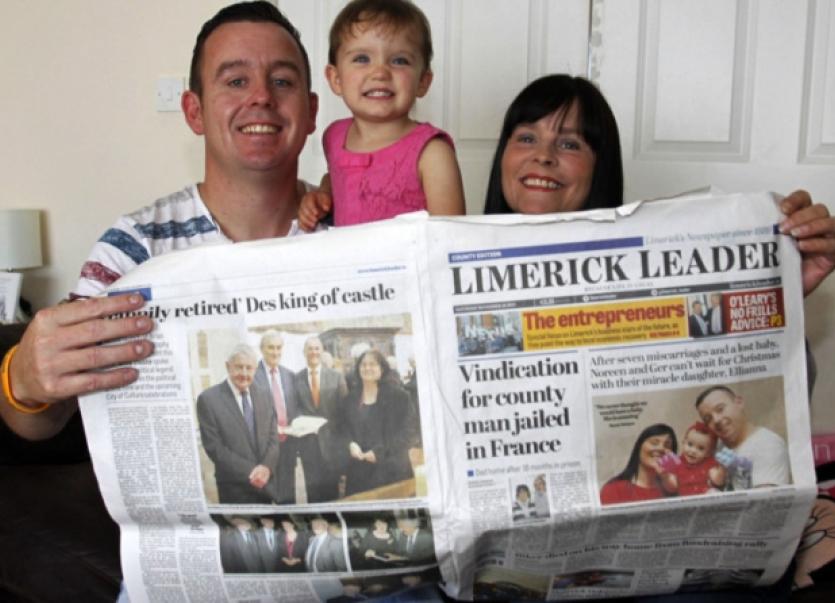 A PROUD dad has gone back to complete his Junior Cert at the age of 35 for his little girl.

A PROUD dad has gone back to complete his Junior Cert at the age of 35 for his little girl.

Ger Thompson was inspired to return to education so he can he can give the help to his daughter when she comes home from school that he didn’t get.

It is a hard decision to return to the classroom after so many year away but Ger says it is one of the best of his life.

“Growing up in the Eighties/Nineties in Moyross was tough. I attended the Model before being switched to Corpus Christi when we arrived in Moyross,” said Ger, who now lives in Murroe. He went onto St Nessan’s Community College but didn’t last long. “At 14 and still hardly able to think for myself I was expelled. I found school very tough as there wasn’t much help at home, both my mother and father left school early too. It was OK at primary but at secondary level they struggled to provide the extra help I needed when doing homework,” said Ger.

So as a 14-year-old boy he became a working man.

“I got my first job at the Markets Field greyhound track. I now had money and plenty of time on my hands. It wasn’t long before I found my way into trouble. It was easy in the early 90s for a young boy with a wage to get himself into a situation that would seriously affect how his adult life would turn out.

“I soon found my way into drugs – starting with cannabis and moving swiftly along to harder drugs, which were readily available to a 14-year-old in Moyross with plenty of cash. So out of school and out of control I carried on like this for some years,” said Ger. He always found jobs but never lasted long as he had a self-confessed “serious attitude” and didn’t like authority figures.

Like with many men it was a woman that changed him.

“In 2003, I met my now wife Noreen. We married in June 2004 and very quickly tried to start a family. What was to happen over the next ten years would either make or break me,” said Ger. The Thompsons told their incredible story of bravery and courage to the Leader a year ago. The couple had seven miscarriages and a baby who died shortly after being born before after having a beautiful little girl - Ellianna. They told their story to give hope to others in similar situations and now Ger is doing the same.

“Anyone would think that I might have spiralled out of control but for the first time in my life I had to be strong not only for me but for my wife. I had someone else to think about besides myself. These traumatic events in my life, even though I didn’t know it at the time, would start to shape me into the man I would eventually become.”

The birth of Ellianna in 2012 changed how he saw the world.

“I was now a father and I had to be the best father I could be. Remembering my early years - not having help at home and being in all the dead-end jobs that only uneducated people like myself would get - a light went off in my head.

“I was sitting at home after being made redundant thinking to myself that I needed to right the wrongs in my life - starting with my education,” said Ger.

A jobs open day in Thomond Park opened his eyes.

“I found I couldn’t apply for one job as they were all skilled. What I did find were college stands and courses in LIT and UL. I was pointed in the direction of the Downtown Centre and Patricia Anne Moore who put me in touch with a great man called Pat McInerney. Pat set up a meeting and put me on a foundation course at Limerick City Adult Education College,” said Ger, who is doing his Junior Cert before taking the Leaving.

“Ellianna is two. I hope that by the time she is old enough to ask for help with school work I’ll be able to jump straight in.

“I would say to anyone in Limerick thinking about going back to education that they should definitely do it. At 35 I am not the oldest in my class but I’m not the youngest either. There are people of all ages from all walks of life attending VTOS.

“Teachers, staff and students are very supportive and help you to settle in straight away. Everyone is working toward a common goal of educating people who thought they had lost their chance,” said Ger, who says his wife and daughter are the “inspiration behind the new Ger Thompson”. As well as studying he is training for the London marathon and organising a charity ball in memory of Kayla, who passed away shortly after being born, this Saturday, November 1 from 8pm in the Kilmurry Lodge. See Ger’s Facebook page.