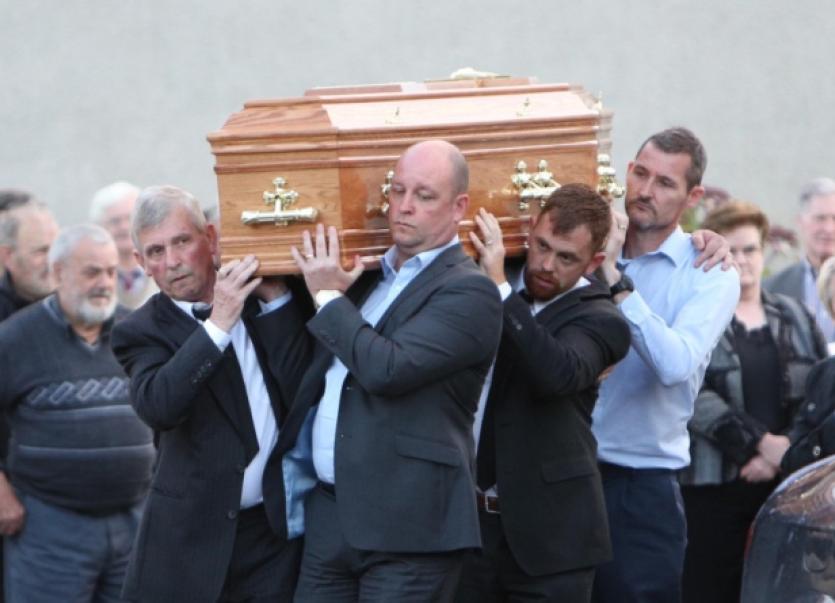 JOHN O’Donoghue “did not deserve his life to end on Thursday afternoon under those awful circumstances” when he collapsed in shock after intruders entered his home, mourners at his funeral Mass in Limerick have heard.

JOHN O’Donoghue “did not deserve his life to end on Thursday afternoon under those awful circumstances” when he collapsed in shock after intruders entered his home, mourners at his funeral Mass in Limerick have heard.

“Even the tears fell from the skies as the heavens opened with torrential rain falling for about 30 minutes while John was departing from this world,” said Fr Tony Ryan who administered the last rites to Mr O’Donoghue after he collapsed outside his home at Toomaline, Doon.

Mr O’Donoghue, 62, had just returned home with his sister Christina when they were confronted by intruders who had broken into the house.

The gifted carpenter died having suffered a massive heart attack induced by the shock of the incident. Two intruders fled the scene on foot after their getaway driver drove away without them.

“Everybody is saddened and upset at his tragic, unexpected and sudden death,” continued Fr Ryan at the funeral Mass which was celebrated in Doon parish church.

“It has been a very difficult few days for you all and we, the community in Doon, along with the many caring and concerned people from far and near gather around you this morning in our church offering our support and our prayers.”

Gifts brought to the altar during the Mass included a book. John loved to read and his book collection, mourners heard, covered history, technology, gardening, music and sport.

A hammer symbolised John’s love of woodwork - a talent Fr Ryan said, he put to good use last year to rectify the damage caused as his home during the flood in Doon. More than anything John loved his family and a timber plaque which reflected that love was also presented and placed at the altar.

Mr O’Donoghue is survived by his sisters Mary, Sheila and Christina, brother Seamus, extended family and friends. He was laid to rest in the local cemetery in Doon.

Two men have been charged in relation to the incident and are due before the court this Tuesday.