Over 3,000 set for Darkness into Light walks in Limerick 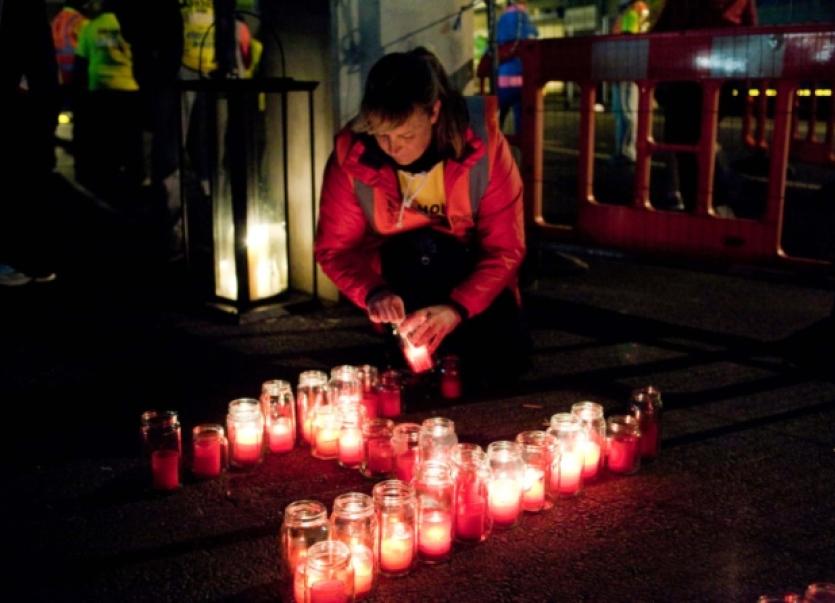 MORE than 3,000 people have registered for dawn walks in Limerick city and county this weekend to remember those who have died by suicide and to raise awareness of depression.

MORE than 3,000 people have registered for dawn walks in Limerick city and county this weekend to remember those who have died by suicide and to raise awareness of depression.

Both walks will be held in Limerick city and in Newcastle West in the early hours of this Saturday morning, May 10, under Pieta House’s Darkness into Light campaign.

At the time of writing, more than 2,200 people had registered for the walk in the city, with a further 800 people signed up in west Limerick.

Thousands of people across the country will take part in this symbolic walk at 4.15am, with some choosing the run the 5km route while dawn is breaking.

Limerick city has hosted Darkness into Light walk for the past four years, attracting huge numbers each year, while Newcastle West is a new venue for 2014. The Limerick city walk sets off again from Thomond Park, while the Newcastle West event begins at the Community Centre, The Demense.

“We’re thrilled with the registration figures so far and we’re expecting an even bigger bump in numbers as we enter our final week,” said Joan Freeman, founder and chief executive of Pieta House.

“Registration figures nationally are more than three times higher than they were at this point last year which is a great testament to the commitment of the Irish public in tackling suicide in this country,” she said. This year’s Darkness into Light is set to be the biggest one yet, as it will take place in 39 locations including London and Sydney, with an expected turnout of up to 80,000 people.

In support of Pieta House’s Mind Our Men campaign, which aims to reduce male suicide, participants are asked to bring a male friend or family member with them on the walk.

Pieta House is also urging participants to register in advance online or at one of the various pre-registration events which are being held across the county.

In Limerick city, pre-registration is available at Old Ferguson’s Chemist from 12pm to 4pm on Thursday, May 8 and Friday, May 9.

The Newcastle West, pre-registration will also take place on Friday, May 9, from 6pm to 9pm in the Red Door Gallery, Newcastle West.

The suicide and self-harm crisis centre was founded in Lucan, Co Dublin in 2006 by psychologist Joan Freeman.

It now has nine centres throughout Ireland, providing a professional, one-to-one therapeutic service for those who are experiencing suicidal ideation or engaging in self-harm. A doctor’s referral or a psychiatric report is not required and the service is completely free of charge.

Entry costs €25 for an adult, with concessions for pensioners, students and job-seekers, who will be charged €15. Children aged under 12 can enter for free but must be accompanied by an adult. All proceeds will go towards running their Mungret centre.