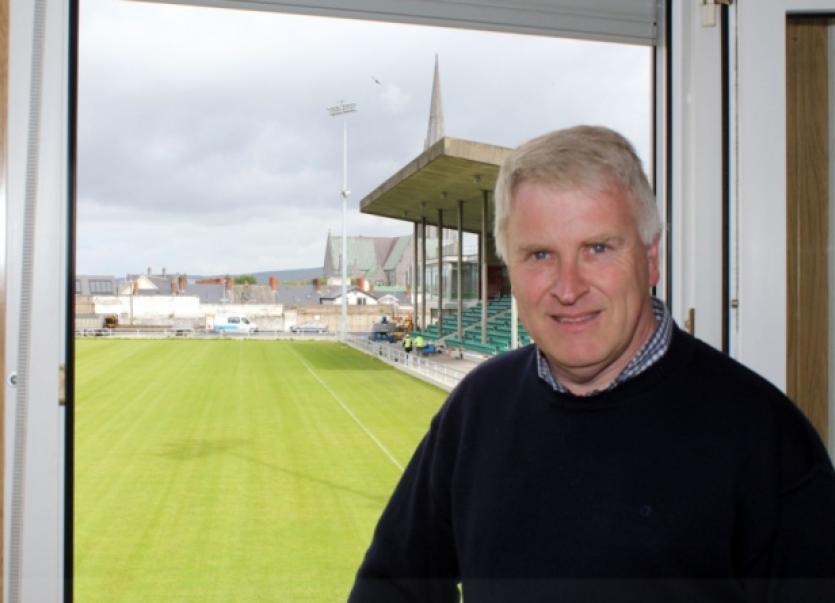 A NEW era is set to dawn for Limerick’s “iconic” Markets Field, as it re-opens this Friday night following the completion of a €4.5m redevelopment.

A NEW era is set to dawn for Limerick’s “iconic” Markets Field, as it re-opens this Friday night following the completion of a €4.5m redevelopment.

Some 31 years since it was fully operated as a soccer stadium, it has now been redeveloped with major funding made available by the JP McManus Foundation, amongst others, and plans secured for its long-term future.

President Michael D Higgins will be among those in attendance this Friday night when Limerick FC host Drogheda Utd in the SSE Airtricity League Premier Division at 7.45pm.

Pat O’Sullivan, chairman of Limerick FC, said “it was a big occasion for Limerick”, as the ground is considered to be the spiritual home of soccer in the city.

The redeveloped venue will be a Category 2 UEFA stadium with a capacity of 3,075, and the main stand will have seating capacity for 1,340.

The funding has been made available from the Limerick Enterprise Development Partnership (LEDP) and the McManus Foundation, along with significant State funding.

Mr O’Sullivan emphasised that the stadium - owned by the LEDP - will need the continued support of the community - in the bad times, and in the good.

“I had a plan coming into Limerick soccer in 2009 to finance it and keep it alive. I did it because the city was getting such a hammering with crime and anti-social issues, and I feel that sport has the ability to change a lot of people and how they live their lives, in particular soccer,” he explained.

Among its downfalls, he said, was that the club only ever had the senior team, but they “put an under-age structure in place to encapsulate the four corners of the city to bring communities together through sport”.

“The Markets Field has the potential to fulfil the aspirations and hopes of an awful lot of people in Limerick when you speak to them about sport, and about soccer. It’s the completion of a long term plan.

“I’ve spent a long time at it and it hasn’t been easy. I think it’s great for Garryowen area and the community there, and the city. Obviously I want to acknowledge the McManuses and all those in LEDP who helped.

“But now what we’re saying to the people of Limerick, who’ve said we’ll support you when you go back to the Markets Field, it’s there for them now, and I just hope people will come out and support us.

“There’s a tendency in sport in Limerick that people really start to support you when you’re winning, but like any friend in need, when you’re trying to build something you need support.”

While it has more recently been known as a greyhound stadium, Labour minister Jan O’Sullivan earlier said “the Markets Field holds a special place in the hearts of all Limerick sporting interests.”

George Lee, of the LEDP, said one of the “beauties” of the stadium project is that it is re-opening debt-free.

“That allows us the luxury of being able to establish the ground and put in place a business plan without having the pressure of ensuring the mortgage is paid every month. That means we can take a much longer term strategic view.

“This ground is for the people of Limerick, it is not just for soccer, but for every sport and other activities as well.

“Obviously, we have licensing criteria and we have to be careful of the pitch.

“Talking to Martin Russell, the Limerick FC manager, over the past couple of days, he really, really wants to get a result here on Friday night. It would be a fantastic homecoming if we could get the first three points in the bag.”