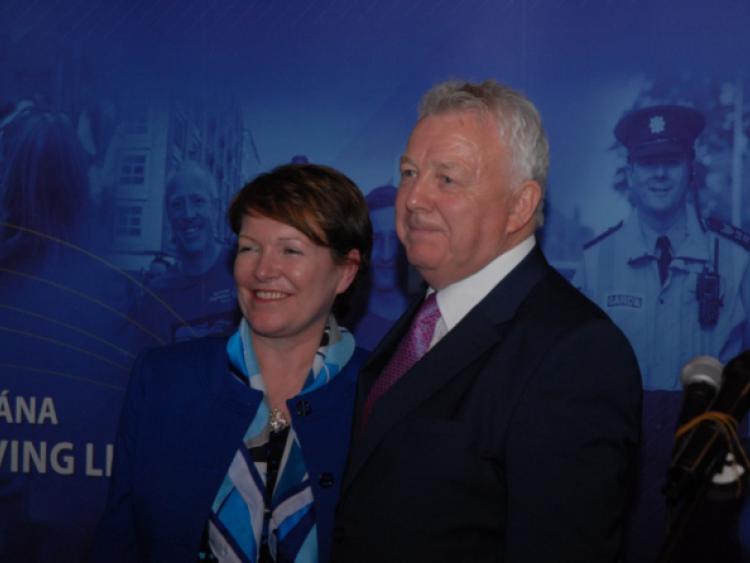 He has been punched in the face numerous times, assaulted badly on other occasions when he had bones broken, and once had to disarm a dangerous criminal who pulled a firearm on him.

He has been punched in the face numerous times, assaulted badly on other occasions when he had bones broken, and once had to disarm a dangerous criminal who pulled a firearm on him.

But for Detective Superintendent Jim Browne it was all in a day’s work. Such incidents were something he preferred not to dwell on as he and his colleagues looked back on his distinguished career with An Garda Síochána, at a special retirement function last weekend.

They travelled from near and far and Detective Supt Browne, who officially retired from his post after 40 years, could boast that even the Cabinet wished him a fond farewell, following his last day at work.

“Mr Kenny asked me to say ‘Thank you Jim’ on his own behalf and on behalf of the entire Cabinet,” Finance Minister Michael Noonan said before a gathering of over 300 people.

Friends, colleagues and victims of crime like Steve Collins attended the farewell celebration at the Ardhu bar in Limerick city on Friday night last.

They even travelled from as far as Massachusetts, with members of the state police, who Jim became friendly with over the years, in attendance.

Speaker after speaker paid tribute to a policeman who was not afraid to take on, face to face, hardened criminals and murderers, and who was appointed the first ever Detective Superintendent in Limerick to oversee subversion, crime and drugs, while also being responsible for the Armed Response Unit.

He was a ‘true blue garda’, a quality inherited by his daughter Niamh, a garda stationed in Ennis, and son Darragh, stationed in Kilrush.

Jim married Anne Connolly, whom he met while stationed in Monagahan in the 1970s. Anne’s sister Imelda is married to another Limerick-based member of the force, Supt Tom O’Connor, one of a host of speakers at the function.

Others to pay tribute included Garda Commissioner Nórín O’Sullivan, Steve Collins, and crime journalist Paul Williams. The commissioner praised Jim’s commitment to the job and how he looked after the victims of crime and ensured that the law was enforced.

After three years stationed in Monaghan, Jim arrived at Mary Street garda station in 1978 and in 1981 was put on a special task force to stop subversives involved in serious crime, including bank robberies.

Jim, a native of Cork, first hit the headlines as a very talented footballer playing for Limerick and Claughaun with distinction over the years. He has won five senior football championships with Claughaun and also can boast to having a senior hurling medal. He twice captained the football team.

“Great credit was paid to my colleagues and to myself in relation to what has happened in Limerick over the past number of years and am I delighted that the commissioner came down, that the minister expressed gratitude on behalf of the Cabinet and recognised the work done – and the fact that Steve Collins said some kind words,” he said.

Mr Collins, whose son Roy was murdered by members of the Dundon gang in April 2009, attended with his wife Carmel and son Steve junior.

“We will always be in his debt. He always looked after us. He always had a great interest in our case and he made promises to us and he stuck to them and kept them. He saw it right through, right to the end,” said Steve.

Over the years, Jim was forced to deal with many serious criminals from the Keane/Collopy gang who “were the first real gang to express their power with firearms and brought violence to a new level,” as well as the Kellys and Dundons.

In 2007, one third of all the shootings in Ireland were carried out in Limerick as the infamous feud took hold.

There were 103 discharges of firearm that year. Jim and his colleagues held 450 searches for arms and took “huge amounts of arms” out of commission.

And while things have improved, he is well aware that his colleagues are not going to take their eye of the ball, as only three years ago a cache of 28 hand grenades, a machine gun and two semi-automatic handguns were found.

“I was proud and honoured to have worked with my colleagues in detective branch who operated to the highest ethical and professional standards,” he said in his parting words.