Then & Now: We are blessed to have St Ita’s in Limerick 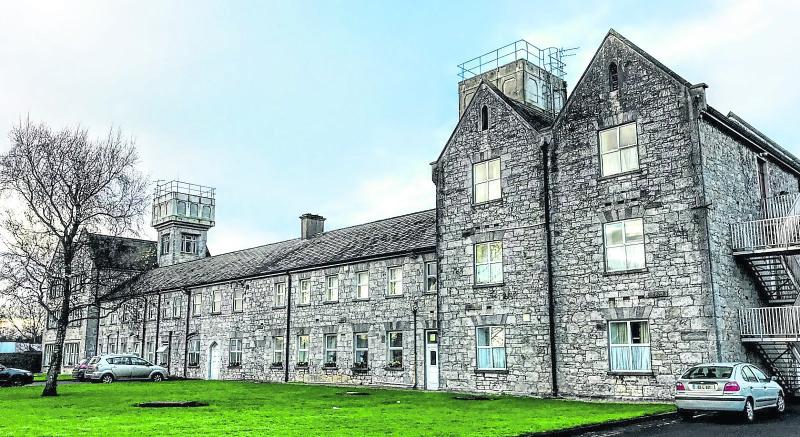 SAINT ITA'S Community Hospital in Newcastle West provides a great service of care to the people of West Limerick. It was called after St Ita who held a cherished spot in the affections of the people, who named girls, schools, churches, halls, houses, roads, housing estates and sporting clubs after her. The hospital was originally the Workhouse in Newcastle West, and it was opened in 1841. Thomas Deene from Cork was the main contractor, and the contract for the building was for the sum of £ 7,850 and the building was to cater for 550 inmates. The building is located at Gortboy on the northeast edge of the town on a site formerly named Hayes's field.
The plan of the building was intended to be of the cheapest description, compatible with durability. The walls were of limestone rubble masonry whitewashed on the inside but unflustered. The ground floors were of mortar and clay and the upper floors of timber, with raised sleeping platforms on either side of a well.
Later it was thought that the ground floors should be flagged. The exterior stone walls with iron railings and gates were built in front and a ditch of clay and stones at the rear. Separate yards for males and females were laid out and finished with paving channels. It covered an electoral area of 207 miles and catered for the Abbeyfeale, Ardagh, Ballingarry, Castletown, Dromcollogher, Killeedy, Kilmeedy, Mahoonagh, Monagea, and Newcastle West areas.
A Master and Matron were recruited, and a doctor, teachers and chaplains followed. Bills were accepted for items as miscellaneous as bedding, clothing, furniture, shoes, straw, stones, gravel, oatmeal, milk, bread, salt and horse hire. Also, in advance of admissions details of a frugal diet were published, consisting of oatmeal stir-about and new milk for breakfast, and potatoes and skimmed milk for dinner.
The 'Poor Law Act' became law on July 31, 1838, and its function was to aid the poor in Ireland. At a meeting held on March 6, 1841, it was decided that St Ita's was to be opened for the reception of paupers. The first admissions followed on Monday March 15, 1841, with the first inmates 72-year-old Thomas Danielson of Killagholehane and Catherine and Mary Quinlivan from Newcastle West. A further 54 people were admitted by March 20, and the ages ranged from 1-90 years. Some were clearly family admissions, in whole or in part. The first known death recorded was of Mary Lynch, on April 17, 1841. In the 1840's the workhouse was a forbidden place.
Interesting to note is that not far away from St Ita's is a graveyard where the dead for the hospital were carried to finally rest in peace. There is a cross erected here , which dates back to 1861. A plaque in the graveyard commemorates Paddy Flanagan who is buried in the graveyard, who with Jim Quinn found the Ardagh Chalice in September 1868. The graveyard itself is well kept; footpaths have been laid and trees have been planted there. Victims of the great Famine of 1847/48 were buried here, together with people who had no graves. Now known as the Famine Graveyard Mass is said here each year.
In the year 1919 a circular was issued indicating that the Poor Law Unions should be abolished and that selected hospital workhouses were to be converted into county hospitals and county homes. It was decided that the workhouse in Newcastle West was to come under the control of Limerick County Council and subsequently under Limerick's Health Authority and as a result of the Health Act 1970, the Mid Western Health Board. Major renovations and alterations have taken place since 1971.
The Government published a report on the elderly in 1988 entitled 'The Years Ahead' and in line with the report and a subsequent meeting in Newcastle West in April 1989 held by the board, a short stay Assessment Rehabilitation Unit with day hospital facilities at St Ita's was enabled. The necessary implementation was established, and the first phase of the unit became operational on September 25, the same year.
There have been many improvements to the hospital over the years and in particular in recent times thanks to the fundraising efforts of the Friends of St Ita's. The Pallative Day Care services opened in 2009, a dedicated ambulant dementia unit was opened in May 2014 and the new Rehabilitation Unit was completed and officially opened in early 2016. St Ita's Hospital continues to grow in strength and now provides the highest standard of care to its patients.

In Pictures: Two Limerick festivals team up for second year in a row

Their top priority was the provision of a hospice support unit for West Limerick which became the main focus of their fundraising. In the first six years of fundraising, they raised in excess of €2 million from fundraising events and a generous allocation of € ¾ million, from the J.P. Mc Manus golf Pro-Am in 2005. In addition to the Hospice Unit, they have also funded a number of other projects at St Ita's including the provision of a new dayroom for Ward 6 at a cost of €200,000.00, a new patient minibus costing € 64,000 and other essential equipment for the patients. The ongoing improvements funded by the Friends continue yearly under chairperson Fergus Scanlan.
AUTUMN MELODIES: A new CD in aid of Friends of St Ita's titled Autumn Melodies will be launched this Friday for people to enjoy and to support the work, the Friends continue to do at Newcastle West Community Hospital. The CD is produced by Theresa Doyle Mc Mahon and Siobhan Doody well known singers around the locality. The launch of the eagerly anticipated CD will take place at the Longcourt House Hotel on Friday September 23 at 8pm. Entry is free, and the CD will be for sale costing € 10 on the night. There are songs to suit every taste on the CD all from local artists. The artists featured include Siobhan Doody, Theresa Doyle Mc Mahon, Michael Enright, Brian Hartnett, Emmet Scanlon, Michael Nash Fr Tim Curtin, Canon Tony Mullins, Fr Liam Enright. A great night of entertainment provided by the artists and others is promised and all support will be appreciated.