Signing off City View: 'I believe in Limerick but we need to engage and ask questions' 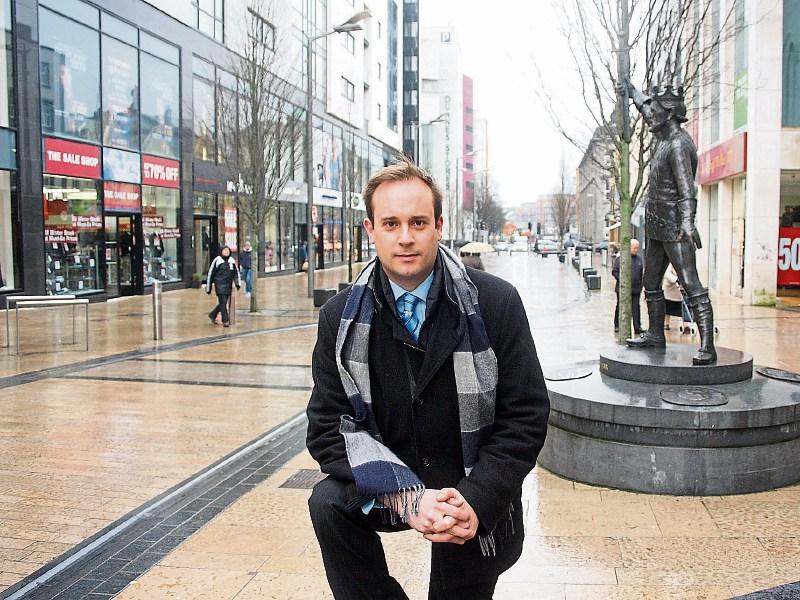 Standing up for Limerick: Nigel Dugdale pictured by Michael Cowhey on Bedford Row

ALMOST four years ago I received a phone call from then editor of the Limerick Leader Alan English. Over the course of the conversation he asked me if I would be interested in taking on the role of writing this column every Wednesday.

I embraced the opportunity with open arms. I must thank Alan and the team at the Leader for giving me a platform to put across some of my own thoughts and opinions on the Limerick of today.

During the last four years this column has focussed on the positive aspects of the new Limerick. It has covered the development and progress of the Limerick 2030 plans.

This column was an advocate for Limerick’s year as National City of Culture, particularly at a time when many were critical of how it was being managed.

It has covered the many welcome jobs announcements we have seen. This week we saw a report from Irishjobs.ie which highlighted how Limerick is leading the way in terms of job creation.

There have been some who have criticised me for my ‘blind positivity’, somehow suggesting that I was an unofficial spokesperson for the local authority or other official entities.

This was never the case.

I believe in Limerick. I think the opportunities our city and the region have in terms of moulding a new city and shaping a prosperous and forward-thinking new future are palpable.

Our recent history will show a time when Limerick’s reputation was in tatters. Recent years have seen tremendous moves being made to rethink how Limerick tells its story. The results are there for all to see.

As we now face into a period of what is hoped will be strong economic growth both nationally and locally we find Limerick in a place where we really can use the new-found self-belief to develop a city and county that really does rival any of our other neighbours.

We do need to be careful, however. We need to question the decision-makers. We need to engage constructively and always ask if the direction the new Limerick is headed is the right one.

I took on this column with no track record as an economist, as a city planner, as a cultural expert or as a journalist for that matter.

The opportunity the team at the Limerick Leader gave me has allowed me to develop a deep interest in how our city is run. I have never been stuck for something to comment on and the process has been a deeply rewarding one.

As with any role there does come a time when you must move on. This will be my final City View.

Many thanks to @nigeldugdale, signing off as a @Limerick_Leader columnist today after four years of passionate advocacy on the city's behalf pic.twitter.com/jyxM8BgOny

I want to thank all those who have read this column over the past four years and hope that in some way it has managed to stimulate some form of conversation about Limerick and the opportunity its future presents.

As Limerick starts to reap the rewards of years of planning and stakeholder collaboration it could be easy to forget that every one has a role to play in ensuring our city’s future is a good one. It is therefore crucial we continue to engage, ask questions and demand that direction our city is taking is in the best interest of all its citizens.

Very much enjoyed being small part in this process for @Limerick_Leader - @nigeldugdale will be missed https://t.co/eMgyF7WKbI

Columns by @nigeldugdale have been a lesson in engaged citizenship. His City Views will be missed! https://t.co/H66BkQE6Sl

Kudos to @nigeldugdale for years of his work, his writing and his positivity. The pure graft has always been evident to all. https://t.co/SAiBDYlPrc

Thanks @nigeldugdale your unrelenting positivity and proactive "nudging" kept the city moving through some dark times.

Best of luck with future projects @nigeldugdale I don't doubt you will continue to fight the good fight for the future of Limerick.

Best of luck in what you do next Nigel

Best of Luck in your new ventures, and many thanks for your contribution to Limerick City