Wild About Wildlife: Song remains the same for thrush 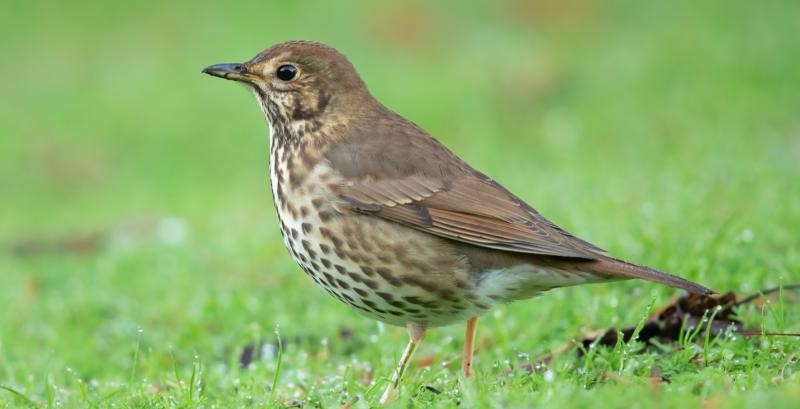 Although a regular visitor to gardens, song thrushes can be tricky to lure to feeding stations and generally keep their distance from bird tables or ground tray

WE WERE driving along the path of the abandoned convent after spending an hour discovering the interesting plants and flowers in the garden. This diversity of plants and the fact the no chemicals have been used for a decade means that there is also plenty of wildlife living there.
At the edge of the path I spotted a song thrush and he was trying to break a snail shell on the hard surface of the road. The poor snail was in his beak and it was not the neat affair I imagined. Normally we find the broken shells around the thrush’s anvil and this is a favourite stone that they use every day. There may be several of these stones scattered throughout their territory and they are usually rounded in shape.

As we watched the thrush picked up the snail several times and banged him of the ground. He would drop the snail for a few seconds before returning to his breaking. We drove a little closer as I was hoping to get a short video.
We could see his distinctive warm brown back and specked breast but he got scared and flew away and perched on the branch of a tree. He waited patiently for us to move on as the thrush had put a lot of energy into breaking the snails shell and he was not willing to give up his hard earned meal.
Having birds in the garden is not only very enjoyable but only helps with the control of creatures that eat our plants and carry diseases and viruses.
Back in the polytunnel the dahlia are in flower. I have been observing what insects have been visiting them for the last week and they are proving excellent for pollinators. I have seen several worker bumblebees with their legs weighed down with pollen feeding on the flowers. The flowers are also wide open and are very easy for the bees to access.
There has also been hoverflies and at a causal glance around 12 species of flies. These insects are also the forgotten but equally important pollinators. This is mainly due to their large populations rather than any special body adaptations.
These dahlias are in pots and once they finish blooming we can move them out and bring in new flowers. This will ensure a continuous succession of nectar and pollen packed flowers for pollinators.
During the week I got a real surprise and treat as I was working and chatting with a colleague. He has just been telling me that on his way into work he had come across a beautiful young fox killed on the road.
Data on annual mortality for foxes on our roads is hard to find but one figure I came across for England is 1000,000 and it would interesting but grim to see the results for Ireland.
He has also put up a sign on his boreen asking people to slow down as he has lots of red squirrels there. This is a great example of practical and positive conservation and it also helps to raise people’s awareness.
Suddenly a very young fox cub ran past and he was still in his juvenile fur, an almost greyish colour. He had been disturbed in the vegetable processing shed tucking into a slice of pizza. This pizza could have been discarded after the weekend and one of the main reason foxes are so successful is their ability to adapt to new environments and food sources.
This fox shot out the door still carrying his pizza but in his haste to escape he dropped his food. He paused and thought about going back for it but fear got the better of him and he headed down towards the pig compound.
They have a well-hidden den down there and the farm makes an ideal hunting ground for them. They also eat a lot of rodents and this is one good measure for helping to keep their population under control.