Spotlight: Rebel with a cause... 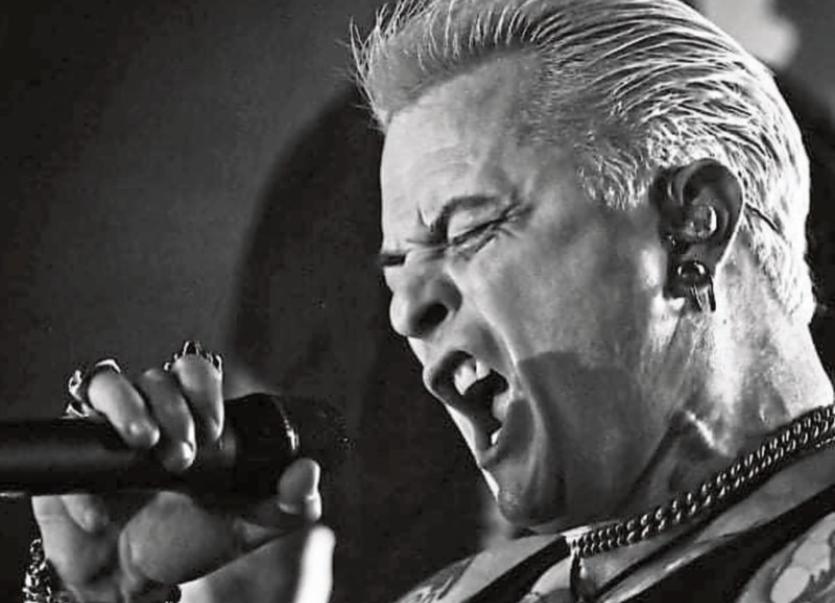 DannY Bullman was born in Limerick in 1971 and grew up in St Mary’s Park. He is a songwriter, fronting the band Black Mariah and now lives in Austria. He also has a tattoo studio in Thomas Street, Limerick for the last 22 years which he started with his brother Seán, who now runs that business. Danny is a rebel with a cause and that cause is making great music that vents the rage of a generation of like-minded souls in a subculture that has felt excluded and marginalised by mainstream values.

As a child, Elvis was his hero. At the age of five he could sing nearly all his songs! At that time, in primary school, it wasn’t uncommon for the teachers to get him singing Elvis hits, while standing on a table at the top if the class!

He attended Christian Brothers, Sexton Street, which, he says, “Definitely was not a positive experience.” He believes he was corralled into subject ‘choices’ that neither suited his aptitude nor interest and feels aggrieved at, “Not being allowed do some of the classes I wanted to do, like art, for example” adding, “I have never had an art class in my life, yet I can carve, sculpt, engrave, paint, draw etc.” Clearly Danny was undeterred by that obstacle in his ambitions.

Reflecting on school life as a teenager Danny says, “Individuality seemed like it was frowned upon and if you thought or looked different you were pressed to conform.”

When Danny did share his dream he was told he would have no future as a tattoo artist and that there wasn’t a future in music either. Obviously Danny didn’t let that stop him. “I was always told in school that I was a dreamer, like it was some kind of insult” he says and adds, “But my mother always said that the world was built by dreamers. Become whatever you want to be. What your mind can conceive your body can achieve.” However, Danny want’s to acknowledge that, “There were some great teachers in Sexton Street too”

Bullman was never in a band in Limerick but most of his friends were musicians. He explains, “I was more concentrated on my tattooing back then, to the point of actually selling a guitar to buy some tattoo equipment!” He has been in other bands before Black Mariah – Auslander and Head Rush. Although Bullman plays guitar he is lead vocalist in Black Mariah with Steve Destiny (Bass), Jimmy Spike (rhythm and lead guitar) and El Farido (drums).

The cover of the album was designed by Limerick digital artist, Ken Coleman. In several reviews the band has been compared to Iron Maiden, Motörhead and Thin Lizzy.

Rockvideos, said about a live gig, that there were, “Shades of Motörhead, Thin Lizzy and Iron Maiden evident in anthemic songs that rattle your bones often times making excellent use of harmonics and driving beats.”

Metal-Temple said, “Their sound might be described as a mixture of bands such as Thin Lizzy, Motörhead and Mötley Crüe, with a signature of two guitars bringing twin harmonic solos as well as dual harmonic rhythms, it packs a serious punch.”

I asked Danny, “If you could only have one album what would it be? His answer: “Live and Dangerous, Thin Lizzy.”

Bullman moved to Austria about twelve years ago, explaining, “I moved here mainly because of the music scene. There is a venue for every genre of music and pre-covid there was a gig nearly every night to suit your taste.”

Before pandemic restrictions kicked in Black Mariah had already started pre-recording new material. “So as soon as we can we have to get back working on that and some other material that has been written since” Danny says.

He has been involved in many music productions including commissions to write songs for other projects. He informs me that Black Mariah did one song written for a specific compilation album which featured several legendary rock bands. Danny also had a second song on this album with a band he put together especially for it, called Wildstyle Allstars, featuring Danny on vocals, Richard Fortus (Guns ‘N’ Roses) on guitar, legendary guitarist Steve Saluto, Marco Mendoza (Whitesnake) on bass and Tim McCarver (from Murder FM) on drums. This album was the first rock album in twenty years to break into the Austrian mainstream charts. It entered at number three!

Black Mariah has an International following also. “It always surprises me how many people know the band. I have seen people wearing our band’s t-shirts in cities as far apart as Toronto and Moscow” says Danny.

Danny laughs as he describes his music as “Anger-fuelled rock n’ roll filled with decadence and attitude.”

Before lockdown the last gig that Black Mariah did was a double headline with a band called Sulphur. The bass player is from Marilyn Manson, the guitarist from Prodigy and the drummer from The Jesus and Mary Chain, Rob Holiday is both bass for Manson and guitar for Prodigy.

We talked about Black Mariah’s YouTube video/song ‘Killer Inside’ and Danny explained - “The song is about the ability in man to kill. I wrote it after watching so much violence and war on the news and after a visit to the military museum in Vienna. I came out of there in a sombre mood, shocked and saddened by what I had seen and how many different ways man has invented to kill, torture and maim each other. If you watch the video closely you will see the ‘killer’s’ makeup moving from person to person to show that everyone has the ability to kill. With all of mankind’s beauty – we have created art, architecture, poetry, etc. – yet man can be a very callous and brutal creature.”

Bad boy he is not! Danny is a sensitive and kind person with a caring heart and that is very evident. He admits that a lot of Black Mariah’s songs are “anger-fuelled” but he clarifies,

“We always try to put lyrics to music that uplifts. Some of the topics can be quite difficult – depression, addiction etc. but I am not a lover of music that brings you down.”

I asked if, as he says, his music is anger-fuelled, “What are you raging against and what do you stand for?”

He opened up, “Some of the more personal songs relate to my experience. For example, ‘Hate’ is about how I always felt and was treated as different due to how I looked. Being heavily tattooed was frowned upon in society back then. I was not left in to bars and clubs when I was younger. Today it’s normal, for many, to have tattoos but back then I could hear the whispered comments of disapproval.”

Despite being told he had no future the catch line in the song is about him being above all that and how hate was too strong an emotion to waste on people like that. “If you have a dream or an idea, follow it through” Danny advises, adding, “The only person that can stop you achieving your dream is yourself, nobody else’s opinion really matters.”