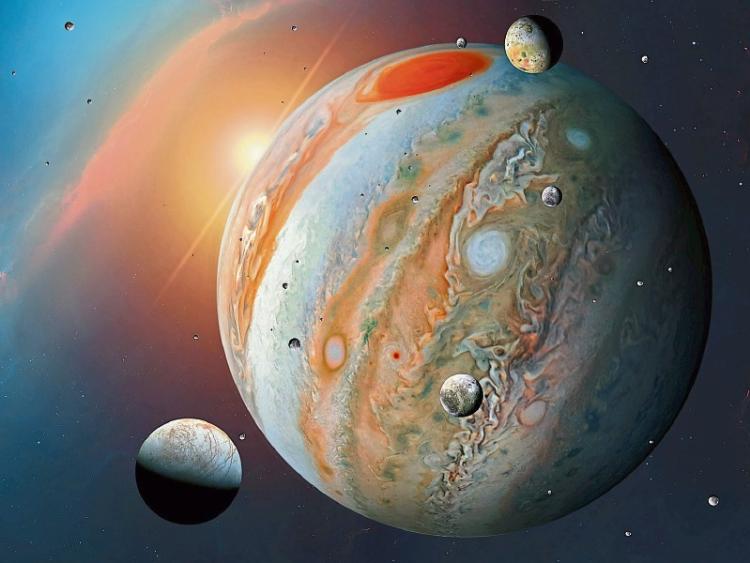 Jupiter is the fifth planet from the Sun and the largest in the Solar System and is one of the gas giants. It is the third-brightest natural object in the night sky (after the moon and Venus) and is named after a Roman god. Jupiter has 79 known natural satellites (53 have been named and 26 are still waiting for official names) of these 60 are less than 10km wide. They can be classified into three different categories, Inner, Outer and Galilean.

The inner moons are those which orbit closest to Jupiter and they are sometimes known as the Amalthea group. This category includes moons such as Metis, Adrastea, Amalthea, and Thebe. The other moons are known as irregular moons due to their eccentric and distant orbit paths. These are the furthest from Jupiter and are considerably smaller objects. It is thought that many of these moons are captured asteroids pulled in by the gravitational forces of Jupiter.

The third classification of the moons of Jupiter are the Galilean moons which are the largest four moons of Jupiter; Io, Europa, Ganymede and Callisto. These were discovered by Galileo in 1610 (hence where the name comes from). They each have a radius larger than any of the dwarf planets and they are some of the largest objects in the solar system outside of the eight planets.

Io is the most volcanically active body in the solar system and its surface is a colourful collaboration of different forms of sulphur. The immense gravitational pull of Jupiter causes gravity pulled tides on the surface of Io that can rise up to 100meters high that end up creating enough heat for the volcanic activity to drive off any water. The surface of Europa is covered in mostly water ice, with evidence of this suggesting that it may be covering an ocean of water/slushy ice. In-fact it is thought that there may be as mush as twice the amount of water on Europa compared to Earth. Ganymede is the largest moon within our solar system, indeed it actually is larger than the planet Mercury. The size of this moon means that it is large enough to actually generate its own magnetic field. Callisto is the second largest moon orbiting Jupiter and the third largest overall in the solar system.