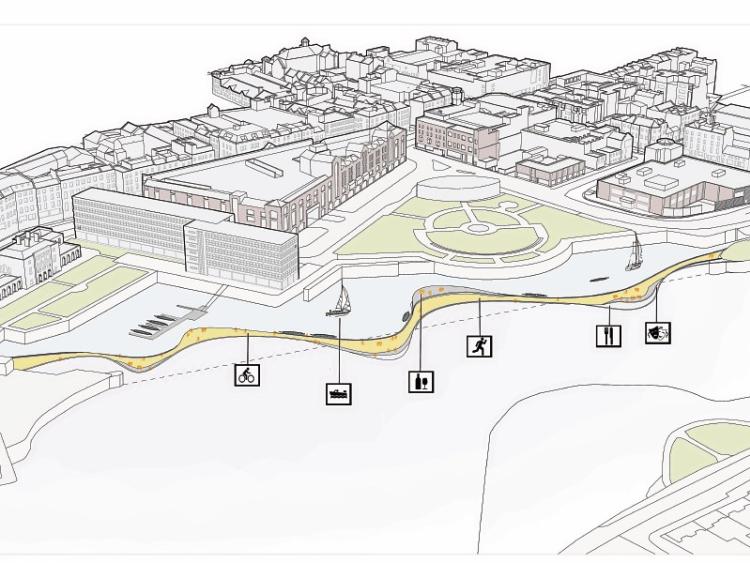 The Leader is backing this dramatic floating boardwalk across the Shannon as alternative to the footbridge, which has been proposed by Healy & Partners.

IRELAND is a very small country on the outer edge of Europe and its cities, including Dublin, are tiny in global terms. Limerick is one of our even tinier cities and it needs ambition and big ideas if it is to prosper in competition with our other cities.

One such idea is the proposal for a pedestrian footbridge between Arthur’s Quay Park and the County Courthouse on Merchants Quay. As I understand it, the idea grew out of Fáilte Ireland’s advice that Limerick needs an “iconic” project so distinctive that it will inspire visitors to come here.

The idea as proposed fails so fundamentally at an urban design level that it needs to be challenged. It also fails the ‘iconic’ test, as it falls into the ‘me too’ category and is too small in cultural content relative to what could be achieved with the same resources allocated to other more powerful ideas for invigorating the urban life of Limerick for both its citizens and its visitors.

I hope this article will inspire the generation and ventilating of other such ideas.

On the urban design argument, bridges are conduits for human traffic. They are typically built to satisfy a demand to get from A to B by a more convenient route. It is also desirable that they should be structurally elegant and architecturally memorable. The Ha’penny Bridge in Dublin and the Living Bridge in UL are good Irish examples.

I know of no bridge where its genesis is solely the experience of being on it, especially where an equally convenient and more attractive route is already available along the same river shore.

Limerick does not need a bridge as a shortcut over a short stretch of water parallel to the river bank, between two points that do not have a compelling, or even lukewarm, need for connection.

Nor do we need another way of viewing the river or King John's Castle. There are a multitude of existing vantage points for doing that.

We do need an attractive, permanently open and welcoming riverside route for pedestrians from Arthur’s Quay Park to King John’s Castle as part of the completed riverside loop envisaged in the Limerick Economic and Spatial Plan 2030. ( More about the latter later ).

The best way to achieve this is to open up the route that is already there, through the Hunt Museum park, across the Sylvester O’Halloran Bridge (appropriately modest in its proportions in relation to its surroundings), through the Potato Market (destined to be transformed into a public park in the 2030 plan), past the impressive elevated presence of the medieval St Mary's Cathedral, arriving at ‘Point B’, the County Courthouse .

This opening up can be done by eliminating the ugly steel barrier at the ‘nose’ of Sarsfield House, which is long overdue a remedy. The proposal to demolish Sarsfield House in the 2030 plan should not delay this initiative, given the uncertainties that surround that proposal.

Why devalue the experience of walking through such a seminal sequence of Limerick’s riverside urban history by prioritising a marginally shorter new route over water, at great expense, and whose physical presence competes unnecessarily with such an impressive sequence of existing spaces and buildings while diluting their historic relationship to the river ?

Which leads me to the bigger aspiration that must be part of this discourse — the completion of Limerick’s riverside walk as an uninterrupted loop between our Thomond and Shannon bridges, open to its citizens and visitors for 12 months of the year as an enjoyable and safe public amenity.

To do this we need to make progress on opening up permanent access to the rest of the riverfront past the courthouse (the relocation of the courts to Mulgrave Street in 2017 will facilitate this) and City Hall and on to King John’s Castle, and to make the connection from Sarsfield Bridge to Arthur’s Quay Park far more pedestrian friendly .

Such a completed riverside loop walk has the potential to be iconic, insofar as it can become the great public recreational space of the city all year round – with the crucial proviso that it is managed in such a way that it is safe at all times for its users.

Our climate has proven not to be the deterrent one might imagine given how well the recently completed elements of the loop, to a laudable standard of civic design, are used in all seasons .

The establishment of such a complete urban amenity would set the scene for inspiring other waterfront projects that would further enhance the overall quality of urban living in Limerick. The creation of this kind of visibly happy environment for local people will also attract visitors.

There are many possibilities for significant waterfront projects. Here are three suggestions:

*A creative hub for the arts on the architecturally fascinating site of the defunct Condensed Milk Company (known to many as Cleeve’s) which had over a thousand employees in its heyday, exporting produce manufactured from local natural resources. The site could be a great arts, crafts and artisan food destination, as a balancing focal point at the opposite end of the riverside walk to John’s Castle.

*A new public library on the Dunnes Stores site at Sarsfield Bridge. Public libraries have been reinvented for the digital age with great success in other cities as education/information resource centres and community focal points that provide almost unlimited access to information and an open and welcoming environment in which it can be shared.

The new library in Dun Laoghaire is an inspiring example of this kind of civic architecture. The fact that it would be on a site that is on the gateway of Sarsfield Bridge into the city and overlooks the river and would become part of the amenities of the riverside walk would make it even more valuable as a social and cultural resource .

*An international competition for a public sculpture or installation on the river that reflects the history of Limerick city and its relationship with the river Shannon, to become a landmark for the city .

To conclude, it is important that we have more ideas like this for public debate — such as John Moran’s recent proposal to make Limerick Ireland’s urban counterpart to balance the economic magnetic effect of Dublin - and that they are argued on their merits rather than imagined or presumed motives.

Equally, ideas that advance the fundamental character, culture or infrastructure of the city should not be inappropriately contrasted with the provision of the basic fundamentals of a properly managed city, such as housing, health care and education.

We must find ways of doing both if Limerick is to become the thriving metropolis that it is only waiting for us to imagine and realise together.