City View: Limerick city centre is in need of a design for life 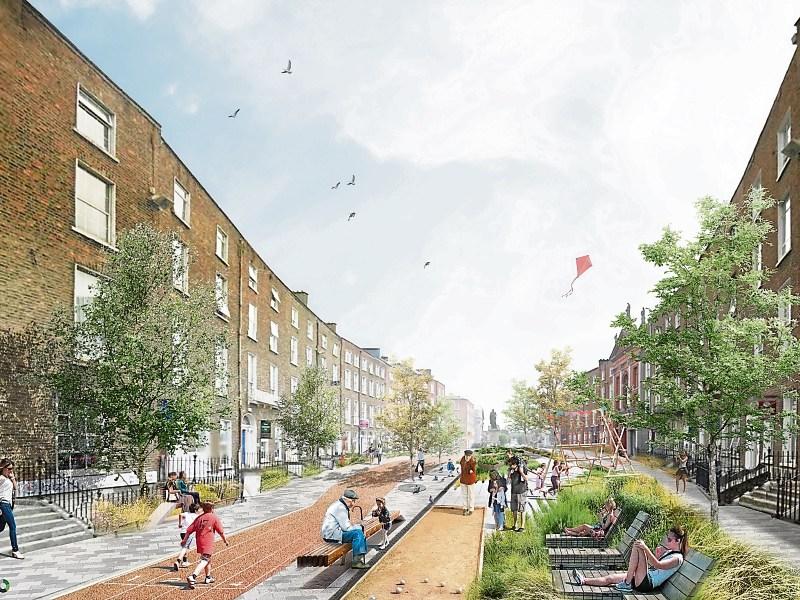 Limerick needs to focus on how it is designed. This visual was one of a number of designs for O'Connell Street drawn up by Mick Bradley in concert with John Moran during the #LiveableLimerick debate

THERE was an article in the Journal.ie last week that focussed on the regeneration of Westport.

The word regeneration is one we have become very accustomed to using here in Limerick over the past decade. It is a word that has become associated with knocking houses, relocating communities and attempting to solve issues of social exclusion and unemployment.

In Westport’s case it is a word that is associated with design, public realm and placemaking.

The article noted that the work done in Westport has resulted in the town now boasting 90% commercial occupancy and one of the few western towns that has witnessed a population increase over the past number of years.

Westport was voted the best town in Ireland in 2012 and this year was named Ireland’s Tidiest Large Town at the annual Tidy Towns awards.

Mayo County Council architect Simon Wall has worked closely on the ‘regeneration’ or Westport. Speaking to Paul O’Donoghue at Fora.ie he said: “Instead of celebrating the millennium by creating a sculpture of etching the town’s name on a piece of stone, we commissioned an intellectual gift for the town: a town design statement which sketched out all the future development for the next 20 to 30 years.”

We all know the work being done in Limerick to deliver the 2030 project. We have key inner-city sites. We have a plan. We have a vision.

What is possibly missing is a focus on the importance of design as a key part of the 2030 project. We are hearing a lot about the provision of job creation. Limerick is determined to deliver enough commercial space to attract thousands of new workers into our city centre.

The provision of such space is, of course, a crucial need. The presence of well-paid employees in the city will have an impact on other areas. Footfall will increase. Retail offering will improve. Private developers may then consider providing quality (and much needed) residential. The evening economy will see a boost.

The Project Opera site is looking like it will have little or no residential, very little retail or ground floor public use and will have a public plaza that looks set to become a dead space at night.

Nicholas Street, the oldest street in the city, is a classic example of how ‘regeneration’ has ignored the potential of quality design interventions.

Johnsgate is an example of a new urban ‘village’ that once had great potential but has now become a no-go area.

Cruises Street was once deemed to be an addition that would breathe new life into the city. However, it lacked above the shop residential. It’s shop units were limited in size. The number of post 6pm restaurant, bar or cafes on the street were minimal.

Bedford Row gave us a new pedestrian retail street. It has struggled to capture footfall.

The work that has been done in Westport has clearly worked.

Any case study which has been done on that town always mentions the county architect and the work he and his team have done to place design and quality public realm at the centre of everything they do.

Limerick is at a crossroads in terms of the decisions we make that will shape how our city looks and feels. Of course, we will want people to work here but we will also want those who work here to feel they are part of a modern, attractive and vibrant urban environment.

I would now like to start hearing more talk about the importance of design in terms of Limerick’s future.

Limerick Museum hits the county with a travelling pop-up show

Limerick Museum in association with Creative Ireland are organising a Travelling Pop-Up Museum in County Limerick. A pop-up museum exists for a few hours on one particular day and is created by the public.

The aim of the Limerick Travelling Pop-Up Museum is to create conversations between people of all ages and walks of life. People will be invited to bring along their objects and Museum staff will assist them to write a label describing what the object means to them. The object will be then put on display.

At the end of the session, the objects will be returned to their owners. Locations for the Limerick Travelling Pop-up Museum are: Adare - 14 October - 11am-4pm at Adare Community Hall.